It's been a month since I checked in with our active planetary spacecraft; let's go again from the innermost to the outermost reaches of the solar system and see what's going on. One of the most important meetings for planetary scientists, the American Geophysical Union (AGU) meeting, begins in San Francisco only a week from now, so next week should be a good one for space science news. I'll point out mission-specific sessions at AGU as I go; times are in Pacific time, and the four-character codes point to pages on the AGU website where you can see the complete list of talks or posters to be presented at each session. I don't have time to read over the entire AGU program myself, so please feel free to point out intriguing-looking presentations to me and I'll try to follow up on them to find out more.

As I mentioned last week, MESSENGER is in the middle of performing a major Deep Space Maneuver, firing its rockets once last Friday and once today to set its course for next September's flyby of Mercury, its third. Results from the second flyby (the one that happened on October 6) will be presented to the scientific community for the first time at AGU in two oral sessions on the morning of December 15 (08:00, U11C, and 10:20, U12A) and a poster session at 08:00 on Tuesday (U21A). The first Monday morning session, which goes from 0800-1000 PST (1600-1800 UTC), will actually be webcast live; watch the AGU website for a link to that.Venus Express is still in orbit at Venus; there was a publication last week in Nature about how Venus Express scientists think they may have explained Venus' banded appearance when seen in ultraviolet wavelengths. I've printed the paper out and hope to be able to read and comment on it this week. I now know that the current mission extension for Venus Express runs through April of next year. ESA hasn't yet made a formal decision on whether to extend it beyond that, but my guess is that they will. There's no specific Venus Express sessions at AGU but plenty of stuff from that mission in the Exploring Venus oral (Tuesday 10:20, P22A) and poster (Wednesday 13:40, P33A) sessions.

Venus Express Scientists now believe they understand why Venus appears banded in ultraviolet wavelengths, something that's been a mystery since Mariner 10's flybys of the planet. The animation represents a quick view of part of a Venus Express orbit, captured through the Venus Monitoring Camera (VMC)'s ultraviolet channel. The images were taken about an hour apart as the spacecraft approached Venus. Venus Express' orbit is polar and highly elliptical, with its closest approach near the north pole, so it spends a great deal of time over the south pole. The orbit is exactly 24 hours long, which is designed as a cost-controlling measure; Venus Express can always communicate with Earth from the same position on its orbit and use ESA's own deep-space radio communication antenna in New Norcia, Spain.

Things are quiet at Mars right now because we're in the middle of conjunction and aren't getting much data out of the five active missions. Which means that Mars scientists are very busy preparing papers for publication and talks and posters for AGU. AGU will contain the very first results ever presented at a scientific meeting on Phoenix, which will be a big deal. Posters are at 08:00 on Monday (U11B), and the oral session is at 16:00 Monday afternoon (U14A). There's also a full slate of sessions on Mars Reconnaissance Orbiter results -- oral at 08:00 Wednesday (P31D) and 10:20 (P32B), and the posters at 08:00 on Thursday (P41B). There are no specific Mars Exploration Rover sessions at AGU, but two on "Landed Measurements on Mars: Ground Truth for Orbital Data" that feature mostly rover-related talks with a bit of Phoenix thrown in. The oral session is on Wednesday afternoon (13:40, P33C, and the poster session is on Friday afternoon (now that's an inconvenient bit of scheduling, 13:40, P53A). Aside from these, there are tons more Mars sessions on more general topics at AGU that are too numerous to point out in detail. There are sessions on geology and geophysics, on fluvial (river) systems, on comparative planetology, on atmospheres, on volcanism, on the prospects for habitability on Noachian Mars, on sulfate geochemistry, and on life detection. The whole list of planetary sessions can be viewed here; except for Phoenix, most of the Mars stuff happens later in the week, Wednesday through Friday.

Also, I'll note that the Mars Reconnaissance Orbiter HiRISE team has released two images (here and here), the first public releases from their camera that cover the rest of the ground between the Opportunity rover and its eventual destination, Endeavour crater. You can see all the latest images from Mars Reconnaissance Orbiter here, and all the latest from 2001 Mars Odyssey THEMIS here. 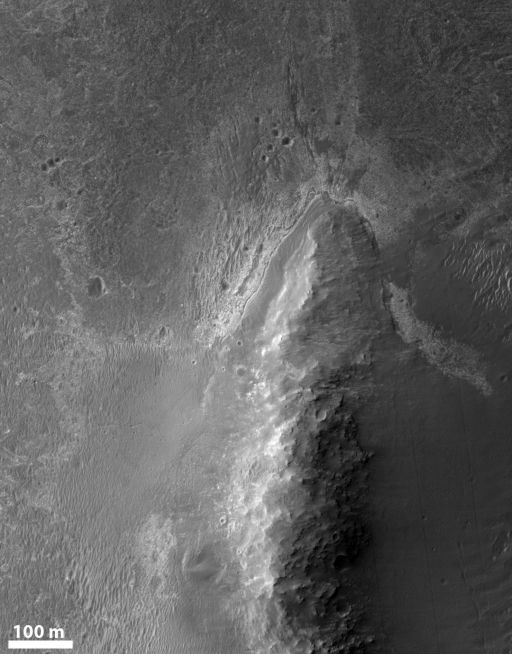 The eroded rim of Endeavour crater

A small segment of Mars Reconnaissance Orbiter HiRISE image covers the eroded rim of Endeavour crater, which pokes above the Meridiani plains. The Mars Exploration Rover Opportunity is on a long journey to reach this spot. NOTE: The scale bar is a guess assuming that the map-projected HiRISE image had a resolution of 25 centimeters per pixel; no geometry information was available for the photo. 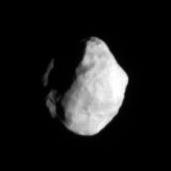 Cassini captured this view of Helene, the tiny moon that occupies the Lagrange point ahead of Dione in the same orbit, on November 24, 2008. Cassini was 68,000 kilometers from Helene when the photo was taken. Helene is about 36 by 32 by 30 kilometers in size.

Moving on out into spacecraft in deep space or otherwise cruising to their destinations...Dawn is coasting toward its February flyby of Mars. Deep Impact is done with its extrasolar planet observations and is cruising toward its 2010 flyby of comet 103P/Hartley 2. Hayabusa is hibernating as it contiues its return journey to Earth. The International Cometary Explorer is slowly being brought back to life, on course for a return visit to Earth in 2014.New Horizons is 12.8 AU from Earth and 19.8 AU from Pluto. There's been nothing new from Rosetta since the Steins flyby; there are two oral presentations on the mission in a Friday evening session at AGU, P54B (geez, who's going to be around for that?!). There's nothing new from Voyager 1 and 2. Last but not least, Ulysses appears to still be alive.