Monday afternoon saw an interesting series of talks about miniaturized spacecraft, some planned for the future, and one a retrospective from the past. 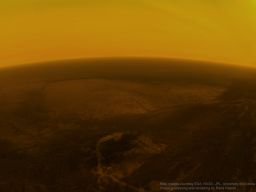 An artist's conception of Huygens' descent. At an altitude of 25 kilometers, Huygens' view of the surface became distinctly clearer than it had been at higher elevations. The altitude at which the atmosphere cleared was unexpectedly low. Only about 10 percent of the sunlight impinging on the upper atmosphere reaches to this depth. Saturn is nearly ten times farther from the Sun than Earth is, so the Sun's rays are barely more than 1% as strong to begin with. So solar power is not an option for a Titan probe.

Solar power is essentially useless on Titan, so can be ignored. The radioisotope thermoelectric generator (RTG) similar to that planned for the MSL Mars rover can provide around 120 Watts of energy at a mass of around 40 kilograms (90 pounds). The yet-to-be-flown Stirling generator can provide a little less, 110 Watts, for 30 kilograms (70 pounds) of mass. [Here and here are a couple of posts about modern RTGs and Stirlings. --ESL] And some small-scale thermoelectric generators yet to be fully developed can generate around 4 Watts for a few kilograms.

Batteries are great for short life. But they're heavy. Of Huygens' 320 kilograms (710 pounds), 60 kilograms (130 pounds) was batteries; in fact, nearly an entire "deck" of the Huygens design was dedicated to batteries and power management.

The problem is, an extensive payload like what one might want to take to Titan needs a lot of power. Lots of power has to come from lots of batteries or an RTG or Stirling power supply. That dramatically increases the mass of the lander. That means a bigger parachute, and perhaps some means of shock-absorption for landing (airbags, for example). Hence, adding instruments with power demands snowballs into making the entire spacecraft heavier. That said, Lebleu thinks that they could build a vehicle with similar ability to Huygens for about 100 kilograms (220 pounds) today, and, if it were dispatched from Titan orbit, perhaps as little as 65 kilograms (140 pounds). (This involves reducing the descent time, and integrating the antennae with the backshell of the entry capsule so as to throw away fewer parts on the way to the ground.) Power, however, remains the major constraint when designing for a Titan landing. With that in mind, Lebleu is pushing for Europe to invest in low-power, low-mass technologies useful not only at Titan, but also Mars.

Next up: a student project based on the rules of the Google Lunar X-Prize. Barend Buutfeld talked about the "Reach for the Moon" project from Delft University. They took two groups of ten students, and in ten weeks came up with a design for a mission which could deliver two small rovers to the surface of the moon. 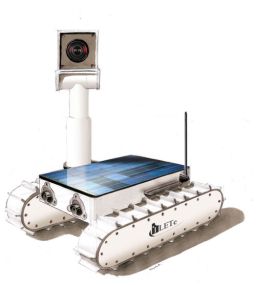 Reach for the Moon / Delft University of Technology

'Reach for the Moon' rover

Artist's impression of the student-designed rover proposed as a possible way to fit within the requirements of the Google Lunar X-Prize.

It's easy for students to draw boxes and rovers and tracks and landers and arm-wave about how to do it. But I have to give this team a lot of credit. Not only did Buutfeld stand up quite well to questions from the floor, but he also highlighted one significant problem. Go to Youtube, and search for 'The Moon.' The first five videos are not from the moon. Hopefully this team, or a team like it, will be able to put something together and achieve the goals of the Google Lunar X-Prize. One serious problem remains, however: money. Despite a prize fund of 20 to 30 million dollars, this team estimated the total cost to build this mission would be on the order of six times the value of the prize.

To close this entry, another randomly selected paper: "Origin of Titan and its atmosphere" (PDF format, 191k).