I'm posting my weekly update a bit early because I'm going on vacation this week. I was writing like crazy last week to have stuff ready for posting next week, so there will still be posts to read, but if you're wondering next week why I'm not commenting on whatever amazing news may come out of a space mission -- that's why! Also, there'll be no Ustream webcast next week. I'll return on the 27th with a special webcast cohosted by the Society's esteemed leader, Lou Friedman. So you have almost two weeks to think up difficult questions for him.

Moving right along to current events on active space missions: After that crazy flyby of Enceladus, Cassini's entering a relatively quiet period with few flybys. Saturn is approaching solar conjunction; for a one-week period beginning September 1, there will be little data returned (although if past years are any guide to the present, Cassini's radio science team will actually be using the the spacecraft's radio dish to probe the solar corona by broadcasting through it to Earth). Cassini will reach periapsis (its closest approach) of Rev 81, crossing to the sunlit side of the rings, on Tuesday; rev 81 ends at apoapsis on Friday. Cassini is on a really high-inclination orbit now, oriented nearly 75 degrees above the ring plane. (A polar orbit would have an inclination of 90 degrees, so it's really not far from polar.) We're still on roughly once-per-week orbits, and that's not going to change until late this year. Apart from the great Enceladus pictures, the team also released a nice crescent view of Janus last week.

On the surface of Mars, it is early winter in the southern hemisphere (Ls 114°). Today is sol 1,643 for Spirit, 1,622 for Opportunity, and 81 for Phoenix. In the absence of daily updates from the team, I usually rely on Mark Lemmon's website for the latest news on Phoenix operations, but his site seems to be down this weekend, too bad. At the rovers' landing sites, Mars Reconnaissance Orbiter's MARCI imager is still reporting water ice clouds, as well as the appearance of three large (but local) dust storms west of Elysium mons, all of which blew themselves out after a day. Opportunity is still driving up the slope of Duck Bay, heading out of Victoria crater. The Pancam team recently posted a gorgeous version of Opportunity's Cape Verde panorama. 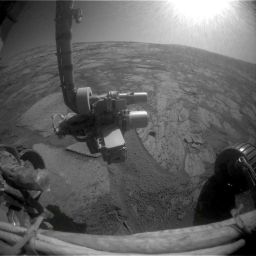 At the end of a drive on sol 1,621, Opportunity took this photo of its front wheels resting on the rocky slope of Duck Bay.

The MESSENGER team continues dribbling out captioned images from their crop of Science articles. This week's shows rupes. They are 51 days and 70 million kilometers from their second Mercury flyby.New Horizons is 10.2 AU from Earth and 20.8 AU from Pluto. I don't have any news on the activities of Chang'e 1, Kaguya, Venus Express, Voyager 1 and 2, Deep Impact, Stardust, or Dawn. Genesis is in hibernation, and Ulysses appears to still be alive.