The Phoenix team is lying somewhat low this week. With Phoenix' sols aligned almost perfectly with Arizona days, the team has to work through the local night, and at least two members of the JPL newsroom team have taken the week off. And an exhausted operations team is being given a much deserved two-day break centered on the Independence Day holiday. I managed to connect briefly with Sara Hammond, the press information officer at the University of Arizona, so I did get a few helpful answers to some of the more obvious questions I had to ask. To follow along, you should check out the SSI raw images page at Texas A&M, my robotic arm camera images page, and my sol-by-sol summary.

So, the last we checked, it was sol 30 on Phoenix, and they held a press conference on the results of the first wet chemistry lab analysis. So this entry will cover the events of sol 31 through 36. In a nutshell:

Composed of images taken from sols 0 to 32, this mosaic is one of the mission success requirements for the Phoenix lander. It is shown here at a quarter of its full resolution; for the full-size version, visit James Canvin's website. 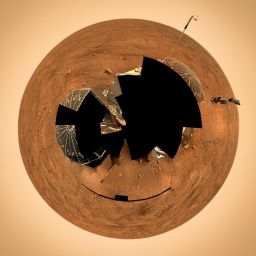 The mosaic is composed of four images taken at each of six spots. Because the images were taken at different times, shadows moved, which is why the shadows across the Wonderland trench (from the SSI camera mast) have color fringes. 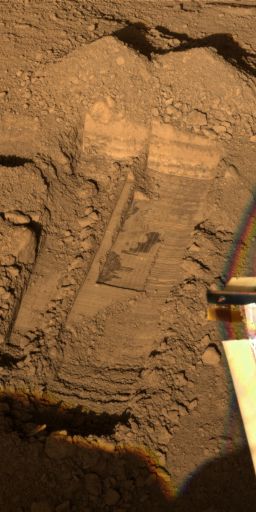 On sol 32, Phoenix used its robotic arm to scrape within the Snow White 2 trench. It used the scraping tool on the underside of its digging arm to smooth out the bottom of the trench, exposing the top of the ice table beneath the soil. (There is no bright ice visible in this image; the mission knows from the texture of the material they are scraping that it is the ice table.) The scraper on the underside of the scoop has several regularly spaced teeth, which carved regularly spaced straight lines into the bottom of the trench. 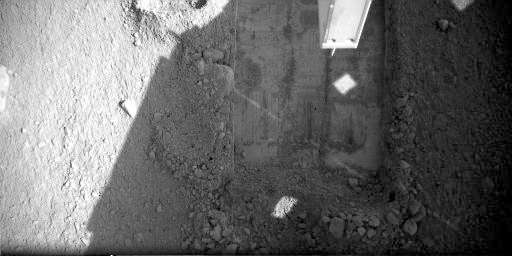 The Robotic Arm Camera captured this view of the trenches at Snow White on sol 32 at 12:10 local solar time, after scraping and grooming the soil-ice interface at the bottom of the trench.

The next sample delivered to NASA's Phoenix Mars Lander's Thermal and Evolved-Gas Analyzer (TEGA) will be ice-rich.

A team of engineers and scientists assembled to assess TEGA after a short circuit was discovered in the instrument has concluded that another short circuit could occur when the oven is used again.

"Since there is no way to assess the probability of another short circuit occurring, we are taking the most conservative approach and treating the next sample to TEGA as possibly our last," said Peter Smith, Phoenix's principal investigator.

A sample taken from the trench informally named "Snow White" that was in Phoenix's robotic arm's scoop earlier this week likely has dried out, so the soil particles are to be delivered to the lander's optical microscope on Thursday, and if material remains in the scoop, the rest will be deposited in the Wet Chemistry Laboratory, possibly early on Sunday....

Once the sample is delivered to the chemistry experiment, Smith said the highest priority will be obtaining the ice-rich sample and delivering it to TEGA's oven number zero.

In a few days, the Phoenix team will conduct tests so the instruments can deliver the icy sample quickly, so no materials sublimate, or change from a solid to a vapor, during the delivery process.

So Phoenix is not out of the woods yet -- until it gets that second, ice-rich sample in to TEGA, it has not met the defined criteria for minimum mission success. The team is now about to take a break, two sols off, during which the spacecraft will be busy taking images. And before you try to ask me why they should take any sols off when Phoenix' life is short, I'll answer that Phoenix may be a robot and able to work at all times around the clock, but its human team is human and by now, a month into the mission, working on Mars time, they must be both physically and mentally exhausted. Getting this TEGA sample right is of critical importance, and they're more likely to do it correctly if they all get just one weekend to recharge and come back to the problem with fresh minds.

Best of luck to the team and try, please, not to turn on your computers for at least 24 hours! You need the rest!