Or: "pHoenix!" (Sorry. MECA team leader Michael Hecht is responsible for that joke.)

There was a teleconference on the status of the Phoenix mission up to sol 30 today. (Like all of these media teleconferences, if you'd like to listen to it after the fact you can do so at JPL's Phoenix Media website.) Here's the news in a nutshell:

Today was all about the wet chemistry laboratory, which is half of the MECA instrument, which itself is one of the two instruments that are really unique to Phoenix (the other being TEGA). Nothing like the MECA wet chemistry analysis has ever been performed on Mars or, for that matter, any other place except Earth. Here's how MECA's wet chemistry laboratory -- which I'll abbreviate "WCL" for this post because I'll be saying it so often, but I'll try not to make a habit of it -- works.

First of all, here's a shot of MECA with the scoop poised over it on sol 30, just before the sample was delivered. 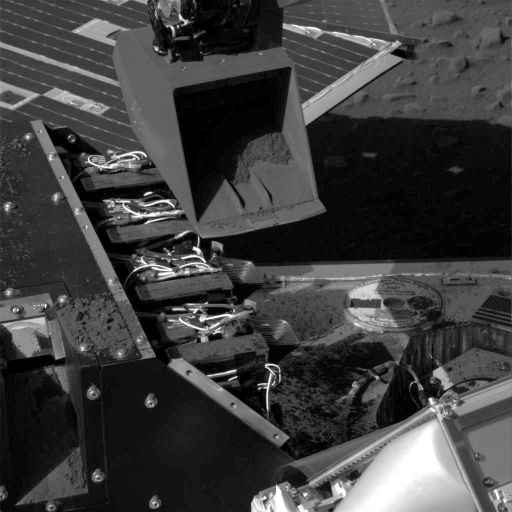 On sol 30 at 09:55:56 local time, Phoenix was ready to deliver a sample from the site called "Rosy Red" within Wonderland to the first of four wet chemistry laboratory cells in the MECA instrument. MECA is the box on the left; you can count the four WCL sample chambers marching up the right side of the box. On the right side of each of the WCL sample chambers is a funnel with a grille over it. There is a great deal of dirt visible on the deck of the lander, to the right of and below MECA, including on the Planetary Society-provided DVD. Nearly all of that dirt landed there as a result of the large scoopful of soil that was delivered to TEGA (the box at lower right of the image) on sol 12, and the subsequent shaking that was necessary to get any sample inside it. The soil did not fall from the scoop, so could not have contaminated the wet chemistry laboratory funnels. There is also a pile of dirt on the top of MECA; this is spillover from the two (to date) sample deliveries to the other part of MECA, the optical microscope, whose sample slides are rotated into position to receive samples through the slit within the notch on the left side of the MECA instrument. 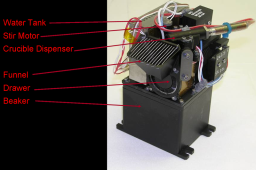 Two images captured by the robotic arm camera document the first delivery of a Martian soil sample into a MECA wet chemistry laboratory cell. The image taken at 12:29 shows the soil sitting in the funnel, which is covered by a grille whose wires are spaced 2 millimeters apart. At 12:35 the drawer underneath the hopper had closed, allowing a tiny amount of dark dirt to fall to the lander deck below. However, most of the sample remained stuck inside the funnel. Fortunately, plenty of sample did fall through the funnel into the waiting drawer of the wet chemistry laboratory cell. (For comparison, look at the next funnel, located at the top of the image; you can see right through it to the deck of the lander below.)

There's a stirring stick in the beaker, so they stir it up to help stuff in the sample dissolve into the water. Spaced around the beaker are many sensors. From an abstract I found describing the instrument, here's a description of the sensors that are included:

All clear? MECA team member Sam Kounaves reported that they completed about 80% of the analysis on the first cell. "It's been difficult and slow but it performed flawlessly yesterday," he said, which must have been a huge relief to the team. He went on to say that the team's biggest surprise was the pH being alkaline, with a pH of 8 or 9, rather than acid. (A pH of 7 is neutral.) He said they've also successfully measured magnesium, sodium, potassium, and chloride, though he wasn't yet prepared to give abundances; and he said they haven't finished the sulfate analysis yet, that that'll take another couple of days. He said they can't make a definitive statement about nitrogen yet. He said they "don't see extremely high salt," and that "calcium appears to be extremely low and the chloride appears to be low also. We have to wait for the rest of the analysis to see where the other anions are. There were reasonable levels of salt," hundreds to thousands of parts per million.

Clearly the reporters on the teleconference didn't quite know what to make of this news. The news does have bearing on that key question for the Phoenix mission, the habitability of the Martian environment. The fact that the soil sample wasn't strongly acidic or incredibly salty is good news for habitability. Strictly considering the chemical species that the wet chemistry lab was able to measure so far, it wouldn't be a terrible substrate to try growing some alkaline-happy Earth plants (such as asparagus or turnips or green beans) in. However, MECA can say nothing about whether there are any organics present in the soil -- that's TEGA's job. And MECA's analysis has limited sensitivity; there are a lot of trace elements it's incapable of measuring. But, within its limitations, the news is good for habitability.

In fact, Kounaves said, this looks a lot like soil you find near the surface at one of the locations commonly studied as an analogue to Mars: the Dry Valleys of Antarctica. He said that soil is also alkaline. However, he said, if you dig down 30 centimeters, to the ice table, you can find that the ice-soil interface somehow acts to concentrate a lot of the chemicals that MECA is searching for; he said that at the ice table you can switch to acid soils, and go from near-surface salinities of hundreds of parts per million to sub-surface salinity that's much closer to ocean water, 15, 20, even 30 thousand parts per million. (Again, surface seawater is around 35 thousand.) So it'll be really interesting to see what subsequent samples reveal.

On to the TEGA saga. A press release yesterday mentioned a new problem that was discovered after a sample was finally shaken into oven #4: "Four days of vibration eventually succeeded at getting the soil through the screen. However, engineers believe the use of a motor to create the vibration may also have caused a short circuit in wiring near that oven. Concern about triggering other short circuits has prompted the Phoenix team to be cautious about the use of other TEGA cells." Today, Barry Goldstein clarified this. He said that the short is confined to oven #4, which they're now done with; so the short has no direct effect on the other cells. It's just that the fact that it happened will make them more cautious about doing so much shaking in the future.

It's very, very, very good news from the TEGA team that, despite all the problems, they've successfully completed the analysis of the first sample: Bill Boynton said today that "the scientific data coming out of the instrument is just spectacular; the instrument is working very well in that regard." I think the team deserves congratulations for that. Apparently, reducing the data that they've received from this first analysis will take them weeks. What they can say so far is that the sample was pretty dry (no surprise, since it was from the surface and was hanging out in the sun and air over the TEGA oven for days until it got inside), but that there were small amounts of carbon dioxide and water vapor released during the highest-temperature heating cycle, which means those gases are bound up in the minerals in the rocks. He could say with some certainty that the soil had definitely interacted with water at some time in the past. What he can't say yet is whether that interaction happened at its current location or whether it happened elsewhere on Mars, and what they're looking at is soil that was blown in from elsewhere.

Two images were taken of the TEGA instrument on sol 25, before and after an attempt to open the doors of oven number 5, adjacent to oven number 4, which had been opened previously and used for the first sample. The left-hand door of oven 4 never opened properly. It now appears that neither door on oven 5 has opened properly. The doors are not motorized; they are connected to springs and latches, and should spring open completely when the latch is released. There is no mechanism within TEGA to attempt to push the doors open any further. The springs on the doors are strong enough to push the doors open even when buried under a few centimeters of soil; you can see that the left-hand door has successfully thrown off nearly all the soil that covered it. So it is unclear what is preventing the doors from opening.

One of the cool things they mentioned today is that they've developed a new skill: they can now take one sample with the robotic arm and, by careful sprinkling, deliver material taken from one spot to all three of the analysis instruments -- TEGA, the MECA WCL, and the MECA microscope. That's not something they flew to Mars knowing how to do; the plans were always just to scoop and dump onto one instrument, then go get another scoop and dump onto the next instrument. But they had to develop the sprinkle technique to make TEGA work, and that's had the positive payoff that now they can analyze the same sample three different ways, so they know that what they measure in the WCL and TEGA is material that looks the same as what they're seeing in the microscope. Every cloud has a silver lining!

Finally, here's a neat view of that pesky, clumpy Mars soil, taken with the robotic arm camera, focused on a tiny fraction of the width of the tip of the scoop. This image has a resolution of 30 microns per pixel -- that is, 33 pixels make a millimeter! I didn't realize the robotic arm camera had this capability. It's like there's two different microscopes on Phoenix, one with low power magnification and one with high power. And there's still the Atomic Force Microscope to come (which I'm afraid I have not heard mentioned once in one of these telecons). 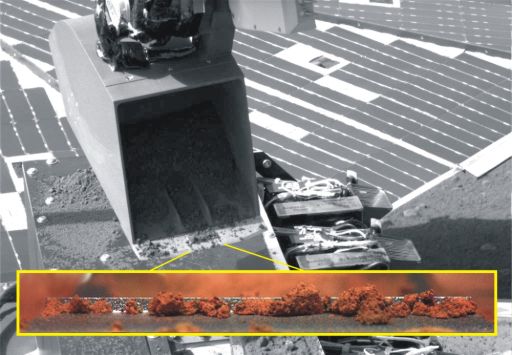 After scooping a sample of soil from the location called "Rosy Red" on sol 26, Phoenix rotated the tip of its scoop to within 11 millimeters of its robotic arm camera, which took a series of photos of the soil under the light of red, green, and blue LEDs to build up this picture of the fluffy, clumpy, red soil found at the Phoenix landing site. The actual image has a resolution of 30 microns per pixel; this version has been enlarged somewhat. The width of the metal tab in the robotic arm camera image is 15 millimeters.