I've spent the last few days with a group of my colleagues on the science team for two of the lesser-known instruments on the Mars Reconnaissance Orbiter (MRO) spacecraft. The instruments are the MArs Color Imager (MARCI) and the ConTeXt camera (CTX), and they were both built and are both operated by Malin Space Science Systems, Inc. in San Diego, under the direction of Principal Investigator and science team leader Mike Malin. The team met in rain-soaked Milwaukee, at the Space Science Institute office of science team member and atmospheric science maven Mike Wolff.MARCI (pronounced like the woman's name "Marcie") is a super-wide-angle, fish-eye lens camera that gives us a limb-to-limb view of Mars from MRO's low polar orbit. MARCI is what is known as a "push-frame" camera, because it has color filters bonded directly onto its CCD detector, and we build up color images by "pushing" the 1024 pixel wide field of view of the camera across the surface as the spacecraft orbits around the planet. During each orbit, MARCI acquires a single extremely long image, typically more the 50,000 pixels long, using a combination of one to seven color filters that we can select, depending on the science goals. Most of the time we use all seven filters, which cover wavelengths from the far-UV (260 nm) to the short-wave near-IR (720 nm). The filters were selected to provide us with the ability to monitor and map ozone as well as ice and dust clouds in the Martian atmosphere, to search for changes in the planet's bright and dark surface markings, and to provide a small amount of information about iron-bearing minerals on the planet's surface.

Each long MARCI image covers about 60 degrees of longitude on Mars, and during each orbit of MRO the longitude coverage shifts by about 30 degrees as Mars rotates under the spacecraft. Thus, it typically takes about 12 orbits of the spacecraft for MARCI to see all of the planet (except, of course, the parts of whichever polar region might be in polar night...). Twelve MRO orbits span approximately a Martian day or "sol", and so MARCI has been providing daily ("solly" has never caught on) global maps since MRO got into orbit around Mars in November 2006. These maps provide a sort of "weather satellite" view of the planet, with a best resolution of around 1 km/pixel, and have given us an amazing first-hand view of Martian weather patterns for almost a full Mars year. MARCI has taken over for a similar, previous instrument called the Mars Orbiter Camera Wide Angle (MOC/WA) that was on the Mars Global Surveyor (MGS) spacecraft, and so MARCI's record of daily color coverage of Mars expands on the nearly 5 Mars year record of MOC/WA. 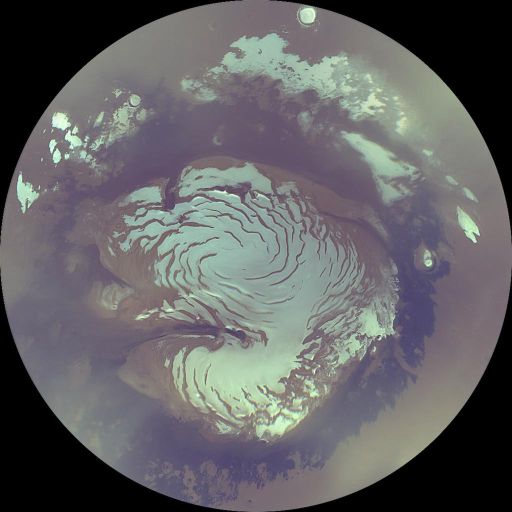 Throughout the week of testing Sept. 29 - Oct. 6, 2006, the Mars Color Imager (MARCI) acquired terminator (transition between nighttime and daytime) to terminator swaths of color images on every dayside orbit, as the spacecraft moved northward in its orbit. The south polar region was deep in winter shadow, but the north polar region was illuminated the entire Martian day. This image is a composite mosaic of 4 polar views of Mars, taken at midnight, 6 a.m., noon, and 6 p.m. local Martian time. This is possible because during summer the Sun is always shining in the polar region. The image shows the mostly water-ice perennial cap (white area), sitting atop the north polar layered materials (light tan immediately adjacent to the ice), and the dark circumpolar dunes. This view shows the region poleward of about 72 degrees north latitude. The data were acquired at about 900 meters (about 3,000 feet) per pixel.

The CTX camera (which we just pronounce as the letters C, T, and X) is very different from MARCI because it's a high-resolution, black and white camera designed to study the geology of the surface up close. CTX has a resolution of about 6 m/pixel, which is not as high as that of the MGS MOC's Narrow Angle camera (1.5 m/pixel) or the MRO's highest-resolution camera, the High Resolution Imaging Science Experiment (HiRISE) at 25 cm/pixel, but it covers much larger pieces of ground than those cameras at an excellent resolution for understanding the geologic context (hence the name) of those higher-resolution photos. Indeed, while MOC only covered around 5 percent of Mars at 1.5 m/pixel resolution and HiRISE has only covered much less than 1 percent of the surface so far at 25 cm/pixel, CTX has already covered around 30 percent of Mars at 6 m/pixel during MRO's Primary Science Phase of the mission. If CTX and MRO can continue to operate this successfully during an extended mission period, we may be able to completely image the planet at this unprecedented scale. Because of their broad coverage, CTX images are already becoming the data set of choice for many geology studies (including searching for the best landing sites for the Mars Science Laboratory rover to be launched next year), enhancing the outstanding previous near-global coverage of the Mars Odyssey orbiter's THEMIS cameras at resolutions from about 20 m/pixel to 100 m/pixel. 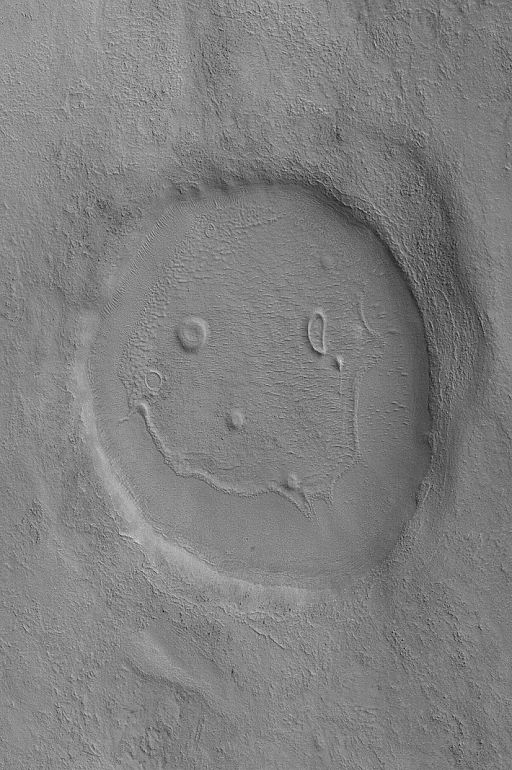 This picture of a crater resembling a "happy face" was acquired by the Context Camera (CTX) on Mars Reconnaissance Orbiter on January 28, 2008. The unnamed crater is about 3 kilometers (1.9 miles) across. It is located among the Nereidum Montes, north of the Argyre basin, near 45.1°S, 55.0°W. North is toward the right and sunlight illuminates the scene from the upper right.