So the science team had a full sol's worth of plans prepared for Phoenix's 10th full Martian day of operations, but unfortunately the commands didn't get delivered to Phoenix in time to run on sol 10 because Odyssey went into safe mode. So Phoenix had another "runout" day, similar to the 2nd sol, in which it operated a backup list of commands stored on board for just such a contingency. That meant no arm motions, but instead it acquired some more frames for a full-color panorama. I think only about half of those frames came down during the afternoon downlink yesterday. Here's what they look like when merged with the sol 2 runout images. The sol 10 stuff is on the right, sol 2 on the left; they've been merged into a single panorama by James Canvin with the proper amount of space between them. 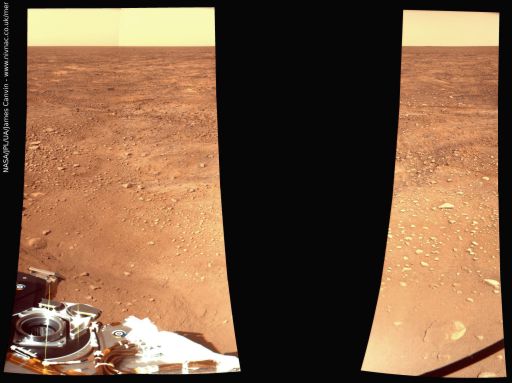 As of sol 10, two "runout" days (when Phoenix received no commands from orbiters) had produced three columns of an eventual 360-degree color panorama of its landing site. The view is to the north of the lander; on the left, the area photographed on sol 2, it includes an area close to the lander where the robotic arm can dump soil, and on the right, photographed on sol 10, it includes the area called "Humpty Dumpty" and the rock called "King's Men."

Today's phone briefing contained a lot more interesting information on images taken on sol 9 by the optical microscope, images being billed in today's press release as the highest resolution ever returned from Mars, which they are, by a factor of 10. Some of the soil grains in the image below are too small to be seen with the naked eye. Explore the images a little bit, then I'll explain what we're looking at. 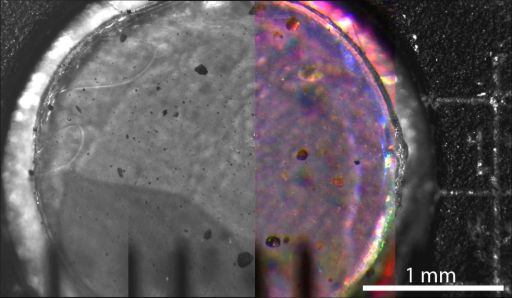 A mosaic of the first four individual Optical Microscope observations on Phoenix includes what appear to be grains of Martian soil of a wide variety of shapes and colors. The Optical Microscope "slide" consists of a sticky silicone disk about 3 millimeters in diameter. This disk was exposed when Phoenix landed; the dust grains seen here are presumed to be soil grains kicked up during the rocket-assisted landing. One of the four panels was captured in color, using light-emitting diodes (LEDs) of different colors to illuminate the target. One of the grains in the color section is translucent. It cannot be ice, as ice would have sublimed in the eight days between landing and the time that the optical microscope was used to observe the sample. 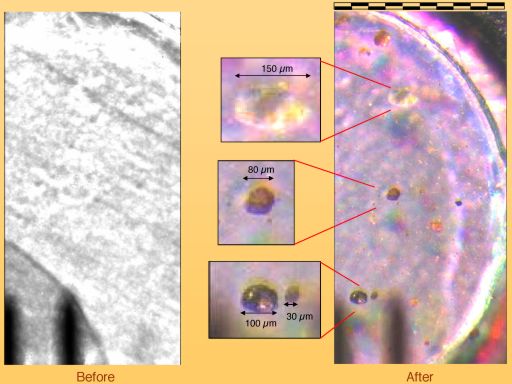 A comparison of images taken of an exposed optical microscope slide taken during the cruise to Mars (left) and after landing (right) strongly indicates that the grains on the slide were kicked up by Phoenix' landing and thus came from Mars. Those grains show a surprising diversity of color, from apparently translucent (perhaps salt, but not ice) to typically Mars-colored materials. The scale bar at top is one millimeter long, divided into 100-micrometer bars. 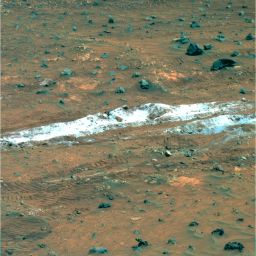 In the Silica Valley

Spirit shot this false color image looking toward Silica Valley on Sol 1213 (June 2, 2007)with its Pancam. The false color enhances some of the silica-rich soils the rover has been studying in the little Valley between Home Plate and Mitcheltree Ridge.

Another possibility for translucent and white that's probably on everybody's minds is ice. But it's not likely to be ice, either. The grains we are looking at here are stuck to a silicone sample catcher that was exposed to the air when Phoenix landed, nine days before the photo was taken. If there were any tiny ice grains kicked up during landing that adhered to this plate, the tiny things should have sublimed into the air (meaning they should turn directly from solid into gas) in the nine intervening days. The same is not true of the possible ice that's exposed at Holy Cow; it may be subliming, but it's a big area that presumably continues to depth, so even if we've lost half a millimeter of ice at Holy Cow its appearance shouldn't have changed too much in nine days. But if you lose half a millimeter of a quarter-millimeter grain, the grain is gone. So ice is out.

That leaves a whitish salt mineral as the most likely possibility. And that, in turn, increases the likelihood that the smattering of whitish stuff we are seeing in the first dig site is salt, not ice. But it could still be ice! Only time will tell.

Later in the mission, if they do contact ice, they should be able to deliver a scoopful of ice-rich material to the optical microscope and get a microscopic image of it before it sublimes. This observation was unique, being delayed by more than a week between the time the sample was "acquired" and the time that it was photographed. But there's not really a lot to be learned from microscopy of scraped up ice. The microscope is more to look at mineral grains. Michael Hecht, the scientist on the panel representing the microscope instrument, pointed out that the microscope is the only instrument that is able to look at individual components of soil separately. For TEGA and the wet chemistry lab, a scoopful of soil gets dumped in, which may contain ice, dust, mineral grains, salts, everything. The microscope likewise gets a mixed sample, but it can be used to examine the components individually.

Finally, I want to mention that I've been very remiss in not linking to A. J. S. Rayl's daily reports on Phoenix. Her report from yesterday can be found here; check out the Phoenix news archive for past reports.

One thing I didn't mention yesterday, I held back because I thought Rayl was going to -- but she didn't. She asked, in the press briefing, what the difference was between the Mars Exploration Rover and Phoenix robotic arms. Ashitey Trebi-Ollenu of the JPL robotics lab went through a fascinating laundry list of similarities and differences. He said that the rovers' robotic arm was the size of his own, so it was fairly easy to maneuver; Phoenix' arm is "more like a fishing rod." He also said that on Phoenix' arm, there are no contact switches. The rover arm "knows" when it has contacted soil or a rock because there is a switch that indicates when it is pressing in to something. On Phoenix' arm, the only way of knowing that contact has been made is by detecting the amount of torque on the joints. The arm is designed for digging, not for in-situ work as the rovers' arm is. Phoenix' arm has four degrees of freedom, where the rovers' arms have five (though I guess Opportunity is now down to four). Both arms use the same actuators; both are driven with very similar software; the way they are sequenced and operated is very much the same. But the environment, and the activities they are being asked to do, are very differnt.