So, now we just have to wait and watch. I'm sitting in the press room at the Jet Propulsion Laboratory, where there's space for roughly 30 press to work; these are mostly the "print" people, as the TV folks are set up in the tent outside that houses the Phoenix model. I put "print" in quotes because, as far as I can tell, nearly everybody here, associated with a print publication or not, is blogging. I doubt I could write anything that any of the flying fingers in here have not written about already.

The feed has started on the press channel of NASA TV for the landing. This one is non-commentated so it's mostly silent except when there's chatter over the comm. There's a lot of chatter in the press room right now also so it's hard for me to hear the comm and tell what's going on; I'm hopeful that some of the more experienced (and more crochety) people in here will speak up and tell people to be quiet as things heat up.

An old friend popped in the press room just a few minutes ago -- Steve Squyres, principal investigator on the rover missions. He was unusually dressy in a sport coat, because he's going to be spending the evening in the tent outside, doing commentary for the television media. He mentioned they've been doing a lot of work in the testbed with the engineering model, figuring out if it's safe to drive Opportunity with its arm sticking out. He said that they've driven it up and over bricks, slamming the front end to the ground (and he mimed the arm jiggling up and down alarmingly) and the thing hasn't even moved off its calibrated position. So, he said, it's safe to drive, and they're very likely planning on proceeding toward Cape Verde later this week; they'll hold a decision about it on Wednesday. You'll be able to read all about it on Thursday or Friday when A. J. S. Rayl (who's sitting right in front of me as I write) posts her latest rover update.

Is everybody ready? I am. I'm a little nervous, but more excited. Here's a photo of me sitting in the press room, with my trusty HD-resolution monitor, and my Webcam attached to my laptop. Also note the temporary Phoenix tattoo, which Peter Smith gave me, and which I'm glad to wear in solidarity with the Phoenix team! I'll write again when there is news. 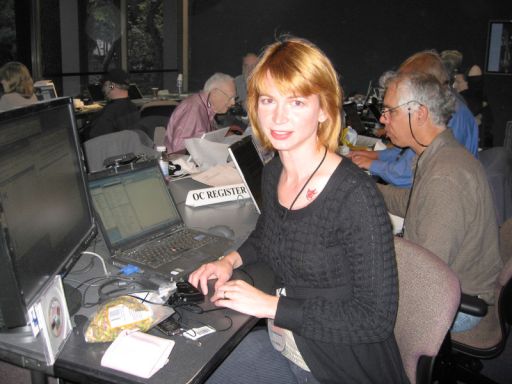 In the Phoenix landing press room

I'm in my spot, aiting for news of Phoenix' approaching landing on Mars, sporting the temporary Phoenix tattoo given to me by Peter Smith.