It's not really news, but it's news: the letter from NASA has finally arrived at the Jet Propulsion Laboratory, informing them that NASA will pay the bills to keep Cassini running for another two years. The bill is $80 million per year for the next two years to keep the flagship operating. Now, some of you might reasonably wonder why it costs that much money when no further hardware needs to be built, no more launches have to be bought, and so on. But even though, like all long-lived missions, Cassini has streamlined its operations over time, it still takes a small army of people to keep the mission running.

There are engineers who monitor its health and navigators and mission planners who plan its course. There are programmers who are constantly working to improve the efficiency of its operating systems and to develop workarounds for the inevitable problems that strike an aging spacecraft. There's the communications people, both at JPL and at the Deep Space Network, who figure out when and how all the precious bits of data will arrive on Earth from Saturn -- and who solve problems when spacecraft or weather glitches cause data to be lost. There are the data systems people, who review and process and manage and archive and distribute all those precious bits of data to the science team. And then there's the science team -- literally hundreds of scientists, and all of their students (undergrad, grad, and postdocs), distributed across the world; in fact, if I remember correctly, there's about as many Cassini science team members in Europe as there are in the United States. Finally, there's an absolutely necessary contingent of managers and administrators who make sure all these different groups are talking to each other. Meanwhile, Cassini is in constant motion, swinging around Saturn in repeated, ever-tighter loops. As I write this, a quick look at CASSIE tells me that Cassini is currently flying pretty far from Saturn, and a look at my tour page tells me it's very close to apoapsis, getting ready to turn around and plunge back toward the planet.

And speaking of the people on the Cassini mission, I want to take a moment to congratulate Bob Pappalardo, who will be taking command of the Cassini science ship as the new Project Scientist when the extended mission starts on July 1. In recent years Bob has become a real leader among the outer planets science community, tirelessly advocating for a new flagship mission to be started to explore Europa. I'm excited to see him offered this opportunity to run such an important mission.

John Spencer wrote more than a year ago in this space about what is planned for the extended mission: multiple Titan flybys (of course), some very exciting science studying the rings and atmosphere surrounding Saturn's equinox on August 11, 2009, and seven more close flybys of Enceladus. I have a couple of neat graphics from David Seal describing the two-year extension: a "petal plot" showing the path of Cassini (in green) and a suitable-for-Powerpoint slide illustrating the close encounters planned in both the prime and extended missions. And, of course, the whole tour is described in detail on my tour page. 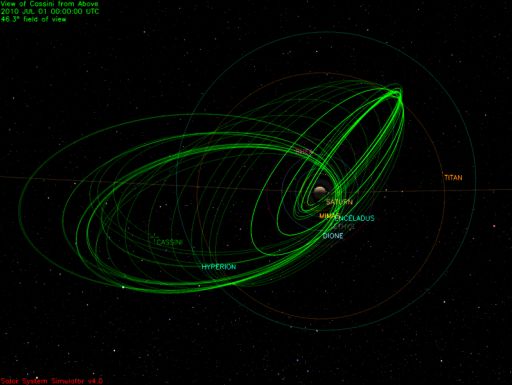 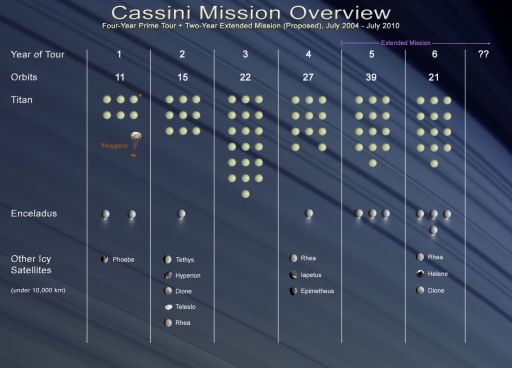 Overview of the Cassini prime and extended missions