Today I got sidetracked from other projects by some amazing photos of Phobos released by the Mars Reconnaissance Orbiter HiRISE team. The images were captured in three filters, so they produced beautifully colored views of this moon. For reasons I don't understand, the HiRISE photo was originally released with north down; I rotated it by 180 degrees so that north is up. The grooves you can see here are roughly parallel to Phobos' equator. 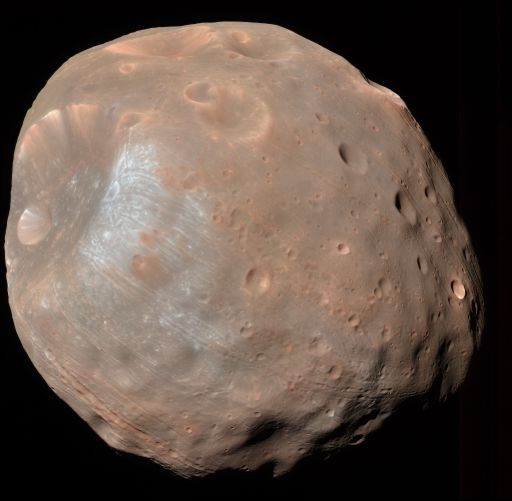 Mars Reconnaissance Orbiter approached to within 6,800 kilometers (4,200 miles) of Phobos to capture this enhanced-color view of the Martian moon on March 23, 2008. The color is from infrared, red, and blue-green channels on the camera, so it represents light shifted slightly longer in wavelength than human eues can see, which emphasizes subtle colorations on the moon. The color view shows that the material surrounding the giant crater Stickney (on the left side of the moon) appears gray while the rest of the moon appears reddish. The grayer material is likely fresher material. From this vantage point Phobos appears about 21 kilometers (13 miles) in diameter. (The irregularly-shaped moon has a minimum diameter of about 19 kilometers and a maxiumum diameter of about 27 kilometers.) The image has been rotated by 180 degrees from the original release so that north is approximately up.
Share this story!Send to a friend - Slashdot - Digg - Reddit
Del.icio.us - Newsvine - NowPublic 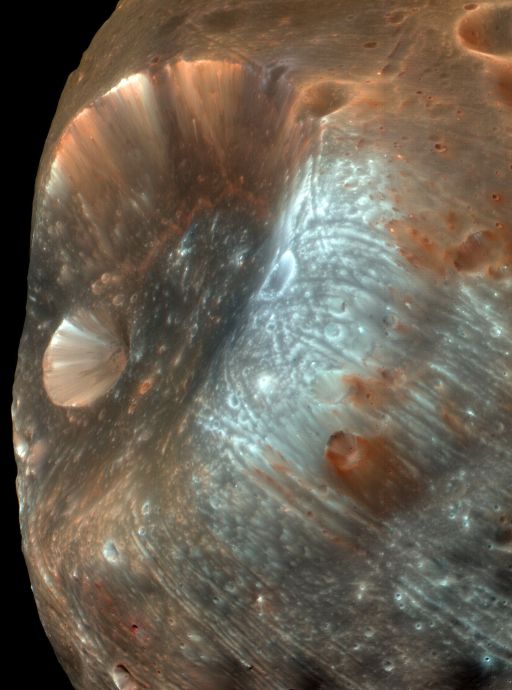 This version of a color image of Phobos taken by Mars Reconnaissance Orbiter has been stretched to exaggerate color variations within and around the nine-kilometer-diameter crater Stickney on Phobos. The floor of Stickney appears dark, while cascades of vari-colored material slide down its walls, revealing that the moon is bright on the inside. Also bright is the bluish spray of ejecta to the east(right) of Stickney. Here and there, sharp-shadowed boulders and sharp-edged, bright sprays of fresh craters dot the landscape, while Phobos' enigmatic grooves appear worn and eroded. This version of the image has been rotated 180 degrees from the original release so that north is approximately up. 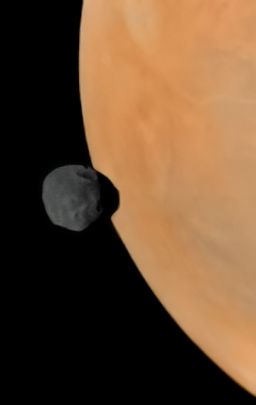 Since I'm talking about Phobos' grooves, I should mention a neat paper presented at the 2006 Lunar and Planetary Science conference by John Murray and coauthors (you can download the abstract in PDF format here). It has long been assumed that the bizarre terrain of sub-parallel grooves that crosses much of Phobos' surface owes its existence to the giant crater Stickney. You can see why people would think that if you look at the image above; the grooves seem to issue outward from Stickney.

However, as the paper says, this correlation was made based on Viking data, which included very poor imaging of the center of the leading hemisphere of Phobos, just to the west of Stickney (and just beyond the limb in this image). The latest images from Mars Express have effectively ruled out a relationship between Stickney and the grooves because many grooves are in fact tangential to Stickney on its west side, not radial as you would expect if they were chains of secondary craters from the Stickney impact. Furthermore, their mapping shows that the grooves "can be grouped into at least 12 families of different ages," which also rules out the possibility that they all happened at the same time as a result of the Stickney impact.

Instead, Murray and coworkers present a different idea: that the grooves are secondary craters, but not from the Stickney impact; instead, they were made by ejecta from impacts that happened on Mars. Mars gets hit, stuff gets blasted into space, and Phobos, orbiting Mars quickly and closely about its equator, runs in to the streams of flying rocks, effectively splattering its windshield with chains of craters. The Murray paper includes a map of the grooves that shows they have the pattern you would expect from such an origin -- they are oriented every which way at the center of the leading hemisphere, but they all organize themselves parallel to Phobos' direction of motion as you go to longitudes 90 degrees away from the leading hemisphere, and then they disappear at the center of the trailing hemisphere, which is effectively in Phobos' shadow. Cooooool. 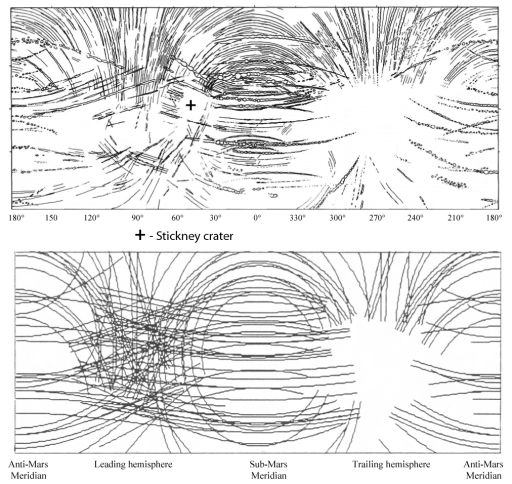 John Murray and the HRSC team

The upper panel shows a map of Phobos' grooves based upon Mars Express HRSC, Mars Global Surveyor MOC, and Viking images of the moon. The lower image is a computer model of the expected orientations of secondary crater chains from impacts on Mars. The two maps show a surprising amount of agreement, indicating that the model is a good fit to reality.