At last I'm at home, sans baby, so I have some time to go through my notes from Monday's morning and afternoon presentations on the MESSENGER flyby of Mercury from the Lunar and Planetary Science Conference. I hope it will have been worth the wait!

The next talk was by David Smith on observations of the pull of gravity that MESSENGER felt from Mercury as it flew by. Gravity is one of the few measurements a mission can perform that directly measures the interior of a planet. To study gravity, radio scientists look at the Doppler tracking of MESSENGER's radio transmissions throughout the flyby and compare it to models for the interior structure of Mercury. When the speed of MESSENGER deviates slightly from what is expected, radio scientists can infer that there's something not correct about their model, and they modify their model to make it match the data. To make a long story short, the actual gravity data differed from the model by quite a lot, which had Smith and his coworkers scratching their heads for a while: "Initially, we thought there was something wrong with the data, something wrong with the position of Mercury, or something wrong with the model of the spacecraft, but none of those seemed to explain this. It was after about two weeks of trying to find some physical explanation that we thought, 'this must be gravity,' so we tried solving for a gravity anomaly under the spacecraft at the point of closest approach." That is, they inferred there was some excess mass buried invisibly under Mercury's crust near MESSENGER's path. Smith showed that they were able to account for about 95% of the problem deviation using a single mass anomaly positioned about 10 degrees south of the equator at about 60 degrees longitude. There's no real conclusions about the interior structure of Mercury that you can draw from this one flyby -- much more data is needed -- except that it seems the radio scientists are going to have to consider mass anomalies to be important to understanding Mercury's gravity field, and not just assume its interior is pretty homogeneous. So, there's hard work (but presumably fun work) ahead for them.

The next talk was by Maria Zuber on the one topographic profile from the laser altimeter. As I mentioned earlier, the most important result from her talk is that because of the excellent performance of their instrument, they will be able to map a much larger area of Mercury than they originally proposed to do. They'll be able to map into the north polar regions by pointing the instrument away from straight down (off-nadir), and map a little way into the southern hemisphere because the instrument works well at greater distances than expected.

The next talk was by Louise Prockter on a preview of the imaging results on areas not seen by Mariner 10. There would be more interpretation of these areas in later talks; Louise just walked through some of the most interesting spots. One example is a few craters that contain strange deposits of bright material at their centers, like this one, located in a midlatitude region near the terminator in the departing wide-angle shot. I'm showing the whole crater in a low-res view cropped from a wide-angle shot, and then half of the crater (all that was available) from a higher-resolution view. 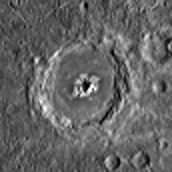 Some of the craters first seen by MESSENGER on Mercury contain unusually bright interior deposits, like this one cropped from a wide-angle view captured shortly after closest approach. 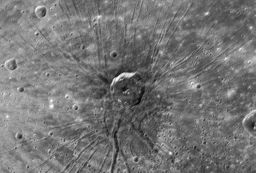 Almost at the center of the gigantic Caloris basin on Mercury is this 40-kilometer (25-mile) impact crater, witting on top of a radiating spray of troughs. Are the troughs related to the crater? Or did the crater happen to form by a "bull's-eye" impact on the center of these radia fratures?

Next up was Thomas Watters, giving the first geological interpretation of some of the more prominent tectonic features on Mercury. I took lots of notes on his talk, so I'll let him speak for himself, as far as my ability to type as fast as he spoke goes. (I apologize for any mistakes made in transcription.) "We knew from Mariner 10 that there were a large number of tectonic features. These include lobate scarps, wrinkle ridges, and high-relief ridges. All expressed crustal shortening and are expressions of either thrust faults or some combination of thrusting and folding. They are found from most ancient inter-crater plains to the youngest smooth plains. We also knew that the imaged portion of the floor of Caloris was highly deformed, not only by wrinkle ridges but also by giant graben. Graben actually crosscut wrinkle ridges and appear to be the youngest tectonic features on the floor of Caloris." I'll note that graben is a term referring to a valley that opens up as a result of rifting, that is, extensional tectonics. The East African Rift Valley has many graben. The Conneticut Valley is also a graben, as anyone who has taken an introductory geology class in New England can tell you! 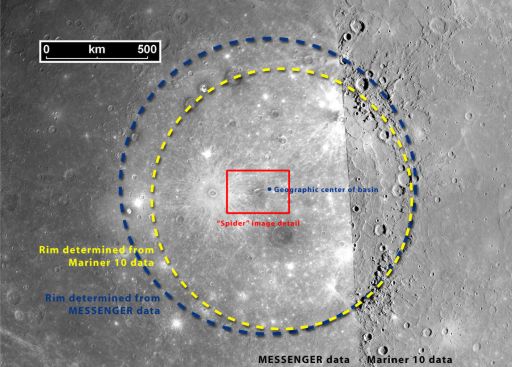 During its first flyby of Mercury MESSENGER finally got a look at the western half of the Caloris basin, a giant impact structure only partially revealed by Mariner 10. Tectonic features are easy to spot under the low lighting conditions of the Mariner 10-imaged part, but they are harder to see in the MESSENGER area. 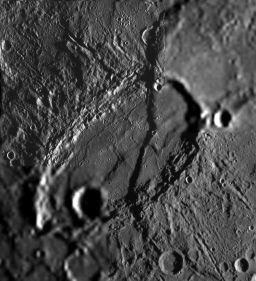 During its first flyby of Mercury, MESSENGER observed many prominent lobate scarps, or "rupes." One of hte most prominent is now informally named Beagle Rupes, part of which is shown here. It is unusual not only for its extreme length (more than 600 kilometers) and curvature, but also because it cuts an extremely elliptical crater. This image is a mosaic of two of the highest-resolution images from MESSENGER's encounter (EN0108826105M and EN0108826206M) overlaid on a much lower-resolution wide-angle shot from later in the encounter.

"Another thing we didn't see much of in Mariner 10 was small craters being cut by rupes. But there is new evidence of prominent scarps cutting the floors of smaller-diameter impact craters.
e have also found high-relief ridges in the MESSENGER hemisphere. One is over 600 kilometers long. We also have seen that high-relief ridges can transition into lobate scarps. This one" (he's referring to an illustration I don't have for you) "does that. If you combine the length of those two structures, the total is over 1,000 kilometers. This makes it easily largest and longest tectonic feature we have seen on Mercury.

"We are also finding previously undetected tectonic features in the Mariner 10 hemisphere. One is a 270-kilometer-long lobate scarp in the Mariner 10 hemisphere that I completely missed. They were near sub-solar longitude, so we just didn't see it. I am no longer convinced that my eagle eyes were able to pick out features in areas where we had poor lighting conditions. [Some chuckling from the audience here.]

"There are some dominant trends both in spatial distribution and orientations. Most of the large-scale lobate scarps occur in the southern hemisphere. This is something we had seen in Mariner 10 data, but it holds true for the MESSENGER hemisphere as well. We are also getting a new picture of the timing. We are seeing embayment of lobate scarps by smooth plains material. We are also seeing evidence of large impact craters superimposed on lobate scarps. This we did not see in the Mariner 10 hemisphere. One scarp obliterated by a largish impact crater is overthrusting a 10-kilometer crater. We are seeing no evidence of embayment of lobate scarps by inter-crater plains material. Faulting appears to have initiated after the emplacement of the inter-crater plains, but continued after emplacement of youngest smooth plains."

Phew! I think that's enough MESSENGER results for today. Just for fun, I'll close with the cheat map I made for myself to help me figure out what images are available for illustrating these stories. As you can see, the team has so far focused on releasing terminator images from the inbound (crescent) view, where MESSENGER got a much better look at the topography of Mercury than Mariner 10 did. On the outbound (gibbous) hemisphere, they've released mostly images from the area that Mariner 10 did not see, and more of the pictures are closer to the terminator where the angle of the sun makes it easier to see topography. 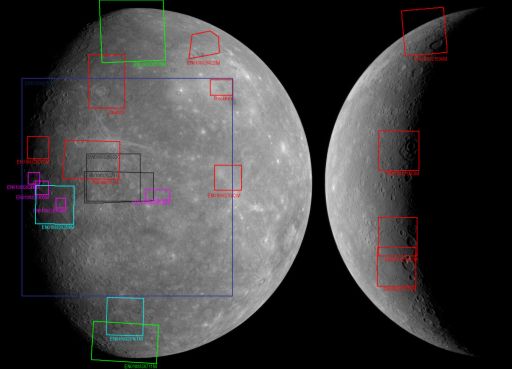