Just after the MESSENGER flyby of Mercury a reader asked me an interesting question: do MESSENGER's navigators have to take relativistic effects into account when they plan MESSENGER's trajectory? Relativistic effects are important for understanding the orbit of Mercury; in fact, predicting the precession of Mercury's orbit was one of the tests of Einstein's theory of general relativity that proved it performed better at explaining the solar system than Newton's theory did. However, the relativistic effects are pretty small; they cause Mercury's orbit to precess by about a tenth of a degree of longitude per century. Does MESSENGER even notice?

Inquiries on the subject led me to Tony Taylor at KinetX Incorporated, a consulting company that handles MESSENGER's navigation. He was justifiably pleased about the incredible accuracy of the flyby, as the spacecraft missed its aim altitude by less than 1.5 kilometers (more on that here). He said (via email): "It was all the more satisfying since this is the first time since the Mariner 10 mission, over 30 years ago, that a spacecraft has ventured close to Mercury. Because it has been so long since we've been to this corner of the solar system, there were worries about the adequacy/accuracy of the modeling, including the heliocentric accuracy of the Mercury orbit ....Fortunately, we found Mercury to be within about 2 km of prediction (roughly a 1-sigma error), and laid that and most of our other worries to rest." 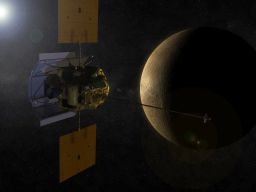 So, then, he turned back to the Newton-only formulation for everything, including the Sun, to see what would happen. "The resulting difference was somewhat larger than I expected: The flyby altitude at Mercury increased by about 10 km, but the closest approach time changed by about 13 seconds, which corresponds to about 65 km. Thus most of the change was in the downtrack direction. Our orbit determination predictions for the Mercury flyby would likely have been affected to the same order of magnitude, since we were using a span of tracking data that started September 30th. Targeting with a maneuver can be no better than the prediction of the flyby point, so the design of the maneuver on December 19th would have sent the spacecraft to the wrong place and time by perhaps a few tens of km. This may not have been disastrous, but it would have caused some consternation."

Assuming that the December 19 targeting was done correctly (with relativity taken into account), of course, would produce a smaller error in the flyby point: Taylor said the error would "amount to about 250 m in altitude and about 5 km along the trajectory. Thus if we'd had perfect prediction at that time (actually several days earlier when we designed the maneuver), the miss without general relativity would have been tolerable."

Of course, most of MESSENGER's time is spent not in flybys but instead cruising in solar orbit. What if the navigators failed to account for relativity as they tracked the spacecraft during cruise -- how long would it take for them to notice that the spacecraft wasn't where they expected it to be? Taylor checked that out too. "The delta accelerations due to general relativity for the Sun are tiny but not negligible. At aphelion for the post-flyby spacecraft orbit, this amounts to about 0.5e-6 mm/s2 [that is, fifty billionths of a millimeter per second squared], and at perihelion it's about 10 times larger. For comparison, the accelerations on the spacecraft due to solar radiation pressure are about 150e-6 mm/s2 at aphelion, and 450e-6 mm/s2 at perihelion. Thus, the relativity effect varies from about 0.4 to 1.2 percent of the solar pressure effect." (The solar pressure effect is, itself, a pretty tiny force; this is the same force you use for solar sailing.)

These accelerations are small but definitely not negligible. "Since the Doppler data we use for tracking is sensitive to the 0.1 mm/s level, unmodeled general relativity accelerations would have started showing up strongly in our data residuals after a few days, and would have resulted in estimation errors for the solar pressure model and for other parameters such as for an earlier maneuver on October 17th. These would have caused prediction errors for the flyby.

"The concluding summary, of course, is that general relativity is definitely required for accurate navigation of MESSENGER."

Fascinating. I'm glad of the original question and of Taylor's answers. I always need new questions, too, for my Q&A segment on Planetary Radio; so if anything you read or hear about planetary exploration makes you go "Huh?" then please send me your question and I'll do my best to answer!