I don't know how accessible these are to the non-U.S. readers, but tomorrow night will see premieres of two very interesting-looking space-themed shows. First up, on the public television show NOVA, is "Astrospies," about covert military space programs, parallel to the civilian space programs, run by both the Russian and American manned space programs. Everyone knows there's military satellites -- but I'd never heard of military manned spaceflight, so that should be interesting. It airs at 8 p.m. Eastern/Pacific.

Then, over on the Science channel, at 10 p.m. Eastern/Pacific, will be "Tank on the Moon," about the Lunokhods, the two Russian rovers that explored the Moon from 1970 to 1973. I don't know much about this mission beyond what I learned form an old Planetary Report article on the Lunokhods, so I'm excited to see this one. I know that Lou Friedman is one of the commentators, because every time it's advertised on the Science Channel, I hear his voice coming out of my TV, which is, frankly, a little disturbing. It's not right to hear your boss's voice emanating from your TV.

I'll post Wednesday with reviews of these two shows, for those of you unable to tune in. 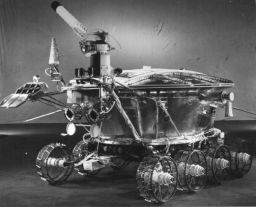 Lunokhod 1 landed on the Moon November 17, 1970. Its mission lasted 11 months. The Lunokhod was made up on an air-tight compartment containing equipment and a self-propelled undercarriage. It had a temperature control system with an isotope heat source, a radio and television transmitter, a command receiver, a power plant with solar back-up storage batteries, a remote control, a small-frame television, panoramic telephotometers, and a complex of scientific instruments. The Lunokhod's total mass was 750 kilograms (1,650 pounds), with the undercarriage weighing 105 kilograms (230 pounds). Its speed was 0.8 to 2 kilometers per hour (0.5 to 1.2 miles per hour).