Just before the Thanksgiving holiday week, JAXA issued a press release with images from another of Kaguya's many cameras, the Terrain Camera. It's a nice image at really high resolution; the enlarged version is 20 meters per pixel. (The camera is supposed to be capable of a factor of two better than that, but comparing the scale bars on the original images on the JAXA website, it's clear that this version was downsampled before being posted.) It's interesting to compare and contrast this image with the one I posted yesterday, from Chang'e 1, which was at a much lower (but still great) resolution of 120 meters per pixel. In the Kaguya image, you aren't aware of the overarching topography; what you see instead is how the lunar surface is peppered with craters of all ages and all sizes. The freshest craters include most of the smallest ones visible in the image; they have nice sharp outlines and raised rims. Older craters have been degraded by slow erosion from meteorites large and small striking the surface; their outlines are softened, and their originally raised rims have been worn down. If you sort of defocus your eyes, you can see that the whole area of the image is covered with large, old, degraded craters making subdued, overlapping bowl shapes. 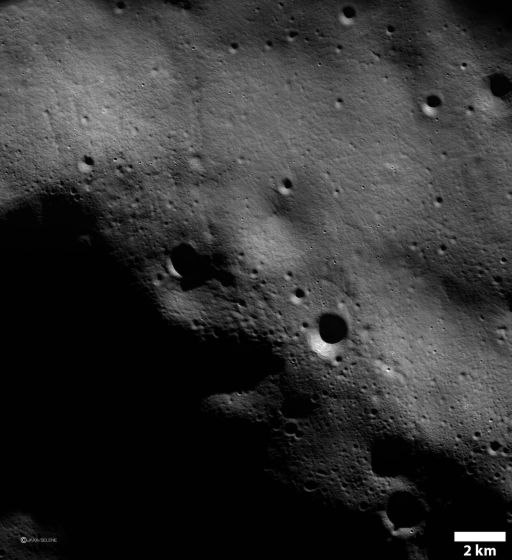 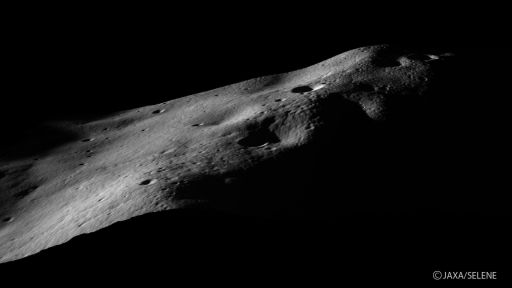 Kaguya's terrain camera not only gathers high-resolution images of the Moon, it does so twice from different perspectives, permitting the calculation of the three-dimensional shape of the terrain. This image is from the lunar farside, of a region 30 kilometers from the south pole.

In other Kaguya news, the mission also released some nifty 3D movies based on Terrain Camera data today. Grab your red-blue glasses and have a look. I think their website is getting hit hard, because I'm finding the animations to be stuttery. I sure wish they would post these in some format that could be downloaded and reposted to distribute the load!

There is also a presentation (PDF format, in Japanese only I'm afraid) that appears to show some first data received from several of the instruments, including the X-ray and gamma-ray spectrometers, magnetometer, and most interestingly, the lunar radar sounder. Radar sounding is pretty new in planetary science; there's two radar sounders probing the subsurface of Mars right now (MARSIS on Mars Express and SHARAD on Mars Reconnaissance Orbiter), but there hasn't been one sent to the Moon before. EDIT: Several readers have pointed out to me that radar sounders aren't THAT new; in fact, Apollo 17 brought one to the Moon. Thanks for the corrections. --ESL Google translations of some of the text regarding the radar sounder, LRS, found on the second-to-last page of the presentation include: "Surface structure exploration of the use of 4-6 MHz band noise is sufficiently low (-100 dBV) a month REDASAUNDA goal a few km to the surface from underground exploration &#20120;RU surface structure can be confirmed" which I think means that they have confirmed their ability to detect reflections from structures a few kilometers below the lunar surface, which is pretty cool. (I enjoy the katakana-written word "REDASAUNDA", which resulted from the English-to-Japanese-to-English transliteration, of course, of "radar sounder." I believe that the word "month" that frequently shows up in the Google translations should more properly be translated "lunar," so that "month REDASAUNDA" becomes "lunar radar sounder.")

While preparing this post I realized that we had never written a page about Kaguya's science instruments, so I just put one together (follow the link). I hope you are all aware that this website has a page for every single active space mission (and some past ones), with a mission overview and usually also pages on the mission's objectives and science instruments and sometimes more. If you ever have questions about space missions, please click on that button at the top of the page that says "Explore" and you'll see all of the background information that we have to offer, and look in the left nav bar to see what opens up for each mission.