Chang'e 1 returns its first image from the Moon

On Monday, with much pomp and circumstance (and rightfully so), Chinese premier Wen Jiabao unveiled the first image returned from the Moon by the Chang'e 1 orbiter, China's first spacecraft to depart Earth orbit. That's something only Russia, the United States, ESA, and Japan have managed to do before. 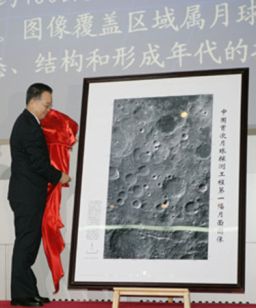 Chinese Premier Wen Jiabao unveils the moon image captured by China's lunar orbiter Chang'e 1 during a ceremony at the Beijing Aerospace Control Center on November 26, 2007.
I didn't link to it yesterday because all the versions I could find online were at woefully low resolution, but thanks to a pointer from Wang Chun I now have my hands on a full-resolution version of the image, 120 meters per pixel, 2278 by 3810 pixels in size. Here it is: 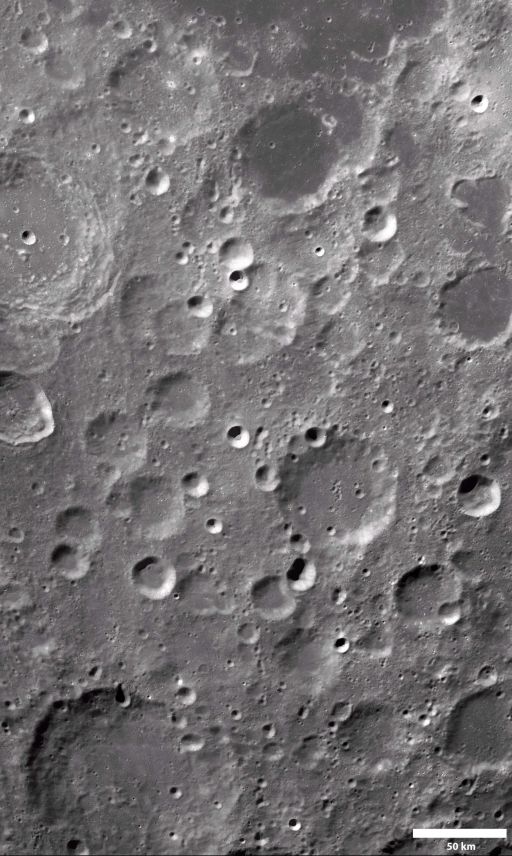 This image is the first returned from the Moon by Chang'e 1, China's first spacecraft beyond Earth orbit. The 19 separate images that compose this view were captured over two days, November 20 and 21. Each image was 60 kilometers wide; the entire image is about 460 kilometers long and 280 kilometers wide, located within a box from 54 to 70 degrees south latitude and 57 to 83 degrees east longitude. It includes mostly areas of highlands but contains some of the dark basalt plains of Mare Australe at the upper right. The scale bar at lower right is 50 kilometers long. The 66-kilometer-diameter crater Gill is just to the lower right of center in this image. Cut off at the upper left edge is 91-kilometer Pontecoulant. At the bottom edge is 94-kilometer Helmholtz.
I feel I should point out that calling this the "first image from Chang'e 1" is slightly misleading. This is no raw data product fresh from the spacecraft; this is a highly processed image comprising 19 separate swaths, each 60 kilometers wide (they must overlap a lot at this high southern latitude). The images have been reprojected, mosaicked, and blended so well that I can't find a trace of seams separating the swaths. It's a beautiful product -- clearly the Chinese wanted to put their best foot forward.

It's very nice-looking, but how does it compare to what we have from other missions? The 120-meter resolution is comparable to the best obtained by Clementine, and also comparable to the global map that will be obtained by Lunar Reconnaissance Orbiter. It's lower-resolution than SMART-1's AMIE, and also lower than most of the cameras on Kaguya. (Which reminds me, I also have some very nice images from Kaguya's terrain camera to post -- later.) Generally speaking, you trade resolution for coverage -- meaning that if your spacecraft takes higher resolution photos, it's less likely to cover the whole planet. The resolution of this camera is a comfortable one for building a global map; Chang'e 1 should do that in stereo, creating an atlas that not only shows the landforms but also shows their topography.

You can check out some of the Lunar Orbiter photos of the same general area here and here (that's how I hunted down the names of the craters). And here's the Google Moon view of the same area, which uses the Clementine atlas as a base map. As you can see, the Clementine images are quite comparable to this one.