But before the space news, let me mention that I will be hosting the Carnival of Space this Thursday! If you've said something interesting about space, go read the instructions for submission.

A reader pointed out to me, after my remark about Rosetta having the most circuitous path of any space mission I'd heard of, that the path taken by the International Cometary Explorer or ICE was similarly squirrelly. It launched in 1978 -- then named International Sun-Earth Explorer 3 (ISEE-3) -- to study Earth's magnetosphere and its interaction with the solar wind from the L1 point, the Lagrange point between Earth and the Sun where the force of gravity from the two bodies cancels out. When it was repurposed as ICE, it fired its engines to leave L1, flew past Earth, circled around L2 (the Lagrange point on the far side of Earth from the Sun), then made five (count them, five!) gravity assist flybys of the Moon before departing to visit comet Giacobini-Zinner.

At the close of the same blog entry I remarked on the necessity for different space agencies to share resources. Well, on Thursday, ESA announced that they had successfully transmitted a commands to, and received telemetry from, China's Chang'e 1, now in lunar orbit. China permitting ESA to command Chang'e 1 is a big deal. Not only was ESA temporarily controlling their spacecraft, but in order to control it they presumably were also fed information about how to talk to the Chinese spacecraft. That demonstrates a pretty high level of trust and willingness to cooperate between the two agencies.

For more than a year, ESA has been soliciting images of Venus taken by amateurs as part of its Venus Amateur Observing Project, in order to establish a more continuous time series of observations of Venus' atmosphere than is possible from orbit. They announced last week that they have created a new online Venus Active Archive to make image submission and retrieval easier. Venus is such an accessible target to backyard observers that I should think there would be a huge number of you out there who could take photos that would be of use to researchers. 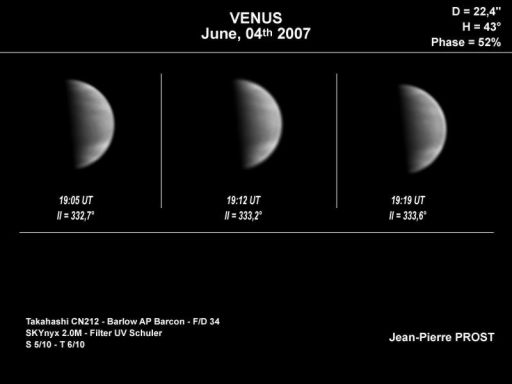 These images of Venus were taken by amateur Jean-Pierre Prost with a 21-centimeter telescope on June 4, 2007 and submitted to ESA's Venus Amateur Observing Project (VAOP). The project is building a database of Earth observations of Venus in support of the Venus Express mission. 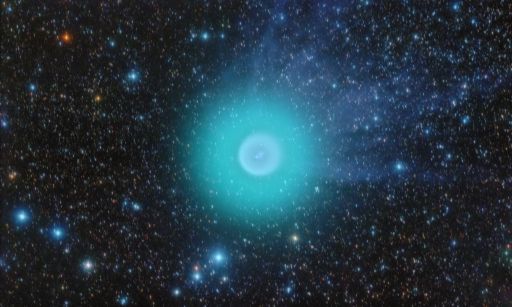 This image of comet 17P/Holmes was taken from an observing site in Spain, 2,000 meters above sea level, over the night of November 1-2, 2007. To bring out details in the inner and outer coma and much fainter tail, they combined 26 one-minute, 4 ten-minute, and 3 fifteen-minute exposures.

Unless you've been living in a cave for the last few days you'll know that there's been some drama on the Space Station, with one of the solar panels tearing upon deployment, and some tricky repair work being done. If you'd like to catch up on this story, there's a play-by-play in the discussion thread at unmannedspaceflight.com.

I received a publicity blurb for a NOVA episode titled "Sputnik Declassified," to air on PBS tomorrow night (November 6) at 8 pm Eastern time; check your local listings. The blurb says, "In 'Sputnik Declassified,' NOVA probes the prehistory of the Space Age, examining what makes Earth orbit so difficult to achieve; why the superpower rivalry in the wake of World War II made spaceflight attainable for the first time in history; and how a worldwide civilian science effort called the International Geophysical Year served as the occasion for both Sputnik I and the American response." For those of you who are outside the US or have no PBS station, NOVA episodes are usually available on DVD pretty soon after they premiere on TV. 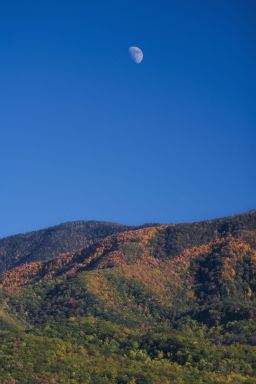 Moonrise over the Great Smoky Mountains

The first quarter Moon rises over the changing fall colors of the Great Smoky Mountains.

This week on Planetary Radio Mat Kaplan talks with John Vilja, the program manager at Pratt and Whitney in charge of building rocket engines for manned Moon launchers. And I think I never mentioned last week's show, an interview with Bill Blair on the FUSE mission, which was shut down for good a couple of weeks ago.

It's the last week of the Mars Trivia Contest. Enter now and you'll also be entered in next week's grand prize drawing!

Finally, A. J. S. Rayl has just posted the monthly update on the Mars Exploration Rovers, including late-breaking news on the decision about where Spirit will spend the coming Martian winter.