Last week's Cassini Significant Events Report had some interesting details on the causes, results, and resolution of the spacecraft's going in to safe mode just minutes after it started playing back the data from the Iapetus flyby.

On September 12, a galactic cosmic ray (meaning a high-energy ion originating from outside our solar system) hit a Solid State Power Switch on one of Cassini's Traveling Wave Tube Amplifiers, "TWTA-B", an important part of Cassini's radio transmitter. The Solid State Power Switch was switched off, depriving power from the Traveling Wave Tube Amplifier, cutting off radio transmission. The spacecraft detected the problem, called up its fault protection routines, and entered safe mode. In safe mode, the spacecraft cancels all ongoing programs and instead gathers basic information on its health, while attempting to contact Earth. Since Cassini was already in radio contact with Earth when the event happened, controllers on the ground were able to restore proper communication with the spacecraft very quickly and begin diagnosing the problem right away.

They had to work fast to restore the spacecraft to normal operations, because one of the biggest maneuvers of Cassini's orbital mission was planned for late on September 13. Most of Cassini's orbit trim maneuvers, or OTMs -- firings of the rockets usually around apoapsis and periapsis, which shape Cassini's path around Saturn -- involve changes in velocity amounting to a few millimeters to a few centimeters per second. This one involved 83.4 seconds of thrust and changed Cassini's velocity by a whopping 13.48 meters per second.

This paragraph from the significant events report tells you how hairy the situation was for the navigators:

This OTM was performed before the spacecraft had been fully reconfigured after safing, without a background sequence running. Real time commands were uplinked to set up the initial and final conditions for the burn. Because the reaction wheels (RWA) had been turned off by safing, thrusters were used for both the roll and yaw turns before the OTM. Usually rolls are on RWAs and yaws are on thrusters for a Main Engine maneuver. The OTM block turned the RWAs on following the burn.

On Friday, September 14, they continued fault recovery by switching back from TWTA-A to TWTA-B; the spacecraft is now operating normally on the amplifier that had been inadvertently switched off by the galactic cosmic ray hit. Finally, on Sunday, the 16th, all of the instruments were powered back on, and the "background sequence" of programmed commands for the spacecraft's science observations was finally reactivated.

Here's the latest view of Iapetus, looking at the trailing side and the "snowman." 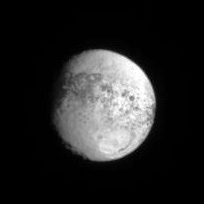 Cassini took this photo of Iapetus' bright or trailing side on September 23, 2007 from a distance of 2.1 million kilometers (1.3 million miles).