After Kevin was Jacque Blamont of CNES talking about sending balloons to Venus, Mars, and Titan. The principle of flying balloons has been known since 1783 - but they're not a particularly efficient way of carrying a payload around. The Vega balloons in 1984 had a science payload of just 7 kilograms for a total spacecraft mass of 160 kilograms. The proposed Mars '94 balloons were a 30-kilogram payload for a mass of 300 kilograms. Flying a balloon around Venus is also a short experiment - even at 60 kilometers altitude, the winds are 100 meters per second and thus rotate around the entire planet in about 5 Earth days. So if you deploy a high pressure balloon on the night side - 2 days later it's local noon, and gets massive heating, causing it to burst.

Jacque was rushed towards the end of his presentation, but he described how a 45-meter-tall balloon on Mars with a 30-kilogram gondola would last a long time oscilating between dragging a tether along the ground at night, and reaching as high as 3 kilometers during the day....and Titan...Titan is perfect for ballooning. Jacques first proposed a Titan balloon in 1978. Using a 80-kilogram RTG you could heat a 30-meter-wide hot-air balloon internally augmented with a smaller hydrogen balloon and fly around with 20 kilograms of instruments at a height of 10 kilometers for ever. 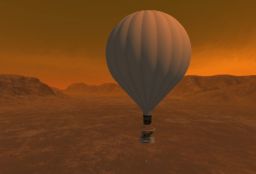