It was just a coincidence, but a cool one, that I got a chance to visit the Mojave Spaceport so soon after the dramatic "New Space" success of the launch and Space Station docking of SpaceX's Falcon 9 and Dragon. My host was Will Pomerantz, VP of Special Operations for Virgin Galactic. (The title, he says, "means anything I want it to.") Bill Nye, Mat Kaplan, and I visited The Spaceship Company and Scaled Composites, where they are building the next SpaceShipTwo and WhiteKnightTwo craft.  We had a chance to walk up close to the prototype SpaceShipTwo and its mothership WhiteKnightTwo and actually touch them. I got to climb a few rungs up a stepladder and put my head inside and see the cockpit of WhiteKnightTwo. I wasn't allowed to take pictures on that part of the tour, sadly, but I'll do my best to describe it. 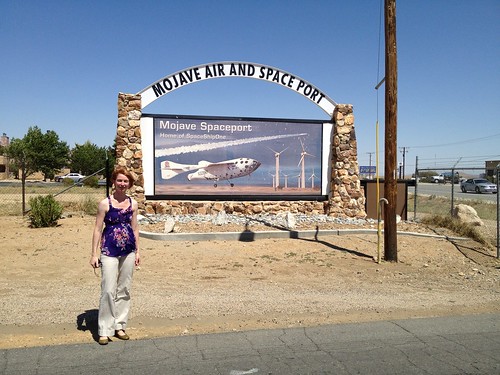 First, a little background. SpaceShipOne is the craft that won the X-prize for the first privately-built craft to go to space (defined as 100 kilometers altitude) twice in a week.  SpaceShipTwo is its much larger successor.  SpaceShipTwo will get to space the same way SpaceShipOne did. It's carried to high altitude by a twin-fuselage mother ship, then dropped, after which rocket engines take over to carry it above the atmosphere.  It will get three or four weightless minutes with black space above before plummeting Earthward, its fall stabilized by twin tails that tip upward (an operation they call "feathering"). It glides to a landing, the mothership chasing behind it.

The mothership, WhiteKnightTwo, has flown more than 80 times and is just about cleared for routine flight.  SpaceShipTwo has a bit farther to go, having gone aloft a bit more than 30 times; of those, it's been dropped from WhiteKnightTwo 16 times. All of those flights have been subsonic. The current estimated timeline is about two years until customers can pay to go to space.

Will took us first to a large hangar, one of the buildings in which the construction happens. No aircraft are currently under construction there now, but it was neat to see the armatures, on which they build the gigantic carbon-fiber wing spar for WhiteKnightTwo and the frame of SpaceShipTwo. 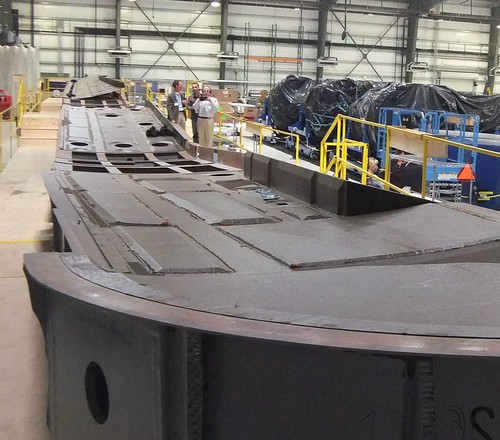 I thought the view of that armature was worth showing in 3D, so grab your red-blue glasses: 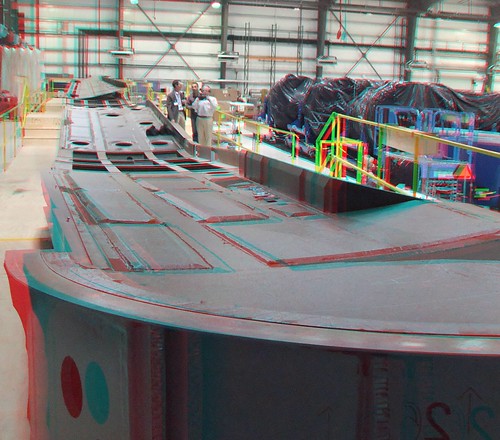 Next we moved over to another building where they're manufacturing carbon-fiber fuselage and wings. The twin fuselages of WhiteKnightTwo and SpaceShipTwo are actually identical, which makes manufacturing easier. That was a recurring theme for the day: design decisions based not only on whether things worked but also on how expensive they were to manufacture, especially in quantity. This is private industry, and eventually, if they are to succeed over the long term, they have to be able to make a profit.  We saw the carbon-fiber bodies of SpaceShipTwo and WhiteKnightTwo, both serial numbers two. To me, they looked like bottles, or compressed gas canisters, narrowing to a neck at one end. But they're not metal; they're made of rigid black epoxy-impregnated carbon-fiber fabric, with portholes cut in. I didn't get a better angle on this because the ITAR compliance officer was jumpy about this room. 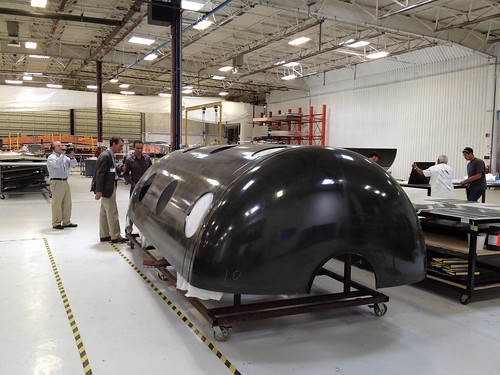 Here's a closeup of the material that composes these shells. It's two thin, stiff carbon-fiber fabric layers with a thicker honeycomb layer in between. It's very, very light; it felt even lighter than balsa wood. But very, very stiff. Both Bill and I tried to pull this corner apart, and it didn't feel like there was any give either in the joint or in the material itself. 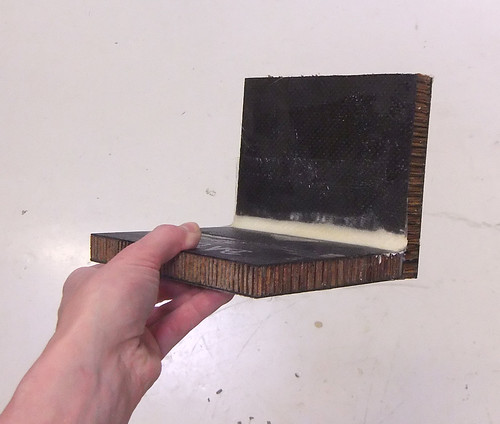 So that was neat. But the coolest thing, by far, was getting a chance to walk inside the hangar where there were a half-dozen guys working on the actual serial number one of WhiteKnightTwo and SpaceShipTwo.  They're both beautiful and unique birds, WhiteKnightTwo with its twin fuselages (one instrumented, one with painted-on windows), and SpaceShipTwo with its odd vertical wing structures.  Of course, this is the part where I couldn't take pictures.  So here's some stray observations from that visit, and I hope that those of you who know more about aircraft engineering and SpaceShipTwo/WhiteKnightTwo than I do will forgive any inaccuracies in my descriptions.

All in all, it was a pretty cool tour, and I hope to see a future SpaceShipTwo test flight!