Today, March 8, is International Women's Day, a day that has its origins in nineteenth-century protests against inhumane working conditions in the garment industry. Nowadays, people around the world variously use the day either to honor women in their lives (not unlike Mother's day in the U.S.) or to highlight inequities that remain in working conditions, access to health care and education, personal security, and other issues.

I think that the latter goal is a good and important one but I'm not fond of the former. For me, celebrating me or any other woman today only serves to emphasize that to be a woman is still considered to be "other." It should not be exceptional that I am a woman in science; it should not be something worth celebrating. It should just be. The fact that it is still considered exceptional and something about which awareness needs to be raised with a special day is something I want to mourn, not celebrate. (For the record, I don't like Mother's Day either. Do nice things for your mom on other days, too, kids.)

So for International Women's Day I ask that people read this PNAS article about how "Science faculty's subtle gender biases favor male students," which got a lot of press last year, including this excellent writeup by Kenneth Chang. And have an honest conversation with yourself, whether you're male or female, about whether you would behave similarly to the people in the study. And then, rather than spending just one day recognizing the inequities that remain for women in science (or in general), I ask that you resolve to be conscious, not just today, but tomorrow, and for the rest of the year, of whatever biases you may have, and consciously act to counteract them.

We all prejudge others; to do so is as natural as breathing. I'm no less guilty of this than anybody else, and I don't notice myself being prejudicial as often as I wish I would. We're biased against people who don't look like us or who don't talk like us or who are less privileged than us or who make different life choices than us, where "us" is an ideal of the group we are in or want to belong to. I don't believe it's possible to make these biases go away completely, but I do believe it's possible to be conscious of them, and to work (and it is work) to prevent our biases from influencing everything from hiring decisions to the list of people you invite to speak at an event to what you say about other people's parenting decisions behind their backs.

If you think I'm a party pooper and do want to use today to celebrate women in science, then check out the SETI Institute's Twitter feed; they are posting lots of photos and brief Twitter profiles of women of space science doing awesome things today. And, as always, issues important to women in planetary science are discussed at the blog of the same name, where you'll find lots of profiles of awesome women in planetary science. In that spirit, here are my two favorite women of science being awesome:

The older of the two has a new theory about Saturn's rings that I think deserves some attention: 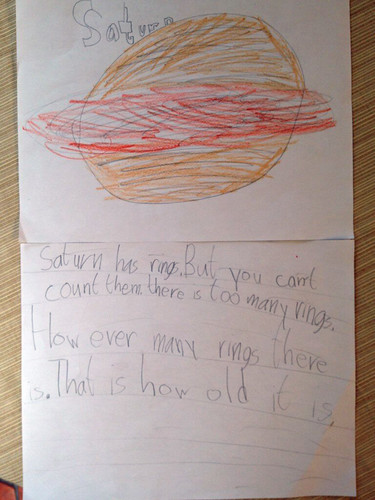