Chandrayaan-2 is an Indian mission to send an orbiter, lander, and rover to the Moon. The 3 vehicles launched as 1 combined spacecraft to lunar orbit, and the lander, carrying the rover, attempted but apparently failed to touch down in the Moon's southern hemisphere. The orbiter continues to study the Moon from above.

The mission builds on ISRO's Chandrayaan-1 orbiter, which launched in October 2008 and operated for 10 months. Chandrayaan-2 features improved instruments and new technologies intended for future planetary missions. The orbiter is planned to operate for one year (previously reported as 2 years), while the lander and rover were expected to survive one lunar daytime period had they successfully landed. 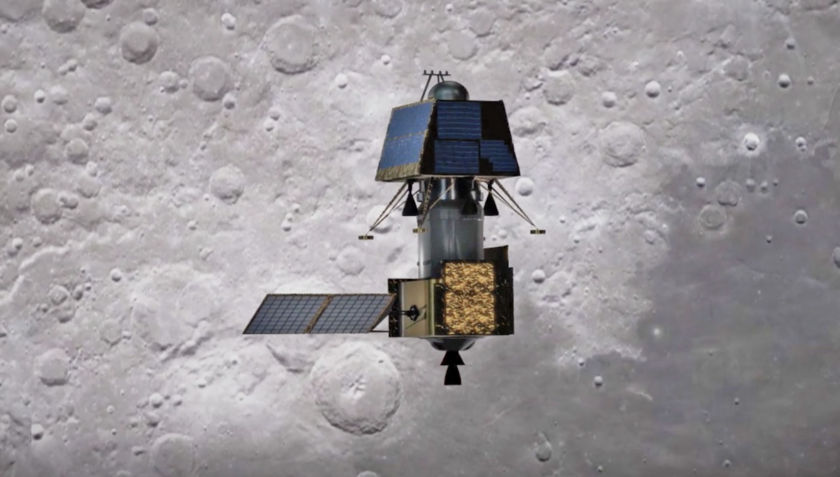 This screenshot from an ISRO video shows Chandrayaan-2 cruising above the Moon. The Vikram lander (top section) is still connected to the orbiter at this point in the mission.

The Chandrayaan-2 orbiter hopes to build on the data collected during the Chandrayaan-1 mission using improved instruments. Science goals include mapping the Moon’s topography, investigating surface mineralogy and elemental abundances, studying the lunar exosphere, and looking for signatures of hydroxyl and water ice.

The spacecraft consists of an orbiter, lander, and rover which together weigh 3,877 kilograms (we estimate this is wet mass). Masses reported over time: 3850 kilograms, 3890 kilograms, 3320 kilograms. 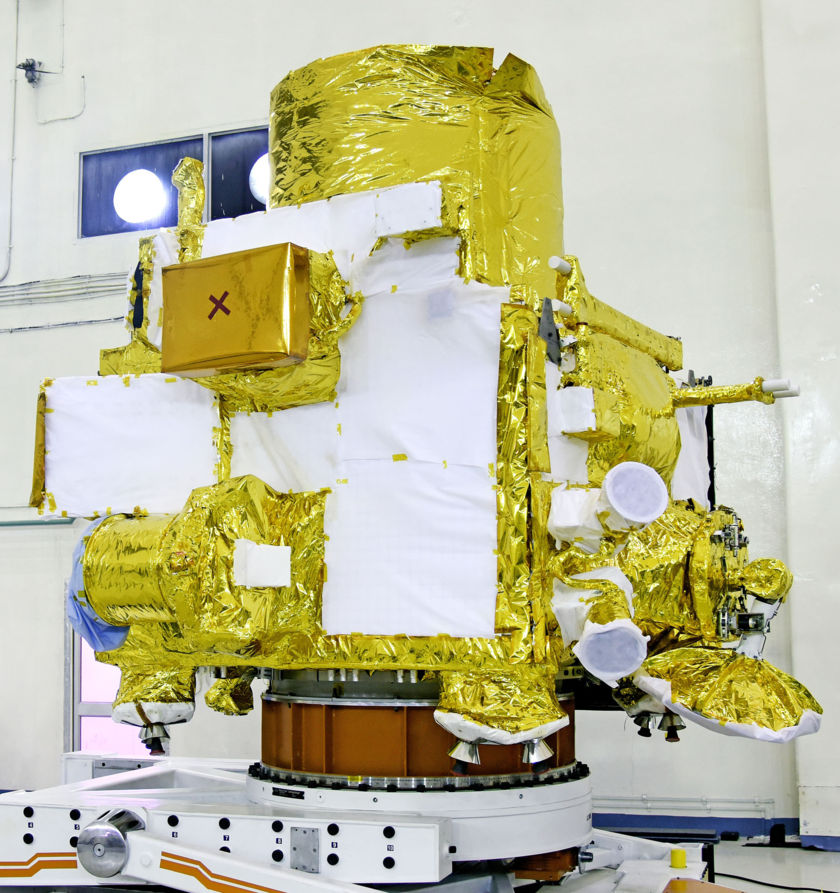 Chandrayaan-2 Orbiter in the Clean Room

The Chandrayaan-2 orbiter prior to integration and launch.

In addition to collecting science data with its onboard instruments, the orbiter serves as a relay between the Vikram lander and the IDSN, or Indian Deep Space Network. (The lander can also communicate directly with the IDSN.) Its solar panels generate 1 kilowatt of power.

Mass: 2,379 kilograms. We believe this is wet mass and had previously derived a figure of 2,294 kilograms using known masses from other components.

Chandrayaan 2 Large Area Soft X-ray Spectrometer (CLASS): CLASS measures the Moon's X-ray Fluorescence (XRF) spectra to examine the presence of rock-forming elements such as Magnesium, Aluminium, Silicon, Calcium, Titanium, Iron, and Sodium. The XRF technique will detect these elements by measuring the characteristic X-rays they emit when excited by the Sun's rays.

Solar X-ray Monitor (XSM): Supports CLASS by observing the X-rays emitted by the Sun and its corona, and measuring the intensity of solar radiation in those rays. Measures the full solar X-ray spectrum every second in the 1-15 keV energy range.

Orbiter High Resolution Camera (OHRC): Captures images of the landing site from two look angles to generating DEMs (Digital Elevation Models) that will be used to search for potential hazards. Post-landing, they will be used for further scientific survey. OHRC images cover an area of 12 x 3 kilometers, and have a resolution of 0.32 meters.

Synthetic Aperture Radar (SAR): An L- and S-band radar system used to detect water ice inside permanently shadowed craters, and globally map the thickness and electrical conductivity of the lunar regolith. This will be the first L-band radar mapper to orbit the Moon.

Imaging Infrared Spectrometer (IIRS): Characterizes and maps the abundance of hydroxyl (OH) and molecular water in the Moon's polar regions. Sensitive to light with wavelengths between 0.8 and 5 microns.

Chandra Atmospheric Composition Explorer 2 (ChACE-2): A neutral mass spectrometer to sample atoms in the tenuous atmosphere above the Moon’s polar regions. CHACE 2 builds on the CHACE experiment from Chandrayaan 2. 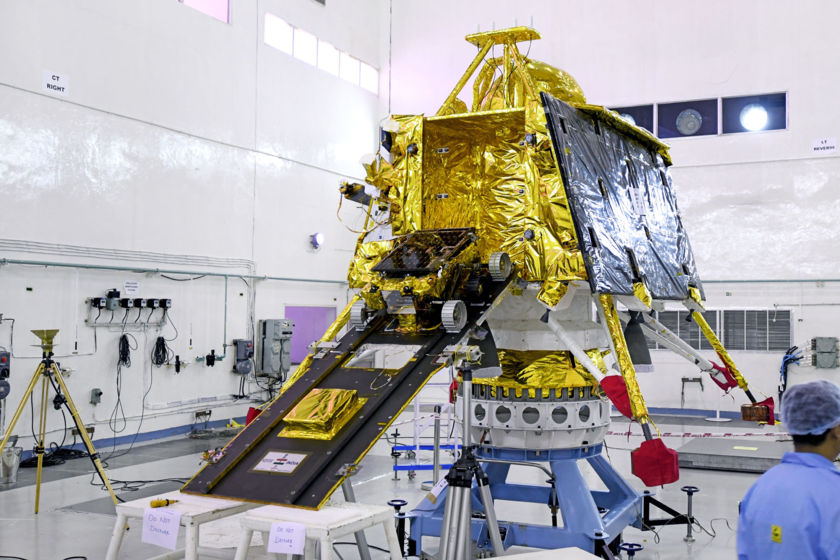 This image shows ISRO's Chandrayaan-2 Vikram lander and Pragyan rover prior to integration and launch.

The lander is named Vikram, after Vikram Sarabhai, the founder of India's space program. It is equipped with 4, 800N engines and a series of 50N attitude control thrusters. Its solar panels can generate 650 watts of power. It can communicate with both the orbiter or directly with the IDSN.

Mass: 1,471 kilograms. We believe this is wet mass and had previously estimated a figure of 1,571 kilograms by adding 100 kilograms of mass growth to an original NASA amount.

Instrument for Lunar Seismic Activity (ILSA): A seismometer to record moonquakes to study lunar core; may offer new insights due to location in the lunar southern hemisphere.

Radio Anatomy of Moon Bound Hypersensitive ionosphere and Atmosphere (RAMBHA-Langmuir Probe): A Langmuir probe to study plasma density in the thin atmosphere near the Moon's surface.

The lander will also be equipped with a NASA-provided retroreflector. 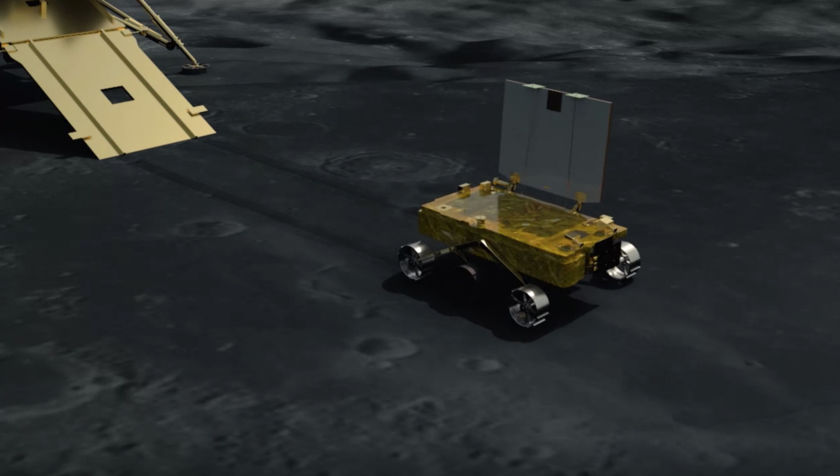 Chandrayaan-2's Pragyan rover explores the Moon in this screenshot from an ISRO video.

The rover, which is named Pragyan (wisdom), has 6 wheels and uses a radio antenna to communicate with the lander, which relays data to Earth. It can travel up to 500 meters and its solar panels generate 50 watts of power.

ISRO's Chandrayaan 2 website says the landing would have taken place in a high plain between craters Manzinus C and Simpelius N, at a latitude of about 70° south. This matches the prime site identified in Amitabh et. al (2018), which reported two sites:

These coordinates were cited again in Sinha et. al (2019), which describes the landing ellipse as 15 x 8 kilometers. 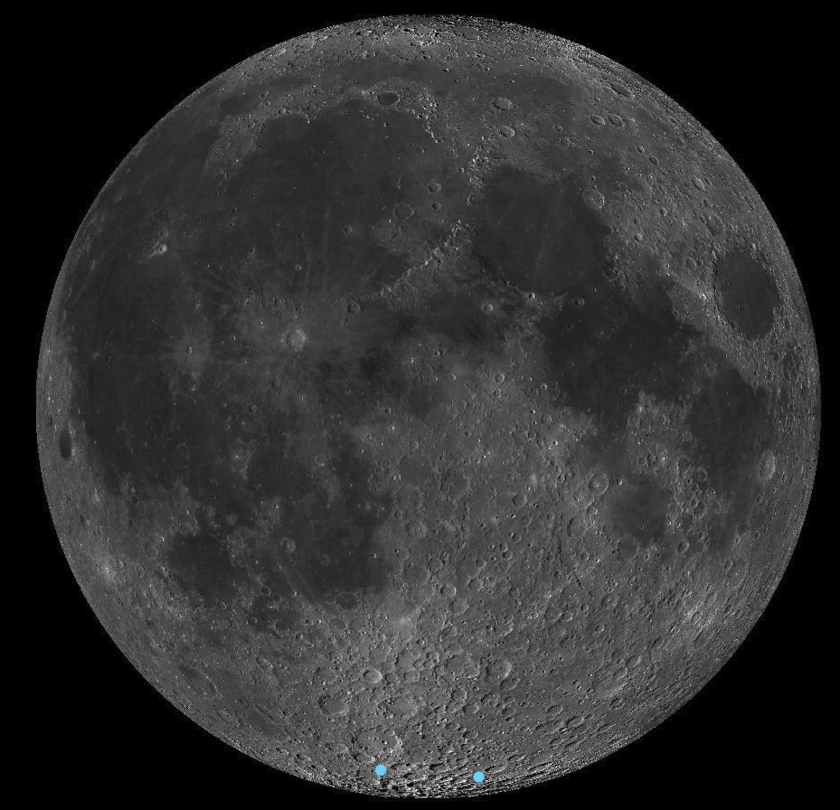 This zoomed view of the Moon's south polar region, as seen from Earth, shows the prime (right blue dot) and alternate (left blue dot) Chandrayaan-2 landing sites. The landing sites were mapped using LROC Quickmap and are only for estimation purposes.

Note: In April 2019, ISRO chair K. Sivan said the landing site would be at 74 degrees south, but this may have been a misstatement.