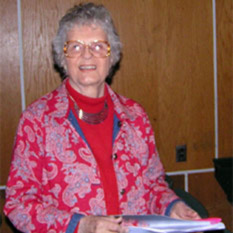 Ursula Marvin is a Geologist Emeritus and historian of science at the Harvard-Smithsonian Center for Astrophysics. Dr. Marvin received her BA in History from Tufts University and her MS and PhD in Geology from Harvard University.

From 1952 to 1958 Dr. Marvin and her husband, a mining geologist, spent six years in Brazil and Angola examining mineral deposits. Between 1978 and 1985, she spent three field seasons in Antarctica, two of them collecting meteorites and one sampling the Cretaceous-Tertiary boundary for evidence of the impact that is thought to have triggered the extinction of the dinosaurs 65 million years ago.

Dr. Marvin is the author of more than 120 scientific articles and a book titled, "Continental Drift, the Evolution of a Concept". Asteroid Marvin was named for her in 1991 by the Minor Planet Bureau of the International Astronomical Union, and Marvin Nunatak, a mountain peak in Antarctica, was named in her honor in 1992. Dr. Marvin officially retired in 1998, but continues her research. She is also active in resolving problems in undergraduate education, especially the personal and professional problems women face pursuing careers in science.