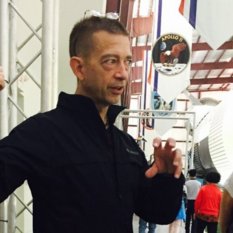 Richard "Rick" Davis currently works at NASA Headquarters as the Assistant Director for Science and Exploration in the Science Mission Directorate (SMD). In this capacity, he does extensive integration work between SMD and the Human Exploration and Operations Mission Directorate (HEOMD) on deep space policy, including Mars exploration policy. Rick co-leads a joint SMD-HEOMD study to begin the process of identifying potential human landing sites on Mars, using current reconnaissance assets at Mars. A second goal of the effort is to define future reconnaissance needs which will be required to support human surface operations on the planet. Prior to this, he worked in the Office of Strategy Formulation in the Office of the Administrator on Mars policy as well as efforts to streamline the way the Agency partners with other organizations.

Before being assigned to Headquarters, Rick worked at Johnson Space Center and held numerous positions in the Flight Operations Directorate. He has extensive international experience with the International Space Station (ISS). Rick has chaired multiple international panels/working groups, and was selected as a Space Station Capsule Communicator (CAPCOM) in 2003. In that capacity, he served as the primary interface between Mission Control and the crews onboard the ISS. He was the Lead CAPCOM for the Expedition 13 mission and Space Shuttle Mission, STS 119, and also managed all non-astronaut CAPCOMs. He led the International Crew Training Integration Group, which was responsible for integrating the content of ISS crew training with the International Partners, as well as providing on-orbit training and psychological support content for crews onboard the Space Station. Prior to this, Rick worked as the Deputy Director of NASA Operations in Star City, Russia. He lived and worked in Russia altogether for over three years.

Rick holds a BA in History, a BS in Aerospace Engineering at the University of Virginia and a MS in Aerospace Engineering at the University of Illinois, Champaign-Urbana. He is fluent in Russian and Spanish. He has received numerous awards, including the NASA Exceptional Service Medal and the NASA Exceptional Achievement Medal for work as an ISS CAPCOM. He enjoys running, hiking, SCUBA diving and flying.

Biographical information from the AIAA.