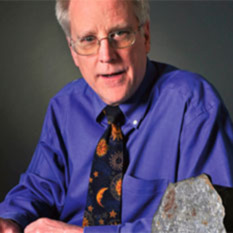 Richard P. Binzel is a Professor of Planetary Sciences at the Massachusetts Institute of Technology. He is the inventor of the Torino Scale, a method for categorizing the impact hazard associated with near-Earth objects (NEOs) such as asteroids and comets.

Binzel was awarded the H. C. Urey Prize by the American Astronomical Society in 1991. He also was awarded a MacVicar Faculty Fellowship for teaching excellence at MIT in 1994. He is a co-investigator on the OSIRIS-REx mission.

Binzel was on the Planet Definition Committee that developed the proposal to the International Astronomical Union's meeting in Prague in 2006 on whether Pluto should be considered a planet. Their proposal was revised during the meeting and Pluto is now considered a dwarf planet. However, Dr. Binzel has strong feelings contrary to this collective decision and would prefer for Pluto to still be classified as having full planet status.

Binzel is an editor of the books Seventy-five years of Hirayama asteroid families: The role of collisions in the Solar System history and Asteroids II.