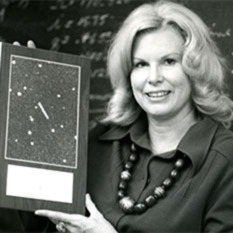 Eleanor F. "Glo" Helin (November 19, 1932 – January 25, 2009) was an American astronomer. She was principal investigator of the Near Earth Asteroid Tracking (NEAT) program of NASA's Jet Propulsion Laboratory. She retired in 2002.

Helin is credited as the discoverer of the object now known as both asteroid 4015 Wilson-Harrington and comet 107P/Wilson-Harrington. Although Wilson and Harrington preceded her by some decades, their observations did not establish an orbit for the object, while her rediscovery did.

Helin was active in planetary science and astronomy at the California Institute of Technology and the Jet Propulsion Laboratory for over three decades. In the early 1970s, she initiated the Palomar Planet-Crossing Asteroid Survey (PCAS) from Palomar Observatory. This program is responsible for the discovery of thousands of asteroids of all types including more than 200 in high inclination orbits, other asteroids in rare and unique types of orbits, 20 comets, and approximately 30 percent of the near-Earth asteroids discovered worldwide.

Helin organized and coordinated the International Near-Earth Asteroid Survey (INAS) during the 1980s, encouraging and stimulating worldwide interest in asteroids. In recognition of her accomplishments, she received NASA's Exceptional Service Medal.

After conducting the PCAS photographic search program from Palomar for nearly 25 years, Helin concentrated on the new, upgraded Near Earth Asteroid Tracking (NEAT) search program using electronic sensors on a large aperture telescope. She was the principal investigator for this program operating from JPL, for which she received the 1997 JPL Award for Excellence. She also received NASA's Group Achievement Award for the NEAT Team.

In operation since December 1995, NEAT is the first autonomous observing program; no JPL personnel are on-site, only the JPL Sunspark computer which runs the observing system through the night and transmits the data back to JPL each morning for team member review and confirmation. NEAT has detected over 26,000 objects, including 31 near-Earth asteroids, two long period comets and the unique object, 1996 PW, the most eccentric asteroid known (e = 0.99012940), which moves in a long-period (4110.50 a), comet-like orbit (semi-major axis 256.601 AU).

Caltech Optical Observatories hosted a Helin Commemorative Workshop on 28 September 2010 to honour the contributions of Eleanor and Ronald Helin.Palomar Observatory opened an exhibit dedicated to her and her work with the 18-inch Schmidt telescope in September 2013.