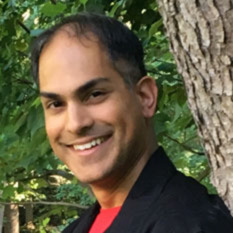 Dipak Srinivasan is a part of the Principal Staff at The Johns Hopkins University Applied Physics Laboratory (APL), in its Space Exploration Sector. He has a Bachelor’s and Master’s in Electrical Engineering from Cornell University, and another Master’s in Applied Physics from Johns Hopkins. He has led diverse teams to develop or operate systems to enable several NASA/APL spacecraft missions, including the MESSENGER mission to Mercury, the New Horizons mission to Pluto, the STEREO solar observatories, and most recently the Van Allen Probes mission to study our planet’s radiation belts.  He is currently the lead communications engineer for NASA’s Europa Clipper mission, and chairs a conference session at the International Astronautical Congress discussing deep-space and near-Earth communications systems.
As active STEAM advocates, Dipak and his wife, Aparna, regularly give talks at their local schools to energize young kids’ enthusiasm for both space science and engineering. Dipak is also an avid trumpet player and music composer/arranger, currently performing with the Hopkins Symphony Orchestra, and he also coaches his daughters’ soccer teams.