Starting in 2013, five teams of humans have voluntarily isolated themselves in a little dome on the side of a Hawai'i volcano for an experiment called HI-SEAS (Hawai'i Space Exploration Analog and Simulation), which simulates what it might be like to live on Mars. Each mission lasted between four months and a year. A sixth was underway in February when a crew member was injured, forcing the simulation to be canceled. Actually, that might have been for the best, since Google Maps says the HI-SEAS habitat is just 20 miles from the erupting Kīlauea volcano!

The HI-SEAS dome has just 13,000 cubic feet of space, making it a cozy two-and-a-half times smaller than the International Space Station. Crews brings all their food and supplies with them, and communicate with mission control under a simulated time delay, just like on Mars. They also wear spacesuits when they go outside to explore the volcano's Mars-like terrain.

Want to know what a HI-SEAS mission is like? If so, you're in luck, because I have a certified Funpost! recommendation: a new podcast from Gimlet Media called The Habitat. There are seven episodes, each about a half-hour long. The host and reporter is Lynn Levy, who got the HI-SEAS IV crew to send her audio diaries during their year in isolation. 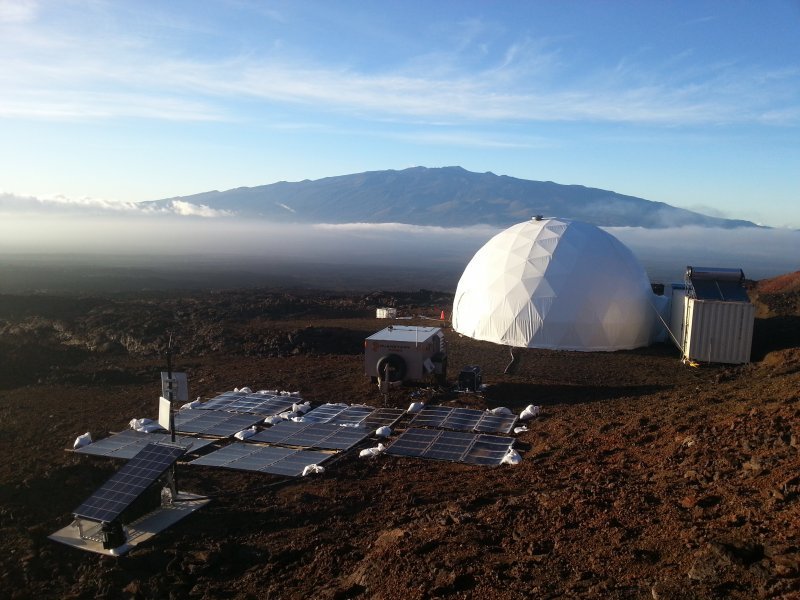 Not surprisingly, the HI-SEAS IV crew didn't always get along. Researchers have noticed crews' tolerance for each others' annoying habits wears thin at about 6 months. Take, for instance, a crew member who likes to announce what he is doing, whether it's making breakfast burritos or eating a snack. This really starts to drive his fellow fake Martians crazy. It seems like a minor thing, but long periods of confinement with other humans apparently makes you a little loopy!

The HI-SEAS crew would probably not enjoy my company, by the way. I have similar, weird verbal habits, like polling my family for assertions that they had a good time immediately following any outing. WELL, I will say to my daughter in my most Dad-like voice, DID YOU HAVE FUN AT THE PLAYGROUND? (The only correct answer is yes.)

The Habitat also has hookup drama! In episode 4, "She Likes to Camp Alone in the Finnish Winter," Lynn tries to figure out whether two crewmembers who are very friendly with one another are in a relationship, only to discover a DIFFERENT couple has paired off! It's like a dating reality show, but for nerds.

Also, there's poop! The HI-SEAS crew uses a composting toilet, which is… not for me. Have you ever seen one of those things? I once went to a greywater harvesting class, and was quite enjoying my tour of a low-environmental-impact home right up until the hosts showed me the composting toilet. NO THANKS. I am all for protecting the environment, but I can't compromise on sewer-based plumbing. In the podcast, the composting toilet breaks, so two of the crewmembers have to repair it by cleaning out everyone's recent bowel movements by hand. Fun!

PT 1: This blog got me thinking about this crew size issue and I've dealt with this subject over the years on this site. NASA seems to think that small crew sizes of 4 - 6 will work for long duration missions. Actually from the engineering and flight perspectives (say to Mars) 4 - 6 is to small. Just to fly there a crew of about 24 is ideal. Staying on station for a full launch window will need probably 48 at a minimum. Luna could make due with a crew of 12 for 3 month rotation cycles since flight can be as short as 3 days.

Pt 2: Mental interaction of crew members needs to be mixed regularly. Social interactions are up to the individuals themselves. Breakdowns (in which there is a isolation of someone for whatever reason) will happen regardless of the numbers. Loners are the biggest threat to a mission success in those conditions. This is a point that tends to not receive much publicity. The hardest part will always be the hardest part. That hardest part is for the individual to step outside their comfort zone and interact collectively with others in their comfort zone. The "I want" is the biggest stumbling block that we all need to overcome. To obtain mental stability in the crew size, participation in another persons comfort zone needs to happen. However with that said, dangerous situations are the exception.

Pt 3: Someones health for example cannot be compromised thus to demand their participation in another persons comfort zone under those/that condition is not acceptable. The key is crew size. Diversity really isn't a factor if everyone is onboard with the life and work style interests. Boredom will lead to creation of new entertainment and social interaction ideas negating necessity of diversity of culture and or interests. Those diversities really would be a great addition to experience and ideally be included.

Yes NASA is having studies done on this issue but my main point is that the crew sizes are to small. A study with those who have been in these studies before can make for a larger study of a 48 size sample. These would simply be "experienced" astronauts flying along side of the "rookie astronauts". The data points on small crew size really only point to individual characteristics. Group characteristics are needed.