Funpost! We both began to giggle like school children

NASA astronaut Scott Tingle launched to the International Space Station six months ago today, on December 17, 2017. Two days later, he wrote a journal entry about his launch experience, and NASA recently posted it online. Out of all the forms of astronaut communication available (memoirs, interviews, tweets, etc.) I think I prefer journals because they are a direct window into what an astronaut was feeling in space. Reading something an astronaut wrote alone in a cramped ISS cubby is about the closest you can get to their actual train of thought.

There are two parts of Scott's journal entry I particularly liked. One is this recollection of what it feels like to ride a Soyuz to orbit:

"But I will add that the second stage cutoff and separation, and ignition of the third stage was very exciting. We were under approximately 4 Gs when the engine cutoff, which gave us a good jolt forward during the deceleration and then a good jolt back into the seat after the third stage ignited. I looked at Anton and we both began to giggle like school children."

YES. This was Scott's first flight, so it's easy to imagine him enjoying the ride. But what's more revealing is that Scott's Russian crewmate and space jam aficionado Anton Shkaplerov is a veteran. It was Anton's third trip to space, and he was FEELIN' IT (not a crime) right there alongside Scott. Spaceflight doesn't get old!

What does 4 Gs feel like, anyway? I started watching some centrifuge training videos on YouTube, and was amazed at the wide variety of reactions people have to getting their bodies owned by physics. Some people handle it well! Others… not so much. Here's my favorite training montage:

If those people are any indication, 4 Gs is not trivial. (By the way, I'd totally be the guy who says "I'M LOSING IT" at 2 Gs.)

Here's my other favorite passage from Scott's journal:

"After exiting the bus at the launch pad, I was fortunate to have the Soyuz chief designer (Roman) and NASA's associate administrator for Human Exploration and Operations (Bill Gerstenmaier) walk me to the stairs and elevator that would take us to the top of the rocket for boarding. The temperature at the pad was approximately -17 degrees centigrade, and we were wearing the Russian Polar Bear suits over our spacesuits in order to stay warm. Walking in these suits is a little hard, and I was happy to have Roman and Bill helping me." 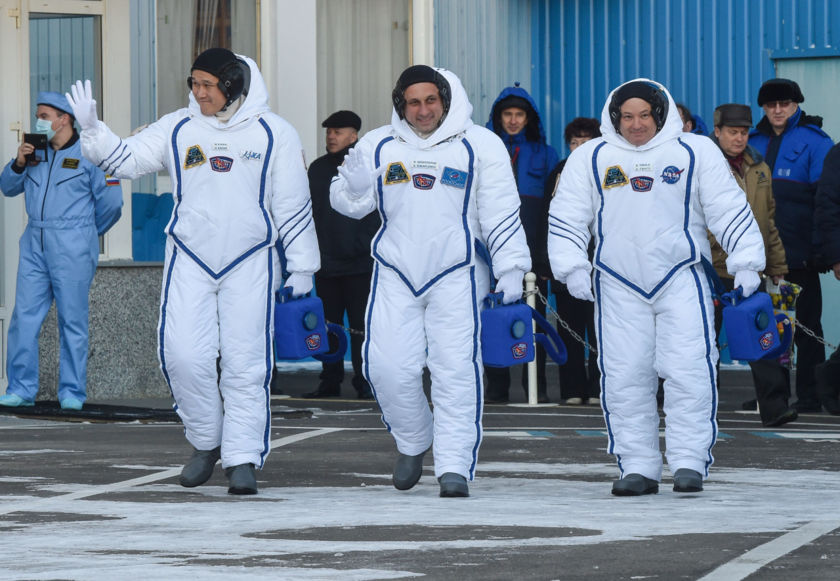 Those polar bear suits are huge! They make the astronauts look like the snowsuited kid from A Christmas Story who whines I CAN'T PUT MY ARMS DOWN. And how about a round of applause for Gerst, with the sub-zero assist! Not only does he go all the way to Kazhakstan to see his NASA astronaut off, he's out there on the launch pad making sure Scott doesn't slip and go rolling across the steppe. I was really hoping to find a picture of that moment, so I trawled through NASA's Expedition 54 image archive. The best I could find is this: 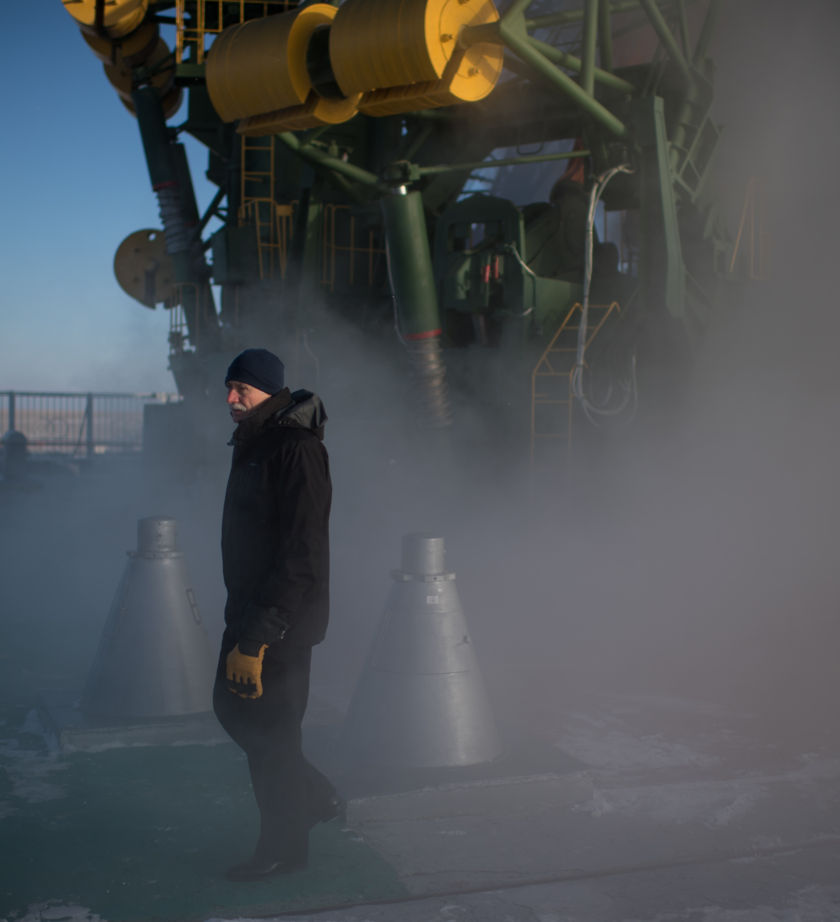 It's a great shot of Gerst, who usually only appears on camera when he's getting yelled at in Congressional hearings. You could totally convince me that's actually a picture of a deep sea ice fisher who just got back to port after a hard day on the boat.