NASA placed its first official order for a SpaceX Crew Dragon to carry astronauts to the International Space Station, the agency announced Friday. The order, currently scheduled to be fulfilled in 2017, would take place after SpaceX completes a series of certification milestones culminating with a crewed flight test to the ISS. But NASA continues to warn U.S. legislators that date could slip if the program does not receive its requested funding levels for fiscal year 2016 and beyond. 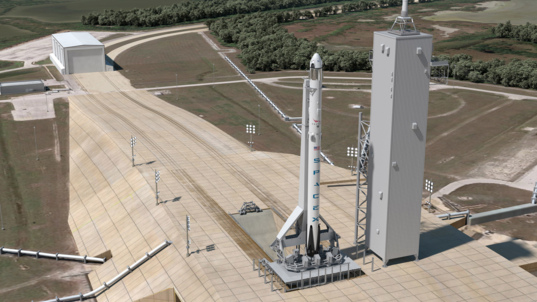 SpaceX Falcon 9 and Crew Dragon on pad 39A

SpaceX's Crew Dragon spacecraft will launch from Kennedy Space Center's pad 39A, which was formerly used for space shuttles.

SpaceX and Boeing have received $2.6 and $4.2 billion awards, respectively, as part of NASA’s Commercial Crew transportation Capability program, CCtCap. Each company is guaranteed at least two and up to six paid crew rotation flights. Boeing received an order last May for its CST-100 Starliner spacecraft. NASA had indicated as early as January that Boeing would receive the first ATP, or Authority To Proceed, because of the longer lead time in booking a launch slot for the CST-100's Atlas V rocket. NASA continues to stress it has not chosen which company will fly to the station first.

As part of the announcement, NASA said again that its commercial crew schedule was subject to congressional funding. "If, however, NASA does not receive the full requested funding for CCtCap contracts in fiscal year 2016 and beyond," read the press release, "the agency will be forced to delay future milestones for both U.S. companies and continue its sole reliance on Russia to transport American astronauts to the space station."

NASA says seats on the Russian Soyuz spacecraft cost $81 million, while the price of flying an astronaut on the Crew Dragon or CST-100 Starliner is lower, at $58 million. NASA asked for $1.24 billion in commercial crew funding as part of its fiscal year 2016 budget request. However, both the House and the Senate offered less than that during the appropriations process. The government is currently operating under a continuing resolution, which funds programs at their fiscal year 2015 levels through mid-December (commercial crew received $805 million last year).

In the meantime, NASA astronauts Doug Hurley, Sunita Williams and Bob Behnken took a trip to SpaceX’s Hawthorne, California headquarters to train inside a Crew Dragon mockup. All three, along with Eric Boe, have been selected as candidates for initial crewed Dragon and CST-100 flights. 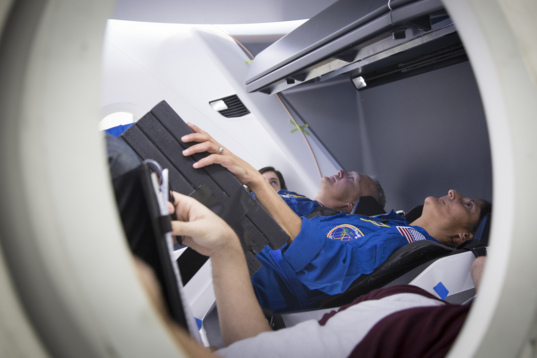 "NASA asked for $1.24 in commercial crew funding as part of its fiscal year 2016 budget request." Well gee, *I* can cover that for them... " However, both the House and the Senate offered less than that during the appropriations process. " Is the budget really that tight in the US government these days? ;) On a more serious note, the interior of the Dragon really is a piece of art. I don't think I've ever before seen such a beautiful spacecraft interior. Musk sure knows aesthetics...

SpaceX is dramatically lowering the cost of spaceflight. You can now fund an entire rocket program for less than the cost of a Starbucks coffee :)

Around 50 years ago I watched like most of us on TV people leaving earth to open up "The new frontier", going to space is dangerous, time consuming, and expensive! But imagine the peoples of antiquity not getting in small hand hue n boats and braving the oceans of earth? I think calling it to expensive is an excuese, and a bad one at that!

I am sorry...in a very constructive way....why don't we post alongside these budgetary numbers, how much was spent on defense interests in the same budget years?