Brother, Can You Spare $1B for a Planetary Space Telescope?

Imagine you had a Hubble-class telescope and could use in any way you wanted to explore planets. What would you do with it?

A number of scientists have had the chance to explore that question courtesy of an American spy agency. A year ago, NASA received a surprise phone call from the National Reconnaissance Agency (NRO), which flies spy satellites, asking if it would like two spare, Hubble-class space telescopes. NASA’s managers said,”Yes!,” and now the agency is looking for the best uses for the telescopes. The highest priority is to see if one telescope could be used to meet the needs for the Wide-Field Infrared Survey Telescope (WFIRST) to study dark energy. That potentially leaves a second telescope for other deep space or solar system studies.

Before I describe the concepts discussed at a recent conference, a truth in advertising statement is required. Each telescope represents $250M worth of hardware. However, not all the systems needed for an actual satellite are included, instruments are not included, and the whole lot would need to be launched. Figures I’ve read suggest that turning each telescope into a working observatory would cost approximately $1B, depending on the specifics of the mission. NASA’s current budgets have no room to fund a single mission, much less two. In a few years, there may be room for a mission or two, so the space agency is soliciting ideas. 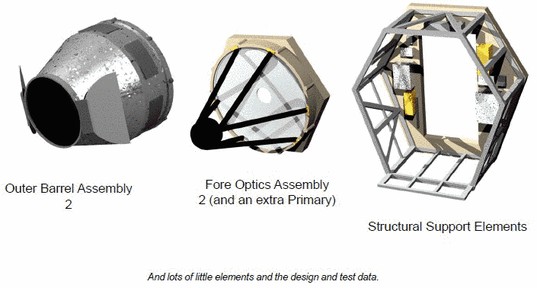 Some assembly required: The hardware provided by NRO

NASA would be required to provide all the additional hardware, launch, and mission operations support to turn the core telescope into a working space telescope. Image from this presentation (PDF).

At the conference, researchers presented ideas for both deep space astronomical targets and a variety of planetary targets. The latter were divided between exploring Mars, monitoring the solar system, and examining any planets orbiting stars in the stellar neighborhood.

The original mission for the telescopes was to take very high resolution images of the Earth’s surface. Two of the proposals would repurpose those terrestrial imaging capabilities to spy the surface of the Red Planet in very high resolution. The Mars Reconnaissance Orbiter’s instruments are the current high resolution champs at Mars with 90 cm resolution for images and 18 m for multi-spectral imaging. By using the NRO’s telescope, those numbers improve to 23 cm and 1 m. A second proposal would improve those numbers to 8 cm and 21 cm. (Those improvements appear to also come in part from more modern instruments as well as the larger telescope.) The high resolution comes with a tradeoff, and only a handful of sites could be studied each day. Depending on the resolution, the images taken would be stripes along the surface less than two or even one kilometer wide.

Comparison of potential capabilities of the NRO telescopes in Mars orbit

Comparison of potential capabilities of the NRO telescopes in Mars orbit for visible camera images and for an imaging spectrometer compared to the capabilities of the currently operating Mars Reconnaissance Orbiters HiRISE camera and CRISM imaging spectrometer. While the NRO telescope would improve resolution, the size of the images would be much smaller (look at the swath widths). From Zachary J. Bailey and colleagues abstract (PDF).

Several of the proposals would keep the telescope near Earth, but would use it to watch the bodies of the solar system. The studies proposed are not that different than what can be done with Hubble today. However, the Hubble telescope spends just a small portion of its time looking at the neighborhood. As one proposal summary states: “The advanced instruments on [Hubble] are rarely trained on solar system targets due to high oversubscription and an increasing focus on deep field observations.”

The solar system watch proposals presented at the conference point out that the instruments proposed would also be useful for deep space studies, the allocation of observing time would be reversed. The telescope’s resolution and would allow it to be a planetary mission to many worlds. Many of the studies would repeat observations over months and years: the change in weather patterns on the gas planets as well as Saturn’s moon Titan; and the evolution of outgassing by comets as they approach and recede from the inner solar system; and volcanism on Io and Enceladus (with searches for volcanism on other worlds). Other observations would study large numbers of asteroids and Kuiper belt objects in the distant solar system to measure their size and composition. Depending on the specific proposal, the instrument complement would include some combination of a camera for high resolution images and/or ultraviolet and near infrared spectrometers for composition measurements.

A number of the proposals would use an NRO telescope to perform long term solar system studies. This image shows Uranus as imaged by the Keck II telescope.

A number of the proposers would look beyond our solar system to study planets orbiting stars in our stellar neighborhood up to 60 light years away. While the specifics of each proposal varied, most proposed would use one or more of three techniques: 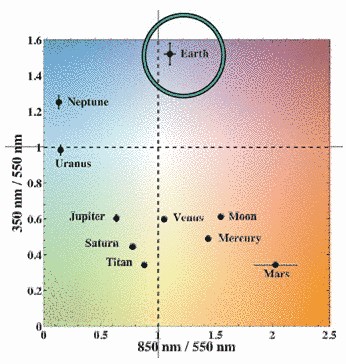 Colors of the Planets

We know so little about planets orbiting other stars that even simple measurements of colors can tell us what type of world they are. In this figure from Timothy A. Livengood's proposal, ratios of colors (indicated by their wavelengths) sort the planets into distinct groups using color information. The Earth, with its water and life, is distinct from the other planets in the solar system.

While this blog is about planetary studies, exciting, potentially ground breaking astronomical missions also were proposed – it is not a given that a mission using the second telescope would have a planetary focus. But if I were to answer my own question about what I would use a Hubble-class telescope for, my first choice would be to study planets around nearby stars. This would be ground breaking research. If the budget and spacecraft capabilities permitted, I’d then add instruments for studying solar system objects and dedicate large blocks of time to solar system studies. (These instruments also could be similar – but with more modern technologies – to those currently on Hubble and therefore would also be useful for continuing Hubble astronomy studies.)

The recently completed conference was intended to look at a wide range of concepts. NASA intends to select six for more in-depth studies. It is likely to have plenty of time to do so. Given current budgets, the second telescope (assuming the first is used for the WFIRST mission) seems unlikely to fly until the mid-2020s, if ever.

Hi, how would the resolution and capabilities change if all three (two NRO and Hubble) telescopes would operate together (forming one larger telescope)? Would it be able to get better pictures of extrasolar planets?

It is not possible for astronomers to combine the data from optical telescopes in orbit, so, alas, that idea won't work.