What's Up in the Winter Sky

The warm days and cool evenings of fall are giving way to cold days and colder nights. For many amateur astronomers, observing during winter is a bit of a challenge - clouds, dew, ice, and of course, the cold. Despite the conditions, braving the elements can be very rewarding. This winter, observers will have many opportunities to see planets, meteor showers, winter constellations, and for many, a lunar eclipse. Here's some highlights for this coming winter. If you need help locating any of the featured objects, consider downloading a copy of Stellarium, a free, open-source planetarium for your personal computer.

Ray is a finalist for a student blogging scholarship! He needs your votes to win it.

December: One of my personal favorite constellations, Orion, starts to rise higher in the eastern sky late in the evening. Jupiter and M31 (Andromeda Galaxy) will be visible high in the night sky. The "summer triangle" of Altair, Deneb, and Vega will be setting low in the western horizon by about 10:00 p.m. On December 10, stargazers in the western United States will be able to catch the lunar eclipse (and full Moon) near moonset, but those in Australia and Asia will be able to view the entire eclipse. A few days later on the 13th, the Geminid meteor shower will be at its peak. Look to the east after midnight in the direction of the constellation Gemini, but a waning gibbous moon may interfere. Don't forget the winter solstice occurs at 05:30 UTC on December 22! 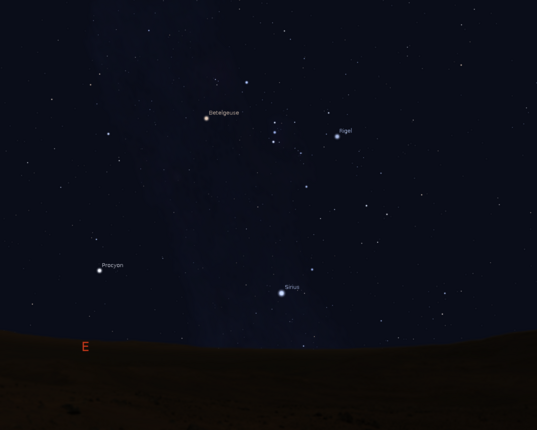 January: The red planet, Mars, becomes visible in the East late at night (after 10:00 p.m.), while Jupiter will be nearly setting the west. Also in early January, the Quadrantids meteor shower will be at its peak. Look to the northeast, a bit above the horizon (after midnight local time) where the constellations Hercules, Boötes, and Draco meet. The Moon will be nearly setting in the west, so conditions will steadily improve through the early morning. Lunar observers will have a full Moon to observe on the 9th, and for those who enjoy darker skies, the Moon will be in its new phase on the 23rd. 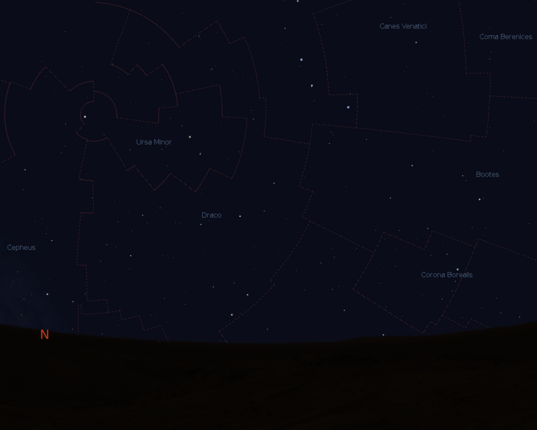 February: Leap Year! One extra night of observing! This month would be a good time to start looking for new eyepieces or to put away some money for spring/summer gear, as there's not much for special events this month. If you haven't watched the International Space Station pass over your area, you could visit heavens-above.com to get flyover times, or if you use Twitter, just follow @twisst. Fans of lunar observation will enjoy a full moon on February 7, and the Moon will be at its new phase on the 21st.

That's it for this set of winter observing highlights, but spring will bring with it some great viewing treats, including Saturn's return to the night skies, more meteor showers and a solar eclipse! Viewers can also look forward to not just one, but two planetary oppositions and a conjunction. You can look forward to a full spring guide to observing next year. Remember, keep looking up!

About the author: Ray Sanders studies astrophysics at Arizona State University. He is currently researching variable stars, and is a founding member of ASU's "Astro Devils" Astronomy Club. In his spare time, he enjoys writing articles for The Planetary Society Blog, his astronomy outreach project Dear Astronomer, and Universe Today. Ray is also a finalist for a student blogging scholarship! But he needs your votes. Take a minute and vote for him here!