Who is the photographer behind Mars rover photos? Answer from Jim Bell

Editor's note: This is the second of a pair of guest blogs from two Mars imaging scientists about how Mars photographs get made. I received an email from Miguel Santesmases, a Spanish fine arts student, asking: "Who is operating [the rover] cameras, who shoots the trigger, who directs them to a precise object or mountain, how is all this done? I have been searching the web but it is as if the cameras shoot by themselves, the dream of the old days of photography, the picture made by itself, but I know it has to be someone there, or a team of photographers." I forwarded his question to two Martian camera operators, Mark Lemmon and Jim Bell. Here is Jim's response, which is excerpted from his excellent book on the subject, Postcards from Mars: The First Photographer on the Red Planet

Panoramic view of Clovis outcrop with Gusev basin behind, sol 210

Spirit spent her first Martian winter studying rocks near the summit of the "West Spur" on the flank of the Columbia hills. The outcrop in the foreground is Clovis. In the background is the floor of Gusev crater, where Spirit landed. The relatively clear air permits a view of the lumpy distant rim of Gusev.

While we have not been the first team of scientists to explore the surface of Mars, I believe we have had the privilege of being the first to see the place in what is an ultimately more human way. The difference between the views of Mars from earlier missions and the views from Spirit and Opportunity is like the difference between "acquiring images" and "taking photographs".

"Acquiring images" is a technical, science-driven, resource-limited activity on space missions. It is based on the premise that every mission to a new place, whether human or robotic, has to carry a camera. These cameras must document the place to allow scientists and engineers to run missions and to make discoveries. But it's not easy to acquire space images or to send them home. Spacecraft and instruments are complex, sometimes finicky things to operate, and time to take pictures is often a scarce commodity that has to be shared among many different instruments and interests. Even more scarce, usually, is the bandwidth necessary to transmit high quality pictures back home from outer space.

Those of us "taking photographs" with the Mars rovers, on the other hand, have had the luxury of much more time devoted to picture taking than previous missions, much more bandwidth for sending pictures back to Earth, and better resolution (the ability to make out fine detail) of our cameras compared to any previous Mars missions. These advantages have allowed us (not all the time, but more often than our predecessors) to think and act like real photographers -- artists -- while at the same time gathering all of the required scientific and engineering information needed to run the missions.

When designing a camera sequence for the Pancams (the pair of panoramic color cameras on the mast of both Rovers), for example, I sometimes have the luxury to think about the same kinds of issues that landscape photographers consider in their quest to capture the spirit and stories of the land. Does this photograph have the potential to be particularly evocative, historic, or artistic? How can we frame this particular shot? Can we include some foreground rocks or rover parts in the image to give the view a sense of depth? What is the balance of sky and ground? Do we view the scene in natural light or with enhancing filters? And how do I interpret the view later, in the computer "darkroom" where I process the images? The relation to reality that all art must bear is a particularly strange one for this project. It is not abstract art, but it also isn't a reality that any human has quite witnessed yet. 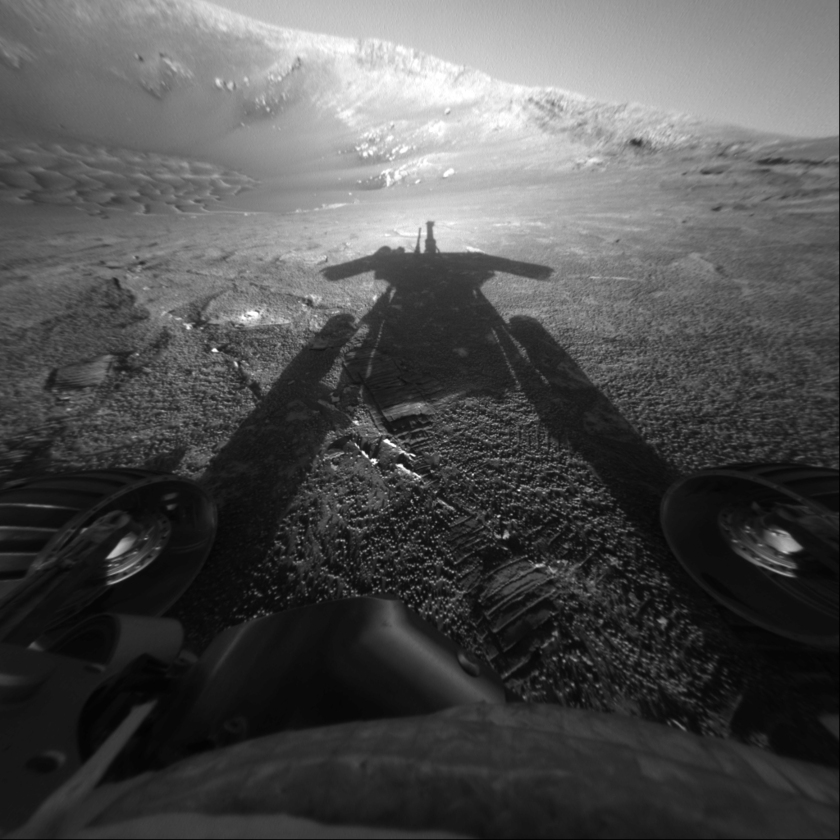 As Opportunity stood on the rim of Endurance crater on sol 180 (July 27, 2004), the mission timed a Hazcam photo to catch the rover's shadow stretching deep into the crater's interior.

My goal in pulling together collections of images from the rovers has been to share the beauty, desolation, grandeur, and sometimes plain old alien strangeness of the Mars that has been revealed to us through the cameras. Many of these images are, I believe, the closest representations yet made of what it must be like to be there, standing on Mars. Of course, I've been fortunate to have had a lot of help with that work from the incredibly talented and creative people on the rover team.

Thanks for the interesting perspective. I never looked at it this way as you do. That is a good perspective to have. It can bring about a 2nd 'science look' inspiration burst also.