My entire science-writing career has focused on our solar system, and understandably I find myself drawn to anything having to do with planets. From Armageddon and Deep Impact to Sun-and-Moon coffee mugs, I'm into it.

So imagine my surprise, a few years ago, when I was going through airport security in Los Angeles and looked down to see a 3-foot-wide Saturn embedded in the floor -- and it was backlit! The planet's disk sat astride a line representing its orbit. Was this part of a whole solar system, I wondered? Sure enough, looking around I saw nested circles for Jupiter, Mars, and so on.

Now, I suspect we've all seen models of the solar system in all kinds of places, but I really wasn't prepared to be standing on a glowing visage of Saturn while some TSA guard was about to check out my toiletries. I quickly bootlegged a photo of the ringed planet before shuffling over to the X-ray machines. After passing through security, I looked back to spot a nice lineup of lunar phases. 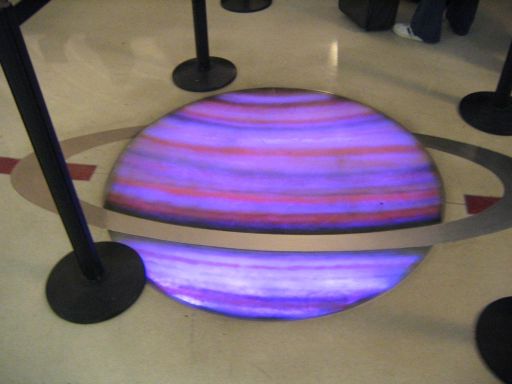 representation of Saturn in the security area of Terminal 4 at Los Angeles International Airport.
The past few days I've been consumed with learning more about this curious public planet parade. It's in Terminal 4 at LAX, the domain of American Airlines. So, naturally, I called AA's media-relations department for the inside scoop. "Planets? In the floor?" No one had a clue.

My next stop was the PR department for the airport itself. I spoke to media rep Marshall Lowe, who confessed he knew nothing of the artwork but would look into it. The next day Lowe called to say he'd seen the installation and would try to dig up some information for me.

Another day passed, with no further word from Lowe.

So today I started poking around the Internet -- isn't that what journalists are supposed to do? First, I learned that the podiatric planets must have appeared as part of a massive four-year, $300-million renovation that American Airlines completed in 2002. 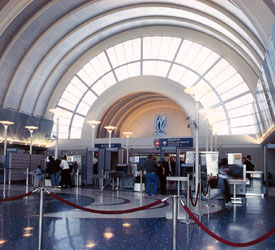 "Hmm," I thought. "What strange wording." It turns out that not everyone was thrilled with Narduli's work -- particularly her depictions of a series of nude men attempting to take wing.

y calls to Narduli's LA studio went unanswered -- it's a holiday weekend, after all. So I hope to have more to report (and some better pictures) in a few days.