On June 30, one week after entering lunar orbit, the Lunar Reconnaissance Orbiter turned on its LROC camera and began taking images of the Moon. The first ones were taken along the termination line, showing a hilly region a few kilometers east of Hell E crater in the southern hemisphere, south of Mare Nubium.

LROC, which stands for the Lunar Reconnaissance Orbiter Camera, is in fact composed of of two instruments: a low-resolution wide-angle camera and a high-resolution narrow-angle camera. Both came online on June 30, and LRO's other six instruments are also in the process of being activated. Once the instruments are calibrated, the spacecraft will move from its current commissioning orbit to its near-circular primary orbit, 50 kilometers above the lunar surface. 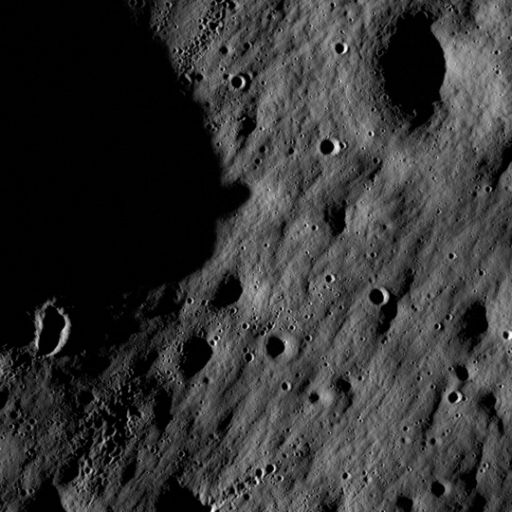 n June 30, 2009, the Lunar Reconnaissance Orbiter switched on its cameras and began images of the lunar surface. The early images were taken along the terminator line separating the day and night sides of the Moon. THis image shows a hilly terrain a few kilometers east of Hell E crater, south of Mare Nubium.