The Enigma of Enceladus

This week we celebrate a milestone in the annals of planetary exploration:Five years ago, on July 1, 2004, the Cassini orbiter slipped between the tenuous F and G rings of Saturn and settled into orbit around that famously ringed planet. Little did we know at the time all the wondrous views this enduring craft would return. At last count, NASA has released nearly 1,800 images of the Saturnian system &mdash and that's just from the craft's Imaging Science Subsystem, its visible-light camera.

Someday there'll be entire books dedicated to everything that Cassini (and its sidekick Huygens, the European-built Titan probe) has discovered over the years. But even now, with the mission not nearly over, few planetary scientists would dispute that any Top Ten discovery list would surely include the image below. 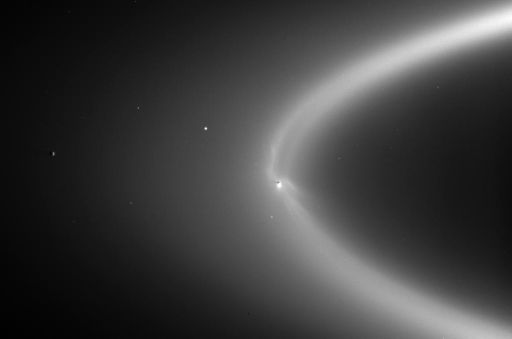 Cassini image taken in September 2006 revealed an amazing sight: Wispy fingers of bright, icy material extending thousands of miles from Saturn's moon Enceladus and into the E ring.
he center of attention here isn't Saturn's faint E ring, first spotted telescopically from Earth in 1967, but rather the modest moon Enceladus that's in the center of the frame. Astronomers had long known that the E ring overlaps the moon's orbit, and they suspected a connection. Not long after Cassini arrived, its camera revealed that powerful eruptions near the south pole of Enceladus are spewing a constant stream of water vapor and ice particles into space. Spread that out, and you've got the E ring. Amazing stuff!

William Herschel discovered this moon in 1789. He named it Enceladus, after one of the Gigantes in Greek mythology. These enormous children of Gaia had, among other things, long serpentlike lower limbs. Hmm... how did Herschel know that the name Enceladus would prove so fitting? 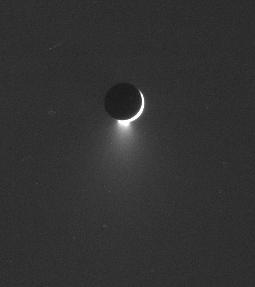 n August 2006, Cassini imaging scientists were astonished to see that Enceladus is very active -- with towering jets of water vapor and ice particles spewing from near its south pole.
ind you, Enceladus was considered odd even before Cassini arrived. Some 30 years ago, Voyagers 1 and 2 found that its surface is virtually 100% reflective and nearly pure water ice. This moon averages only 313 miles (505 km) across &mdash; it's only 4% the diameter of Earth and has just 0.00002 as much mass. So how could an ice ball no larger than the British Isles be so active? What's going on inside it?

But first, here's some useful background: An orbital resonance with nearby Dione forces Enceladus into a very slightly elliptical orbit. This, in turn, means Enceladus can't keep exactly the same hemisphere pointing toward Saturn; from the planet's perspective, the moon nods slightly side to side. The upshot is that Enceladus's icy crust flexes rhythmically during each orbit, causing frictional heat to build up inside. All that bumping and grinding is generating about 1015 ergs per second &mdash; equivalent to more than 100,000 hair dryers set on "high"! On paper, that's enough heat to create a subsurface ocean of global extent, the "lubricant" that decouples the flexing crust from the moon's deeper interior.

So what's this ocean like, and what's it got to do with all that south-polar spewing? Porco and her team proposed the jets must be powered by a not-very-deep reservoir of liquid water that boils spontaneously and violently once it finds a way to reach the the vacuum of space. These escape hatches are provided by four 80-mile-long cracks (dubbed "tiger stripes" but officially designated sulci) near the south pole. 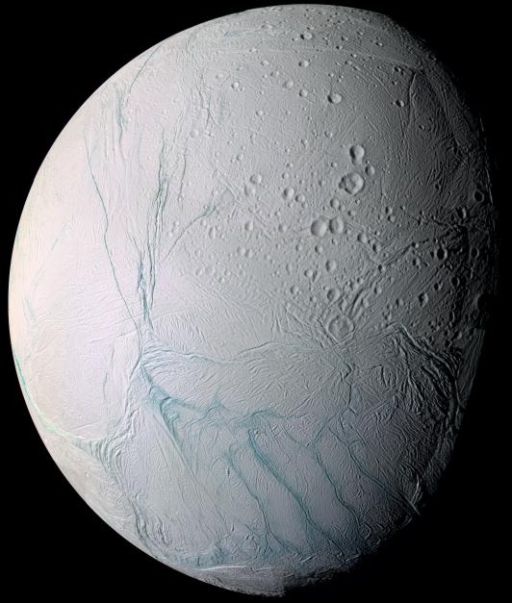 n this false-color Cassini view of Enceladus, compare the relatively ancient cratered terrain near its north pole and the quartet of fresh fractures (dubbed "tiger stripes") in the south. Their blue tint indicates an icy surface covered with coarse grains and boulders. 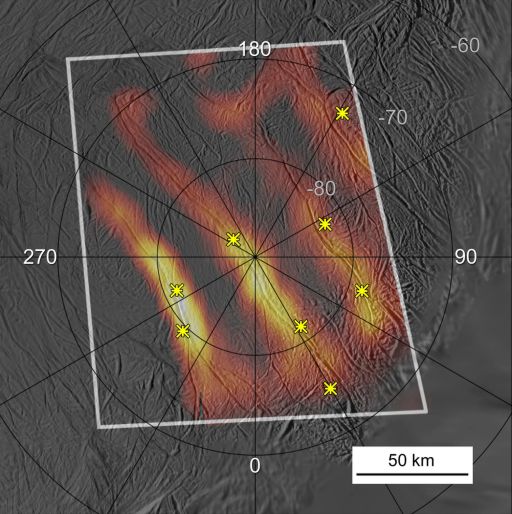 hermal maps from Cassini's Composite Infrared Spectrometer reveal heat escaping along the four sulci (dubbed "tiger stripes") near the south pole of Enceladus. The hottest location, at lower left along Damascus Sulcus, registers 180 kelvins (-135 F). Yellow stars mark the locations of the moon's dramatic jets.
ot everyone agrees with this "Cold Faithful" model. Others (most notably University of Illinois geologist Susan Kieffer) speculate that an ocean might not be needed at all. Instead, frozen compounds called clathrates, which lock up volatile molecules like methane, carbon dioxide, or nitrogen in water-ice crystals, could be decomposing to create the jets of gas and ice.

A few weeks ago I attended a meeting of geophysicists in Toronto, which included a session titled the "Great Enceladus Debates". It was an apt choice; to be perfectly honest, there is much disagreement about the moon's inner workings. At the meeting, James Roberts (Applied Physics Laboratory) explained there almost has to be a layer of liquid water down there somewhere &mdash; it's the only physically plausible way to channel so much heat out of the interior. But right now the orbit of Enceladus isn't nearly elliptical enough (by at least a factor of three) to sustain all that tidal friction indefinitely. However the subsurface ocean came to exist, Roberts says, it's likely to freeze quickly on a geological timescale.

Fortunately, Cassini has been getting quite close to Enceladus recently. The craft brushed past the moon four times last year, and two more close flybys are planned for November 2nd and 21st. (Another dozen could occur if NASA approves a proposed 7-year extension to the mission.)

Two new results, discussed in Toronto and published last week in Nature, put important constraints on the putative ocean. According to Frank Postberg (Max Planck Institute for Nuclear Physics) and others, about 6% of the tiny E-ring particles swept up by Cassini's Cosmic Dust Analyzer are quite salty. They contain up to 1.5% sodium chloride (NaCl), about half the salt content of terrestrial seawater. So, the thinking goes, any liquid water inside Enceladus must have been in contact with deep-seated rocks for a long time &mdash; millions of years &mdash; to allow sodium and other elements to leach into the water.

But something else, published in the same issue of Nature, is at odds with the CDA results. Nicholas Schneider (University of Colorado) led a group of observers who used telescopes on Earth to search for sodium in the escaping plumes spectroscopically. They turned up nothing, not even a trace, even though atomic sodium has very strong emissions in yellow light. Schneider says that the lack of sodium in the plumes' vapor rules out the violent geyser model proposed by Porco's team, because if briny water were boiling explosively, both the gas and particles should contain salt. 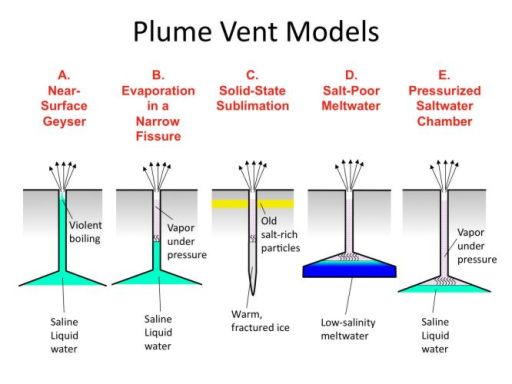 everal mechanisms could be driving the powerful jets of water vapor and ice particles coming from Saturn's moon Enceladus.
Several researchers now think it's more plausible that the gas is slowly evaporating in deep caverns below the surface &mdash; just like water escaping as vapor from the top of Earth's oceans. The gas collects in pressurized pockets until it can escape to space through fissures. "There's no debate over the ocean, only the source of the plumes," Schneider said in Toronto. And other explanations are still possible; clathrate-rich ice isn't out of the question, nor is melting caused by slabs of deep-seated ice rubbing against each other.

Meanwhile, all this talk of warm saltwater has really gotten the attention of astrobiologists. Enceladus appears to have a sustained source of heat, a suitable chemical mix, and liquid water. Throw in a subterranean environment protected from space radiation, and you've got what might be just the kind of place that's conducive to life.