Images from final phases of Kaguya 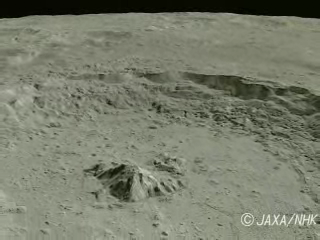 aguya captured this image of the Moon's Tycho crater seen from 30 km above the surface.
amed after the Lunar princes of Japanese favorite folklore, Kaguya had circled the Moon since October 2007. Her operation ended on June 10, 2009 with a controlled crash to the designated area.

The flash of the collision was observed by Anglo-Australian Observatory.

One is the crater Anaxagoras seen from 58 km above the surface.

Note the feature of the crater wall, which seem to have collapsed into several pieces.

The other is Gill crater, near where Kaguya crashed, seen 39 to 44 km above the surface.

Kaguya's original orbit was about 100 km. JAXA lowered her orbit in February 2009 for closer observation of the Moon.

NHK, Japan Broadcasting Corporation, who provided the high definition camera onboard Kaguya, featured a documentary program of new findings on the Moon tonight.

5thstar is a webmaster of a group of people who were the semi-final applicants in NASDA's 1995 astronaut selection. (The National Space Development Agency of Japan or NASDA was merged with two other space agencies to become the Japan Aerospace Exploration Agency or JAXA in 2003.) Going through medical checks and interviews for an incredible week, those forty-some wannabes were tied with a unique bond of friendship. 5thstar reapplied in 1998, and became one of the eight finalists to experience an extensive psychological group survey in NASDA's isolation chamber for a week. The finalists were also interviewed by honorable astronauts at NASA Johnson Space Center in Houston, Texas. He maintains a private blog to advocate space exploration, where he posted English translations of media briefings by JAXA about MUSES-C, a.k.a. Hayabusa, when it touched down on asteroid Itokawa.