Preparations for the ExoMars rover mission are in their final stages. ESA made two announcements today: ExoMars Trace Gas Orbiter is shifting orbit, and they officially opened a new Rover Operations Control Centre (ROCC) in Turin, Italy. ROCC will support the Rosalind Franklin rover’s deployment from the Kazachok lander and surface operations after that. Along with the announcements they posted some cool images. The mission is proceeding toward a July 2020 launch and March 2021 landing. 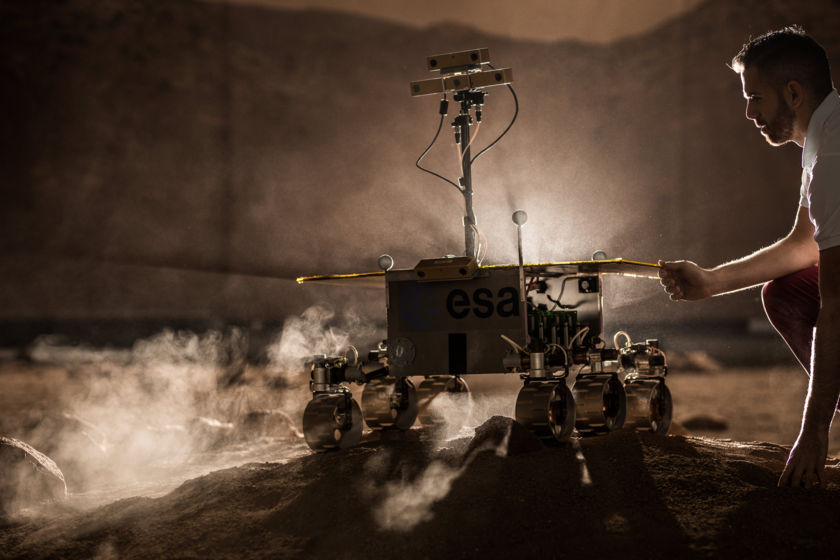 This is a scaled-down model of the ExoMars rover. The flight rover has wheels 25 centimeters in diameter.

ExoMars Trace Gas Orbiter has had a productive science mission so far (finding no methane, which is a puzzle). If the rover lands successfully, the orbiter is going to take on a second job: rover data relay. To prepare for that work, ExoMars TGO will make a subtle change to its orbit on 15 June that will place it on course to be in the right place at the right time to relay the arriving rover’s telemetry to Earth. In the meantime, ExoMars TGO is performing regular tests of rover relay with Curiosity, giving ESA controllers valuable experience, and NASA scientists more data return. NASA provided its Electra relay radio packages to ESA to make all this as seamless as possible.

Meanwhile, the new Rover Operations Control Centre is a huge sandbox (dirtbox?) for engineers to play in. It's much like the In Situ Instrument Laboratory at the Jet Propulsion Laboratory where I’ve seen engineers work with models of Curiosity, the Mars Exploration Rovers, and InSight. I assume that when they're actually using it for testing they don't light it quite so dramatically! 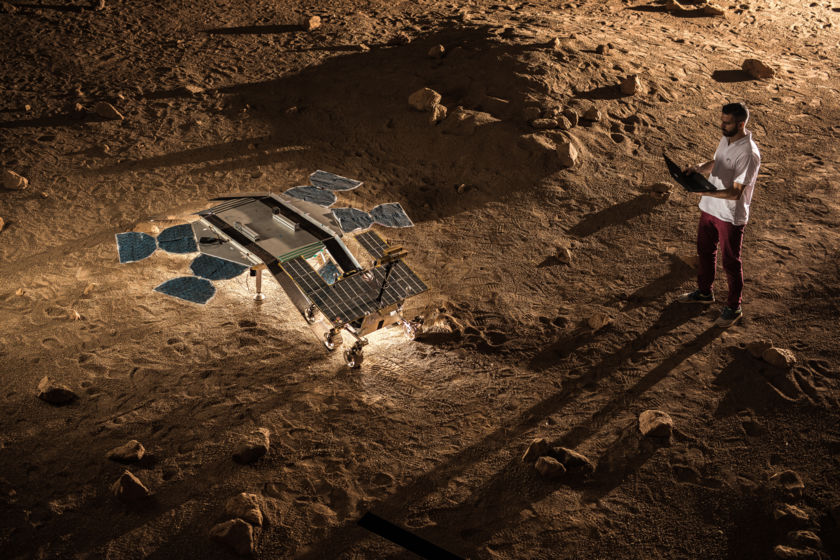 Both the test rover and the lander are scaled down from the flight model.

There are multiple models of the rovers of different sizes being tested at ROCC. The model ExoMars rovers, also called breadboard rovers, are named Bridget (the earliest developed), Bruno (the full-scale, full-mass, most-like-flight model, like Curiosity’s MAGGIE), and Bryan (the full-scale, stripped-down, mass-scaled-to-Mars-gravity model, like Curiosity’s Scarecrow). The rover shown in these pictures is reduced-scale (half-scale, I think?) and doesn’t match the photos I can find of Bridget, so may be another model specifically for egress testing.

In addition to the Mars Yard, ROCC has another really cool test platform: a second sandbox, 8 meters square, that is mounted on a tiltable table. The table can tilt up to 30 degrees, allowing engineers to test rover mobility in a continuous range of conditions. I’ll bet JPL wishes they had one of these. See it at work in this video:

Please accept marketing-cookies to listen to this podcast.

Meanwhile, the actual flight rover is proceeding through its tests. Science instruments are going through thermal vacuum testing, making sure they’re ready to endure the rigors of launch, cruise, landing, and life on Mars.

I like the flexible wheels. The larger contact area means lower ground pressure from the rover so its less likely to sink in and get stuck. We'll see (hopefully) how well it performs on Mars!

Thanks for the video and the insight to the Mars rover 2020 to come. May the helicopter do just as well too. More over may the budget be there for up coming missions in the works, as is being plan.

As of today (22 July 2019), ESA reported their Radio Science experiment equipment has passed its testing and will be sent to Russia for acceptance testing. It is still on track to launch around this time next year per ESA.