Ten years ago today, I was in Florida, celebrating with the Mars Exploration Rover science team the successful launch of the first of the twin rovers to Mars. It was one of the most exciting experiences of my life; I'll never forget it. I filed the story below that evening, one of the earliest articles I wrote for planetary.org.

At noon on Tuesday, June 10, the crowd started to form at Gate 1 to the Canaveral Air Force Base. In addition to four local television stations' broadcast vans and a rented truck containing an IMAX film crew, a gaggle of several dozen visiting members of the press queued up in the hopes of finally -- after two days of delay -- being issued their media badges and granted permission to enter the base and set up their cameras at the press site.

Among the newspaper, TV, and wire reporters were a few ringers: Mars Exploration Rover mission scientist Jim Rice had gained his press pass by offering to write an article for the Arizona Sentinel, and about ten other scientists had otherwise scammed their way into the press site, hoping to catch a coveted close view of the rocket blasting their instruments to Mars. I was there too, to watch the launch of Biff Starling, the Astrobot, and four million names of Mars enthusiasts around the world, stored on The Planetary Society's Red Rover Goes to Mars DVD assembly on the spacecraft.

At 12:30, the Air Force staffers who'd issued us our media badges called us back to their van. For a moment it seemed a repeat of Sunday's launch scrub. But they'd only called us up to tell us that we couldn't be taken to the regular press site, as the wind had shifted around to come off the water and would carry a toxic plume of exhaust from the rocket dangerously close to the onlookers. We'd be taken instead to a high dirt berm to the south of the pad. "Let's get goin'," the Air Force staffer said, "I want to get y'all out there. Wire first, then TV and the IMAX truck, then everybody else."

We all scooted for our cars and formed a long convoy of 40 vehicles, and within minutes we'd passed security and had all parked atop the berm. From there we could look out across forest unevenly punctuated by unlabeled and secret-looking Air Force buildings to the twin gantries of the Delta launch pads -- and the MER A launch vehicle on the horizon, from which a plume of pure white vapor emanated slowly. To the east was an unbroken view of ocean and surf, and a welcome breeze blew in off the ocean. The breeze not only kept us from sweltering, it was keeping at bay the cumulus clouds that -- as they had for the last week -- threatened from the west. But the weather was decidedly different today, with the cumulus clouds capped at a low altitude, and thin high clouds forming a haze above us. The Air Force staffer who'd issued me my badge earlier had told me confidently that we'd launch today, and I hoped he was right.

The Boeing Delta II rocket on the horizon

Inset: a closeup of the rocket showing the vapor plume.

Within minutes the press had staked out positions with their tripods on the northern rim of the berm, leaving a large gap so that the mobile tracking station could have an unobstructed view. The science team members present quickly took up their position between Channel 9 News and Solar System Ambassador Robert Gass, who told us about all of the different launch pads, gantries, rockets, and buildings that we could see poking up from the forest out to the horizon. 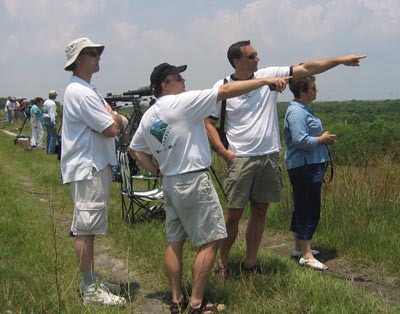 John Grant, co-chair of the MER Landing Site Steering Committee, and Jim Rice, one of the Mini-TES instrument science team from ASU, point to the spacecraft over the head of Sheri Klug, director of the ASU Mars K-12 education program, while Jim Bell, developer of the rover's cameras at Cornell University, looks on

As we nervously looked at the sky, we wished for the NASA feed that would have given us up-to-the-second status reports on the mission, but the swarm of press around us kept well informed. "Range is green!" a TV reporter shouted, meaning that no boat or airplane traffic was within the launch range -- another critical milestone cleared. The scientists got more keyed up. Jim Bell, the Cornell University researcher who developed the camera instruments for the rovers, grew steadily quieter, and he began to pace back and forth. "How's it going, Jimbo?" Greg Mehall asked him, to which Bell replied, "I gotta keep walking around or I'll throw up." This was Bell's first launch in which his own instruments -- his babies -- were mounted on a spacecraft at the tip of a giant rocket. He'd done all he could do to get his instruments ready for Mars; now his professional life was in the hands of strangers, the Boeing Delta team who had built the rocket.

As Mike Malin tried (without success) to counsel Bell to "relax and enjoy the ride," another group of observers showed up, including Matt Golombek, whose barely contained energy raised the excitement among the gathered scientists another notch. Golombek commiserated with Bell. "That's how I felt on Pathfinder," he said. Bell could only reply "I hope it works."

"We've entered the T-4 hold," announced Malin, who had synchronized his watch with the launch clocks. Mehall shot videos like any other Florida tourist. Cathy Weitz and then Golombek were grabbed by the Channel 9 News crew to shoot interviews. The plume of vapor disappeared. Bell paced, taking little sips of water. Golombek returned from his interview, bouncing up and down on his toes. The reporters buzzed about their tripods.

The Boeing Delta II rocket on the horizon

"Four minutes and counting!" called Malin. The scientists crowded the edge of the berm, cameras out. "Two minutes!" I fumbled with my two cameras, wishing I had four hands. "Ninety seconds!" "Sixty!" "Ten!" Malin called. Voices suddenly came in on the countdown--the scientists and many of the reporters--

Smoke billowed and flames sprouted from the base of the rocket, and the cheering began before the sound had even reached us from the pad. The ten-story rocket lifted strongly to the yells of scientists:

The rocket arced slightly toward us and out over the ocean, looking exactly like a rocket should, riding into the air on a thick plume of white smoke. Amidst the cheering someone shouted "the solids lit!" and the cheering started all over again. In moments, the rocket was gone, and the smoke plume vanishing. Scientists turned from the sky to hug each other. Weitz was pulled aside again by Channel 9 to give a post launch interview, which was periodically interrupted by yelling and screaming from the rest of the scientists. The TV cameras were taken off the tripods and turned onto the celebrants. Weitz returned from her interview, saying "they asked me how I feel about the successful launch. What do they expect me to say? 'I'm really disappointed?'" I congratulated Bell on the successful launch of his hardware. "Hey, congratulations to you," he said. "You've got hardware on this spacecraft too." 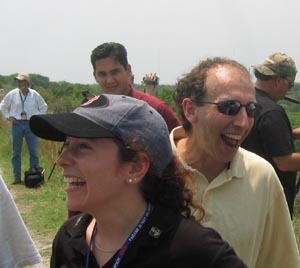 Cathy Weitz is NASA Program Scientist for MER and Mars Express, and Matt Golombek was chair of the MER landing site steering committee.

With the spacecraft on its way and the reporters quickly dissipating to file their stories, the scientists organized themselves and headed to a Tiki bar on the shore to celebrate. Weitz kept receiving phone calls from the operations center with good news: perfect third stage ignition, and later payload separation, a so far flawless mission. In the midst of conversation Golombek would drum his hands on the table, endangering people's beers, repeating "We're going to Mars!" And every once in a while I would think of the spacecraft -- gone now from Earth, and still moving, very fast.

Finally, at 3:22, Weitz got the call we'd all been waiting for: "We got signal from the spacecraft," she told us. "Perfect two-way communication." Everyone toasted that announcement. Bell was smiling, finally able to relax.

By that time, though, the thrill of the successful launch was wearing off for the scientists who'd done this before, particularly Christensen and Golombek. "Now the work begins," Christensen said, "and we're scared." An unimaginable amount of work lies before them between now and landing. Mountains of calibration data await; these data must be carefully analyzed so that scientists will be able to understand what they see on the surface of Mars. Software for the rover is behind schedule and must be developed, tested, and tweaked. There will be many weeklong "Operational Readiness Tests," or ORTs, in which the scientists, engineers, and mission operators participate in elaborate simulations of mission operations so that they can fine-tune the details of how a team of hundreds of people will be able to make the most of one rover on a distant planet. And Mars Global Surveyor and Odyssey are still returning gigabytes of data in the form of images of the landing sites, which must be analyzed so that the scientists can be ready to test hypotheses with the rovers once they land. 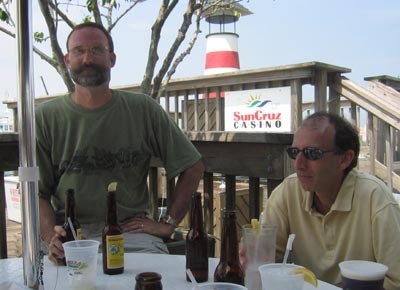 Phil Christensen, principal investigator for the Mini-TES instrument on MER, and Matt Golombek think about the future.

All of the scientists present were a little jealous of the launch team, whose work had just ended with the successful firing of the third stage of the rocket. Now the mission team's work really begins, and once the spacecraft lands, the schedule will be grueling. The spacecraft will be operated on Mars time, which is not in synch with Pasadena time, and every day of the spacecraft's life the scientists will have just three hours to evaluate an entire day's worth of data, then meet and develop a consensus about what to do next. Consensus building among typically strong-willed scientists and safety-minded engineers is not easy under normal circumstances; sleep deprivation and the demanding schedule increase the challenge to a level that quelled Christensen and Golombek's elation for the moment.

"We're people-limited," Golombek explained. "At some point in the mission there's going to be a revolt against the schedule. And when the revolt happens you can't bring in a new team of rover drivers, they're the only rover drivers there are." However, while the anticipation of the operational mission had them scared, they were not so scared that they won't accept the challenge. "It'll be a wild ride," Golombek said, laughing.

Christensen certainly wouldn't give up space exploration. I asked the two researchers whether they would go to Mars. Golombek declined, saying that there must be something genetic that makes people crazy enough to want to go into space. But Christensen would go. "What if you couldn't come back?" I asked him. He replied that he'd only go if he wasn't going to come back. "The 49ers who came to California -- the people who came on ships to the New World -- they knew they weren't coming back home," he said. And just as we honor those pioneers now, Christensen thinks that, two hundred years from now, humans will look back on this decade's fusillade of missions to Mars as one of the first steps in the exploration of the Martian frontier. Today we successfully launched another ship. And it's still moving, flying toward Mars.

Congratulations to all of the thousands of scientists and engineers who were responsible for yesterday's successful launch, and best wishes for a long and productive surface mission.

What a great 10 years she delivered!