What's up in the solar system in November 2011

For a few weeks over November and December, a rare launch window to Mars opens, and then slams shut agin. Mars launch windows only happen once each 26 months, so if you miss the window, you have to wait more than two years for the next one. That happened to both of the Mars-bound spacecraft that are gearing up for launch this month, so the stakes are high. The first scheduled to launch is Russia's Phobos-Grunt, currently planned for launch on November 8, 2011, at 20:16 UTC (00:16 November 9, Moscow time, or 2:16 a.m. at the launch site in Baikonur, or 12:16 Nov. 8 here in Los Angeles). That window is open through November 25. The second scheduled to launch is NASA's Curiosity rover, with launch currently scheduled for November 25, 2011, at 15:21 UTC (10:21 local time at Kennedy, 7:21 for me). That window is open until December 18. The slightly different dates of the launch windows result from very slight differences in the trajectories that the spacecraft will fly. I am kind of dreading these launches, because, as I've heard one rocketeer say, a thousand things could happen during a launch, and only one of them is good.

The other big event to take note of is the last of three close flybys of Enceladus by Cassini, which happens on November 6. This one is really unusual because it won't be the cameras or the particle-sniffing instruments that will control which direction Cassini is pointing; it will be the RADAR instrument, and they'll be performing the same kind of SAR imaging on Enceladus that they usually do on Titan. 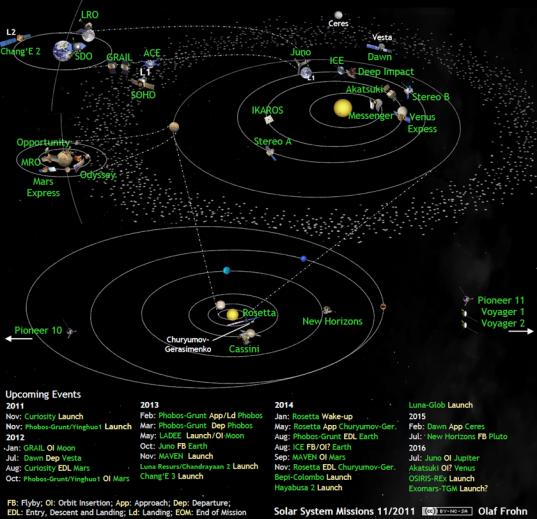 Phobos-Grunt and Yinghuo-1 are undergoing final preparations, having been shipped to the Baikonur launch site last month. According to a Roscosmos news post the spacecraft is now being fueled and is readying for launch at 00:16 Moscow time on November 9. (Google Translate renders the news item quaintly, saying the spacecraft is "at the gas station." It also, incorrectly, translates the time as "00:16 GMT," but the original clearly says 00:16 ???, Moscow Standard Time.) Phobos-Grunt will enter Mars orbit in September or October of 2012, then send Yinghuo-1 on its way on a Deimos-crossing, elliptical, equatorial orbit. Phobos-Grunt will land on Phobos in February or March 2013, and lift off from Phobos a few weeks after, returning to Earth in August 2014. Inside the Phobos sample return capsule is a canister containing the Planetary Society's Phobos LIFE experiment.

NASA's next great rover Curiosity, or Mars Science Laboratory, is scheduled for launch no earlier than November 25 and will land in August 2012. Its nominal mission will last one year but it should go on much longer. There is finally a dedicated MSL section of the Kennedy media gallery, and the latest images show that the spacecraft is now fully assembled: cruise stage, backshell, descent stage, and heat shield now make a protective sandwich around the rover. And today, it's being encased in its fairing. Curiosity will be landing in Gale crater on August 6, 2012, just after 5:00 UTC (August 5, after 10:00 p.m. here in Los Angeles). On Mars, it will be in the midafternoon of a late winter day in the southern hemisphere at the landing site at 4.49°S, 137.42°E.

NASA's MESSENGER team was busy last month, with the publication of a special issue of Science containing several papers representing the first science from Mercury orbit. Watch their gallery for regular image releases, like these recent ones showing Mercury's very dark south and north polar regions.

ESA's Venus Express remains in orbit on a mission that has been extended through 2014. There were several papers presented (scroll down to the Thursday session) at the DPS/EPSC meeting last month about Venus Express' long-term monitoring of Venus' atmosphere, including one about how the spacecraft has observed an ozone layer at Venus.

The twin spacecraft of NASA's GRAIL mission launched successfully on September 10. They're now cruising to the Moon; GRAIL-A will arrive on December 31, 2011, and GRAIL-B on January 1, 2012. Their mission to map the Moon's gravity field will last for only 82 days. The mission is looking for new names for the two spacecraft, and has invited American students in grades K-12 to enter a naming contest.

China's Chang'E 2 lunar orbiter is now at L2, the Lagrange point on the far side of Earth from the Sun. A recent space.com article explains the motivation behind Chang'E 2's mission there.

NASA's NASA's Lunar Reconnaissance Orbiter is busily mapping the Moon from its science orbit. They've now released more than half a million enormous images of the Moon to the Planetary Data System. I love the dark, wispy landslides in a recent image release.

Out at Mars, it's early autumn in the southern hemisphere. (It's currently Ls 20.4.) It's Opportunity sol 2756, and the rover has been driving fast along the low mound of Cape York to a "lily pad," a location where a favorable slope will tilt its solar panels toward the north to improve power conditions over the Martian winter. The rover is not seeking a long-term parking spot, just a small region of favorable slopes in which it'll be able to do do short drives and reduced winter operations under good power conditions. The rover will park only for a brief period around the solstice, which comes in about five months. Here is Eduardo Tesheiner's latest route map and Google Earth kml file for Opportunity.

ESA's Mars Express is carrying on with an extended mission, planned to run through 2014. The Mars Webcam has been very busy this month. They recently announced that the diminutive camera is providing valuable science by following up OMEGA observations of carbon dioxide clouds. Mission designers take note: tiny, cheap context cameras are useful for both outreach and science.

NASA's Mars Reconnaissance Orbiter is keeping an eye on Mars' weather with MARCI; they report scattered water ice clouds but mostly clear skies for Opportunity. As I write this entry, the HiRISE camera is coming back online after going into safe mode on August 27; it sounds like they're planning on resuming imaging tomorrow. As always, check in on the latest captioned image releases from HiRISE for your dose of spectacular photos. Among recent releases is this one showing a leveed channel on a crater wall, which formed when lava was flowing across the landscape, partially filling in the crater.

NASA's Mars Odyssey is now the longest-lived spacecraft ever to operate at Mars. You can see the latest from its THEMIS instrument here. Here are some stacked lava flow fronts, complete with breakouts, on volcanoes that died a long time ago. Pictures like this always make me wonder: where and when was Mars' very last volcanic eruption?

NASA's Dawn spacecraft is now in the fifth of six High Altitude Mapping Orbit (HAMO) cycles -- each cycle comprises ten orbits and completely covers Vesta once. This phase of the mission is for global mapping; in particular, the fifth cycle is devoted to acquiring images of the globe from angles slightly off of vertical in order to compile information on Dawn's topography. Later this month, once the sixth cycle is complete, Dawn will begin spiraling down from its current height of 660 kilometers toward its Low Altitude Mapping Orbit at 180 kilometers' elevation. Here's a timeline summarizing the Vesta phase of the Dawn mission.

The NASA-ESA-ASI Cassini has been in an 18-day-long equatorial orbit of Saturn for a while now, and that's not going to change this month. Right now it's just finishing Rev 155, near its farthest distance from Saturn. Since the 18-day orbit isn't a multiple of Titan's 16-day one, there hasn't been a close encounter with Titan since the middle of September, and there won't be another one until mid-December. The major excitement this month is the last of three Enceladus flybys this fall, a 500-kilometer one on November 6. This very unusual flyby will be devoted toward RADAR imagery of Enceladus -- they'll do SAR imaging (the same kind of imaging they do on Titan). I am really looking forward to those images! There will also be lots of more distant photos of Titan taken to monitor its clouds. To see what Cassini's doing when, check out my long and detailed page on Cassini's tour of the Saturn sytem.

NASA's New Horizons has 10.9 AU to go to reach Pluto. There are 1264 days left until Pluto closest approach. It's on course for a January to July 2015 encounter with the Pluto and Charon system. Go to icehunters.org to help search for Kuiper belt targets for New Horizons!

Juno spacecraft is outbound from the Sun. It'll go well beyond Mars' orbit before it heads sunward again. An Earth flyby in August 2013 will send it on to a July 2016 Jupiter arrival.

JAXA's Akatsuki is now in solar orbit, on its long cruise to a second encounter with Venus. JAXA has tested the main engine and found that it produces very little thrust, only one ninth of its original full power. They are now considering how to insert the spacecraft into a Venus orbit from which they can do any useful science.

JAXA's IKAROS flew past Venus in December and has been operating successfully since May 21, 2010. They recently spun the spacecraft down and then spun it back up in the opposite direction. It is expected to run out of maneuvering fuel some time between November and January. Follow the IKAROS blog to keep up with its contacts with Earth. It is getting much harder for Earth to pick up its faint signals.