Looking down on a shooting star

This photo is making the rounds of Twitter, Facebook, Google+, and whatever other social network you care to name today. It was shot by astronaut Ron Garan from the Space Station, and it's a meteor seen from above. Way cool. 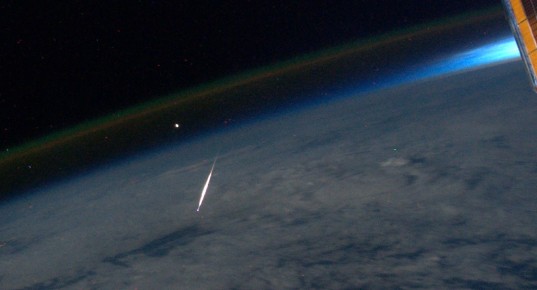 Astronaut Ronald Garan took this photo from the space station on August 13, 2011. The bright trail of a meteor burning up in the atmosphere is very likely a Perseid, a tiny piece of comet Swift-Tuttle, whose trail of dust produces a reliable meteor shower every year around August 12 and 13.

Garan shared it initially via Twitter, and it's pretty much on every space blog today. A couple of bloggers who've added value to the pic include Phil Plait, who tells us the odds that it is a Perseid and not something else (1 in 12) and the likelihood of the Station getting hit by a meteor large enough to cause a visible fireball (not very big); and Daniel Fischer, who dug up various other images of "shooting stars" seen from space. My favorite of his links is one to this video, the STS-61 highlight reel. (STS-61 was the first Hubble servicing mission.) At about 21:35 they show another bright meteor streaking across the sky over the night lights of Houston. Keep watching the video and at about 22:30 you'll see a lovely little image of Hubble, just a point of light from the Shuttle, which the astronauts referred to as their "morning star," following them in orbit.