What's up in the solar system in December 2010

The year is racing to a close — I can't believe December is here already! This month will see Japan's Akatsuki join Venus Express at Venus; that happens on December 6 at 23:49 UT (December 7, Japan time). Cassini will perform a second of a pair of 50-kilometer Enceladus flybys (the first happened early today). Opportunity should, if she keeps up her current pace, arrive within spitting distance of Santa Maria crater. And, closer to home, there'll be a total lunar eclipse over the night of December 20-21.

Here's Olaf Frohn's map of where everybody is on December 1. Compare it to last month's diagram to see how things have moved. 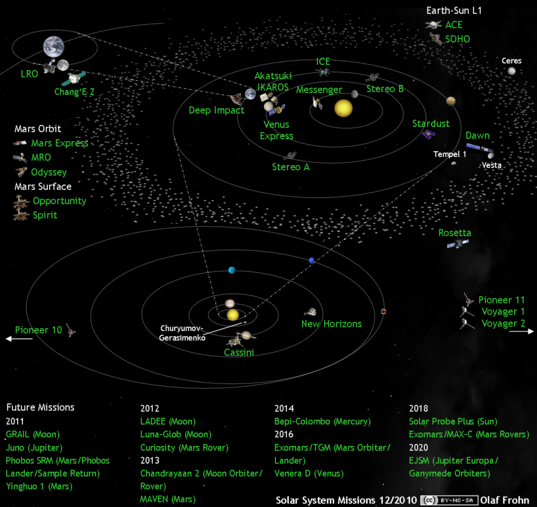 Moving on to more detailed accounts of the active planetary exploration missions:

NASA's MESSENGER spacecraft is cruising along, with only 107 days remaining until Mercury orbit insertion (which is planned for March 18, 2011). Check their gallery for their latest image releases. Last month, they released an 18-Megabyte image of the Caloris basin, a mosaic of many individual images from the first flyby.

ESA's Venus Express, like ten other ESA missions, won a three-year life extension from ESA last month, meaning it gets to carry on its work at Venus through 2014. A press release just posted today discusses a new article in Nature Geoscience about the origin of an odd sulfur dioxide layer in Venus' atmosphere, and what that might mean for Earth's climate.

JAXA's Akatsuki will arrive at Venus next week! Its orbit insertion burn begins at 8:49 a.m. Japan Standard Time on December 7 (23:49 December 6 UT), and will last 12 minutes. I'll post more extensively about the mission later this week.

JAXA's IKAROS, too, is flying toward Venus, and according to this kawaii animation, it will pass Venus (without entering orbit) on December 18. If I understand the Google translation of the IKAROS blog correctly, there will be a communications blackout for IKAROS as Akatsuki passes through its critical orbit insertion phase, so they are preparing for IKAROS to operate autonomously for a few days.

Apart from the posting of those cool deployment and rocket-firing self-portrait videos, China's Chang'E 2 lunar orbiter has been extremely quiet this month.

NASA's Lunar Reconnaissance Orbiter is busily mapping the Moon from its science orbit. They continue to select terrific photos to publish in their gallery, but their site has been down for me all afternoon so I can't point you to a specific one.

Out at Mars, the seasons have shifted; the equinox has passed and it's early spring in the southern hemisphere, so days are now longer than nights. (It's currently Ls 190.4°.) Today it is Mars Exploration Rover Spirit sol 2456 and Opportunity sol 2436. Spirit has still not been heard from since sol 2210 (March 22). It's now getting less likely that we'll ever hear from Spirit again. But there is still reason to hope -- and more than hope, to keep commanding Odyssey to listen for that elusive signal. But Opportunity has rolled on. She pulled off another 800-meter (or more!) month. She's now just a kilometer from the crater named Santa Maria, and a little more than 7 kilometers separates her from the nearest bit of Endeavour crater's rim. Here is Eduardo Tesheiner's latest route map and Google Earth kml file for Opportunity.

ESA's Mars Express mission posted a really fine view of Phoenix Lacus (a very big part of the Valles Marineris canyon system) last month. In this month's Mars Webcam photos, Mars is growing from crescent to quarter phase again (the phase of Mars Webcam images results from the current location of Mars Express' orbital apoapsis). One recent set had some neat high-altitude clouds that cast shadows on the surface below them.

NASA's Mars Reconnaissance Orbiter The latest MARCI weather report speaks of widespread dust activity, but clear skies over both rovers. As always, check in on the latest captioned image releases from HiRISE for your dose of spectacular photos from Mars. Here's a really funky landscape of polygonal terrain with superimposed (or "sub"imposed? it's hard to tell) pits.

NASA's Mars Odyssey remains the longest-lived spacecraft in orbit at Mars. You can see the latest from its THEMIS instrument here. I always love images of streamlined islands, because they clearly tell a story of a Mars that just doesn't exist anymore.

The NASA-ESA-ASI Cassini mission spent nearly all of November (from November 2 to 24) in safe mode, due to a flipped bit in a really bad spot in one of its computers. But it's back in action now and, in fact, had a very close targeted flyby of Enceladus just two hours after its periapsis today, right after a really nice set of views of Hyperion on Sunday (the 28th). These activities are described in the rev 141 Looking Ahead article. At present Cassini is on the outbound leg of 20-day-long Rev 141; it'll reach apoapsis, beginning rev 142, on December 10, and do a repeat close flyby of Enceladus on December 21. The orbital inclination is now nearly zero, so I expect to see lots of fine pictures of moons showing up on the raw images website over the coming weeks; the Looking Ahead article mentions Daphnis, Pan, Pandora, Dione, Tethys, and Rhea. There were a couple of big press releases this month that I haven't had time to investigate: today they wrote of the hottest temperatures yet measured in Enceladus' tiger stripes in data from an August flyby, and the detection of an oxygen-containing exosphere at Rhea. As I mentioned last month, Details here.