"A very sad story": No rings for Rhea after all

A couple of years ago, a story published in Science made a big splash: Rhea, Saturn's second-largest moon, appeared to have rings. The evidence was from the MIMI instrument on Cassini. During a flyby on November 26, 2005, MIMI detected something blocking the flow of electrons in Rhea's neighborhood, something that made three pairs of dips on each side of the moon. 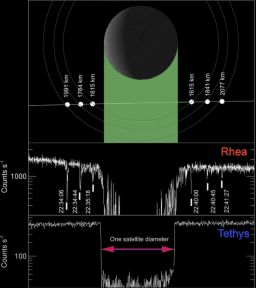 As Cassini flies by the icy moons, its Magnetospheric Imaging Instrument (MIMI) measures the flow of electrons through Saturn's magnetosphere. In a flyby of Tethys, the flow of electrons was constant until it was blocked by the bulk of the moon, then the flow resumed when Cassini came out of the moon's shadow. However, during the November 26, 2005 flyby of Rhea, MIMI witnessed a decline in the flux of electrons within Rhea's gravitational influence, as well as three pairs of steep drops in the electron flux that may indicate the presence of three rings (or ring arcs) in orbit around the moon.
The MIMI team said they were evidence of rings, but "I'm here to tell you that this is not true," Matt Tiscareno said during his talk at the icy moons session at the Division of Planetary Sciences meeting on Monday morning. "It is a very sad story." This in spite of the fact that another piece of evidence has since been found in favor of the possibility of a ring at Rhea, namely, a line of spots on the surface perfectly aligned with Rhea's equator, the sites of the possible impacts of a bunch of ring particles.

This image covers the entire equator of Rhea, Saturn's second largest moon. It is a map of Rhea's infrared reflectance divided by its ultraviolet reflectance; brighter areas are "redder" and darker areas are "bluer." There is a line of dark spots running across 75% of Rhea's equator, tiny spots that are relatively bright in ultraviolet wavelengths, an indicator of fresh impacts. Their coincidence with the equator is unusual, and may indicate the impact of a short-lived ring onto the surface of Rhea.
Tiscareno explained that Cassini's cameras have now done extensive surveys in search of even the faintest of rings. I was under the impression that if the rings contained the right size of particles -- too large to be forward-scattering like the dust in Saturn's rings, too small and sparse to be individually resolved -- but according to Tiscareno, Cassini's cameras should, in fact, have been able to spot whatever was causing the MIMI signature if they were, in fact, a set of particles orbiting Rhea. He said Cassini's taken 64 images targeted with Rhea just off the edge of the frame, once at high phase (where small particles would scatter light forward to Cassini) and four times with very long exposures from lower phase angles. Despite the images being "pretty ratty," he was able to put upper limits on the brightness of rings and density of particles.

So he has a limit -- what if the rings are just sparser than the cameras can see? The first response from the MIMI team is that the particles were likely about a millimeter in diameter, which would be enough to make the signatures they saw yet not be detectable by the cameras. But, Tiscareno said, there's a problem. As the particles get larger, not only do they stop scattering light the way tiny particles do (making them harder to see when lit from behind), but they also don't block electron flow the way tiny particles do. The upper limit on the amount of mass in the ring imposed by the camera measurements is four orders of magnitude (that's ten thousand times) smaller than the amount of mass that would actually need to be in the form of millimeter-sized particles in the ring in order to produce the observed MIMI measurements.

So Rhea doesn't have rings. But that leaves the Cassini team with yet another puzzle. Something weird was happening in that MIMI signature. It actually wasn't observed on a subsequent flyby. "There is something really remarkable going on in physics" near Rhea, Tiscareno said. "Unfortunately it's not ring physics. Unfortunately for me anyway, because my funding is to do rings science.