NASA just press-released some recent new views of Vesta, one of the largest denizens of the asteroid belt, soon to be visited by the Dawn spacecraft. The movies were taken in short wavelengths (ultraviolet and blue) by Hubble's relatively new camera, the Wide Field and Planetary Camera 3. The movie is terrific; it really gives a sense of the asteroid's shape. Is it me, or is there a really big, deep crater on the equator? Or is it just an especially dark patch of material?

redit: NASA / ESA / STScI / UMd
stronomers combined 146 exposures taken by NASA's Hubble Space Telescope to make this 73-frame movie of the asteroid Vesta's rotation. Vesta completes a rotation every 5.34 hours. The images were taken in near-ultraviolet and blue wavelengths, so the movie is not representative of what the human eye would see. Dark areas are interpreted to be regions of basalt; red areas are likely "regolith" or dust. The observations were made on February 25 and 28, 2010.

Here's a still from the same set of observations: 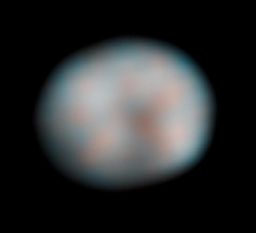 And here, for comparison's sake, is an earlier Hubble movie of Vesta, taken with WFPC3's predecessor in 2007.

This animation is composed of 20 images of Vesta captured on May 14 and 16, 2007 by the Wide Field Planetary Camera 2. Vesta has a mean diameter of approximately 530 kilometers (330 miles), but is slightly shorter pole-to-pole (464 km / 288 mi) than it is at the equator (570 km / 354 mi) and rotates in 5.34 hours. The colors are not true colors but do show color variations across the surface.
The press release associated with the image points out that the new images are aimed at a different position on Vesta's surface than the 2007 observations, in fact, a full 90 degrees away. The new observations have apparently required astronomers to update the pole position of Vesta by four degrees. This may not sound like a big change, but it's actually quite important, because it means that Vesta's equinox is a month later than the Dawn mission planning team thought. That, in turn, means that the solar illumination of Dawn's surface (especially near its poles) will be different than they had planned for; so they'll need to adjust their science plans for when they plan to acquire images, particularly over the poles, in mapping the asteroid.

The research on these images was published in Icarus in July by Jian-Yang Li et al.: "Photometric mapping of Asteroid (4) Vesta's southern hemisphere with Hubble Space Telescope". I'm sure I could find the answer to my question about that equatorial dark patch in this paper -- but don't have time to read it just now, unfortunately.