June 2010 was certainly busy with Hayabusa and IKAROS action, so I really needed a vacation. I am taking just a couple of hours toward the end of that vacation to check in with the following "What's Up" report, anticipating that it'll help me not be totally lost when I return to work next week.

The main thing to look forward to will be Rosetta's July 10 encounter with asteroid Lutetia. That's a Saturday and I'll be on a plane during the main drama, but ESA has been doing a tremendous job lately of providing information on the Internet; next week I will prepare a detailed preview post with information on where you can watch the events unfold.

It's also worth noting that today is the first day of the rest of Cassini's life -- its Extended-Extended Mission, or XXM, or Solstice Mission officially started today, the two-year Equinox Mission or XM having finished yesterday.

Now to briefly check in with everyone else in the solar system...

NASA's MESSENGER spacecraft is cruising along, with less than a year remaining until Mercury orbit insertion (which is planned for March 18, 2011). Check their gallery for their latest image releases, which seem to be coming out twice a month or so these days.

ESA's Venus Express remains quiet, but its data were discussed last month at a conference in Aussois, France. That article is mostly background; the one Venus Express-related fact in it is that "Venus Express has measured the rate of [atmospheric gas] escape and confirmed that roughly twice as much hydrogen is escaping as oxygen. It is therefore believed that water is the source of these escaping ions." Getting at Venus' water budget is very important for understanding its geology and evolution, but it sounds like all water-related questions are still mostly unanswered.

JAXA's Akatsuki en route to join Venus Express at the second planet. It is now cruising and in good shape, scheduled for Venus arrival in "late December." The only piece of information I can glean from its latest Twitter updates is the fact that Akatsuki scientists participated in the Aussois meetings -- one assumes they were discussing the exciting opportunity of doing concurrent observations from their very different orbits once Akatsuki arrives. (Venus Express has a polar orbit, while Akatsuki will have an equatorial one.)

JAXA's IKAROS, too, is flying toward Venus. Last month was an eventful one, with the successful deployment of the sail, generation of solar power, and testing of their LCD control surfaces. Maybe they will be able to test actual sailing this month! We'll see!

NASA's Lunar Reconnaissance Orbiter is busily mapping the Moon from its science orbit -- in fact, yesterday was the first anniversary of the first images being received from lunar orbit. Check their gallery for the latest awesome pics, and don't forget to check the LOLA image of the week site too.

NASA's Deep Impact safely flew past Earth on June 27 for a gravity assist to help it to reach its November 4 flyby of comet 103P/Hartley 2. The mission's latest status update said they're still waiting for post-flyby data but have no reason to expect any problems, given the spacecraft's past precise performance. The new orbit has a 14-month period and will set up (after a few more deep-space maneuvers) a 700-kilometer flyby of the comet a few minutes before 14:00 UTC on November 4. Observations will begin on September 5 and continue through November 25, which will mark the end of scientific observations for the Deep Impact extended mission. Meanwhile, Sunday marks the fifth anniversary of the flyby of Tempel 1 -- amazing!

Out at Mars, the southern winter solstice has passed, (it's currentlyLs 112.1°), which means that the rovers' nights, though long, are getting shorter every sol. Today it is Mars Exploration Rover Spirit sol 2308 and Opportunity sol 2288. Spirit has still not been heard from since sol 2210 (March 22). The orbiters continue to listen for signals from Spirit during scheduled passes, and the Deep Space Network also listens every day. Opportunity is steadily driving eastward, eating up the kilometers separating her from the rim of Endeavour crater; I loved the recent "super-resolution" view of Endeavour's rim with its newly named features like Cape Tribulation. Here is Eduardo Tesheiner's latest route map and Google Earth kml file for Opportunity. A. J. S. Rayl has just posted her monthly rover update, which has details on a major scare that happened with Opportunity's camera mast this month (I'll spoil the punch line by reassuring you that all is now well).

ESA's Mars Express mission announced the publication of some recent research combining their OMEGA results with higher-resolution CRISM data to find evidence for widespread water alteration of rocks in Mars' northern lowlands, a new result. And nearly every day, new images from the Mars Webcam show up.

Mars Reconnaissance Orbiter is humming along in normal science operations. The latest MARCI weather report discusses how during the current season, high summer in the northern latitudes, sublimation of the residual water ice cap makes for lots of water vapor in the atmosphere, so lots of water ice clouds elsewhere on the planet, especially around the big volcanoes. As always, check in on the latest captioned image releases from HiRISE for your dose of spectacular photos from Mars.

NASA's Mars Odyssey remains the longest-lived spacecraft in orbit at Mars. You can see the latest from its THEMIS instrument here.

ESA's Rosetta mission is rapidly approaching its July 10 encounter with the asteroid 21 Lutetia. Closest approach will be at a distance of 3169 kilometers at 15:44:55.51 (plus or minus 7.43 seconds) UTC. I'm watching the Rosetta Blog for news and updates on the status of the mission. Look for a post from me next week (probably Tuesday) with more details about the upcoming encounter. If you have a blog or Twitter and plan to post about the encounter in real time, please send me an email or Tweet me to let me know to follow you!

Congratulations to the NASA-ESA-ASI Cassini mission on surviving six years at Saturn! In reward for its hard work, the spacecraft is being given seven more years of hard work, the so-called Extended-Extended mission or XXM. Cassini has just begun Rev 134, a moderately inclined orbit, but the next Titan flyby on July 7 will return the spacecraft pretty close to the ring plane again; so the first few days of the orbit will be devoted to lots of ring stuff, while Cassini still has a good view. According to the Rev 134 Looking Ahead article, we have the closest-ever images of the moon Daphnis (the one that orbits within the Keeler gap near the outer edge of the A ring) to look forward to on July 5 -- but even from a relatively short 72,000 kilometers away, the diminutive moon will only appear 20 pixels across. The rest of the month looks to be pretty quiet, with no moon encounters (not even Titan) in all of the 20-day rev 135. The next big event to look forward to will be a targeted encounter with Enceladus, the first of twelve (twelve!!) in the XXM, on August 13. 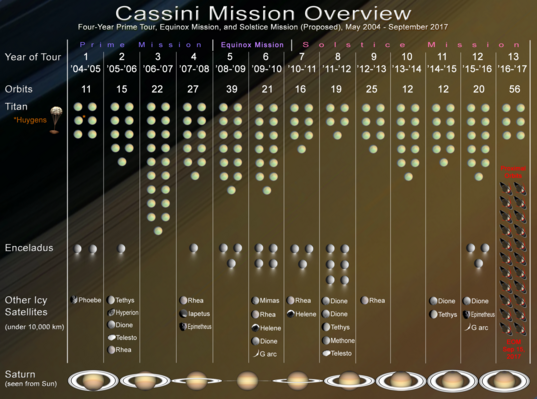 NASA's Dawn is now in the asteroid belt for good, and is steadily thrusting with its ion engines, patiently propelling itself toward a rendezvous with Vesta in July 2011. I just posted Marc Rayman's latest Dawn Journal, which mentions a slightly worrying issue with one of Dawn's four reaction wheels, which the mission is still examining.

All systems on NASA's Stardust are "nominal" as less than a year remains until its flyby of comet Tempel 1. Closest approach will happen at 8:42 p.m. PST on February 14, 2011, or 04:42 February 15 UTC. The mission is busy performing instrument and electronics checkouts this week. I was thrilled to see the actual Stardust return capsule on display in the National Air and Space Museum this week, and took a photo of its reentry-blackened blunt nose. I told my daughter about how it had been to a comet and back!

NASA's New Horizons has 14.85 AU to go to reach Pluto. It's still on course for a January to July 2015 encounter with the Pluto and Charon system. They announced today that a trajectory correction maneuver performed yesterday has successfully reset the spacecraft's course for Pluto. It had drifted slightly off course because of -- get this! -- "a tiny amount of force created from thermal photons from New Horizons' radioisotope thermoelectric generator (RTG) power source -- reflecting off the backside of the spacecraft's high-gain antenna." These are the kinds of effects that people seeking to solve the Pioneer Anomaly are looking at, but I am not aware of thermal photons leaking from an RTG leading to a necessary course correction before. It just goes to show how unbelievably precise our tracking is -- and must be -- in order to navigate to such a tiny, out-of-the-way destination as the Pluto system.

Finally, NASA's Voyager 1 and 2 spacecraft are still going strong. I'm enjoying following the relatively active Twitter feed of Voyager 2, which also mentions the position of Voyager 1 once a day. The kids and I paid homage to Voyager 2 as well as Pioneer 10, Magellan, and the Apollo program with a visit to the National Air and Space Museum on Tuesday.

Some other milestones to take note of this month, taken from JPL's Space Calendar: