A podcast, a space carnival, and a New Horizons Planetary Radio Q and A

I'm a bit late to posting these three items:Yesterday's 365 Days of Astronomy podcast was recorded by yours truly, on the anniversary of the impact of 2008 TC3.

You can find Carnival of Space #123 at Weird Warp.

And this week's Planetary Radio features Jessica Sunshine on that spectacular discovery of very tiny amounts of water all over the Moon. On "Questions and Answers" I answered this question:Is there a possibility of New Horizons going into safe mode just before closest approach, like MESSENGER did?" 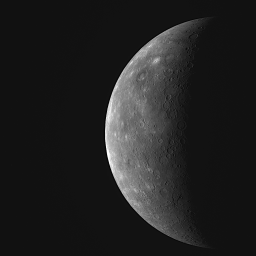 MESSENGER captured this image of Mercury on approach to its third flyby, at about 19:47 on September 29, 2009.
A lot of people got concerned about New Horizons after MESSENGER's third Mercury flyby. Just a few minutes before MESSENGER's closest approach to Mercury on September twenty-nine, twenty-oh-nine, its computer detected something it didn't like about its power supply and shut down all of the spacecraft's science instruments, then began calling Earth for help. So MESSENGER never performed most of the science observations that had been planned for the encounter.

Although the safe mode was disappointing, it's not that big a deal. The number-one goal of MESSENGER's three Mercury flybys was to use Mercury's gravity to slow the spacecraft so that little Mercury will be able to capture MESSENGER into orbit in twenty-eleven. Any science data that MESSENGER managed to get during the three flybys was just taking advantage of an opportunity. It wasn't critical to mission success. So the mission team had conservative limits on the spacecraft's autonomous health checks.

New Horizons' Pluto encounter is a totally different story. New Horizons gets only one shot at gathering high-resolution data, and then it travels on into the Kuiper belt, never to see Pluto again. New Horizons will be instructed not to go into safe mode for a nine-day period around closest approach, because it'd take nearly nine hours for a call for help and radio response to make the round trip from Pluto to Earth and back. If a problem happens, the spacecraft will just have to do its best to correct for it all by itself.