The September-October 2009 issue of The Planetary Report is out

By now Planetary Society members should have gotten (or should shortly get) their copy of the September-October 2009 issue of The Planetary Report in the mail. This one features a fascinating article by Tom Jones and Ellen Stofan on comparative planetology, updates on Society projects, and our annual book review feature to help guide your holiday shopping. If you're a member, check your mailbox or download an electronic copy of the magazine from the For Members area of this website. If you're reading this and you're not a member, you should be! Join here! 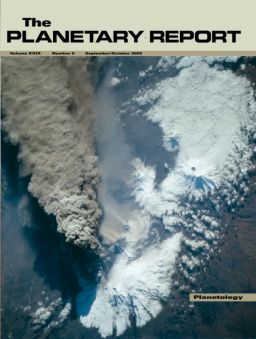 Space shuttle astronauts took this optical photo of Russia's Kliuchevskoi volcano in the early hours of its eruption on September 30, 1994. The ash plume, which reached a height of more than 18 kilometers (about 11 miles), is emerging from a vent on the north flank of Kliuchevshoi, which is partially hidden in this view by the plume and its shadow. The small, whitish steam plume near the photo's center is emanating from the dome of a companion volcano, Bezymianny. This is part of a sequence of photos that first allowed scientists to image through ash and cloud. To see a radar version of this photo, go to jpl.nasa.gov/radar/sircxsar/kliucomp.html.