Venus looks more boring than you think it does

The MESSENGER team posts one captioned image per week from their previous encounters. These have mostly been of Mercury but once in a while they toss in an image from one of their two Venus encounters, which happened on October 24, 2006 and June 5, 2007. Today's was this view revealing Venusian cloud features. It's a bit unusual in that genre, because most of the time when you see a picture of Venus with cloud features, it was taken through an ultraviolet filter; the clouds are streaked with some as-yet-unknown "UV absorber" that really makes their shapes pop. This image, by contrast, was taken through a red filter; it's a testament to the fine quality of MESSENGER's camera that so much detail is visible at this wavelength. 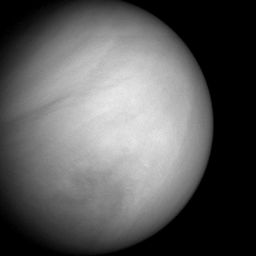 MESSENGER captured this view of the planet Venus on approach to its second flyby on June 5, 2008. The contrast in the image, which was taken through a narrow-band filter centered at 630 nanometers (red), has been stretched to bring out subtle cloud features.
Nearly every image of Venus that is in the public domain has been processed to enhance the subtle details in clouds. But if you were flying near Venus, you'd likely see none of that. What you'd see is this (assuming you were wearing dark glasses -- Venus would be almost unbearably bright to our eyes): 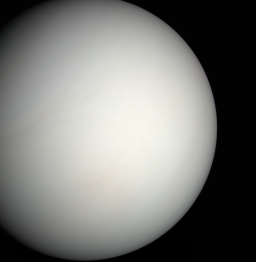 Venus in natural color from MESSENGER

This view of Venus was composed of images taken through red, green, and blue filters by MESSENGER on June 5, 2007 as it approached for its second flyby. Seen in natural color, Venus is nearly as featureless as a cue ball.
Yes, that's a true color view, composed of red-, green-, and blue-filter images. Venus is brilliant, but very very bland. Which is why montages like this one are a pet peeve of mine: 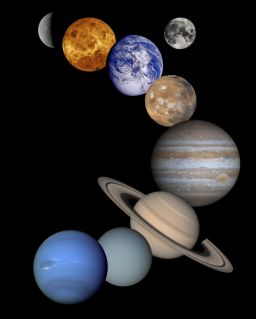 A montage of the planets dating from March 29, 2001. (Pluto is not included not because it wasn't considered a planet then, but because the image is from the Jet Propulsion Laboratory's Planetary Photojournal, a site for the distribution of JPL missions' photos of the planets. There had been no missions to Pluto.)
All the planets are shown as they appear in natural color, though the contrast and saturation have been goosed a bit to make them more dramatic. Except for Venus. The view of Venus is based upon Magellan radar images that penetrated the clouds, and on top of that they were colorized that garish orange color.

So if you're going to make your own planet montage, avoid the Magellan images, and avoid the equally garish Pioneer and Galileo ultraviolet-filter views like this one. 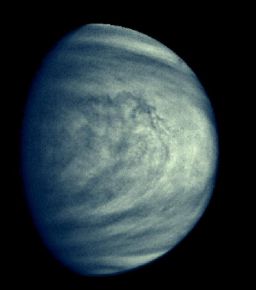 A Galileo view of Venus through a violet filter reveals U-shaped patterns in Venus' upper atmospheric clouds. The entire atmosphere of Venus rotates in an east-to-west fashion.
Instead, consider using one that shows Venus more as it would appear to a spaceborne observer. I think this view is a nice compromise. It shows some cloud features with slightly enhanced color, but still gives the impression of Venus as a thickly cloud-shrouded world. 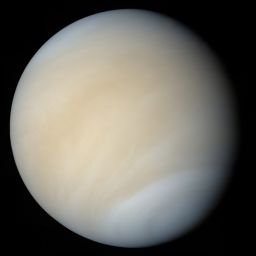 This view is processed from 78 Mariner 10 frames captured through orange and ultraviolet filters. It is intended to look approximately natural in color, though the use of the ultraviolet images makes cloud patterns more visible than they would be to the human eye. Processed by amateur Mattias Malmer.

Also added extra detail by adding the difference between uv and orange to the image. (almost the same as doing unsharp masking but with more predictable results.) Speaking of MESSENGER, it's on course for its third flyby of Mercury on September 30, a week from Wednesday. I have been pestering the team to get a hold of their science plan for my usual preview timeline story, but don't have it yet. They just announced this morning that there'll be a press briefing this coming Wednesday about their plans, which I will of course be watching and reporting on. In the meantime, they've posted some preliminary planning information here.