The discovery of asteroid 2008 TC3 just before it crashed to Earth was one of the most amazing stories of last year, even before its remains were discovered strewn across the Nubian desert a few months later, turning it into the first asteroid ever that was studied both in space and after it became a meteorite. Now the story has come full circle: here's a photo of asteroid hunter Richard Kowalski (past winner of one of The Planetary Society's Gene Shoemaker Near Earth Object Grants) holding a tiny piece of Almahatta Sitta, the name given to the meteorites that are all that's left of asteroid 2008 TC3. Kowalski is standing in front of the 1.5-meter telescope at the heart of the Catalina Sky Survey, one of the most productive facilities in the global campaign to hunt for near-Earth asteroids. The piece of the asteroid was a gift to him from friends and well-wishers on the Minor Planet Mailing List, which Kowalski founded in order to help connect professional and amateur astronomers. An MPML member (and another Shoemaker grant winner) Roy Tucker posted: "It's official! Richard Kowalski is the first person in history to possess a piece of an object that he discovered in space." 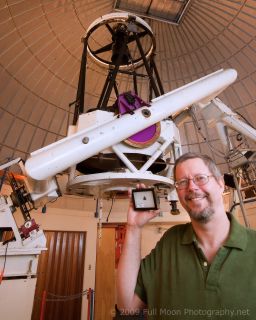 Richard Kowalski, founder and administrator of the Minor Planet Mailing List, holds a piece of Almahatta Sitta, the meteorite that is all that remains of asteroid 2008 TC3. 2008 TC3 was discovered by Kowalski using the 1.5-meter telescope (background) of the Catalina Sky Survey, located on the peak of Mt. Lemmon, near Tucson, Arizona.
In related news, the scientists who led the Sudanese field trip that recovered those pieces of Almahatta Sitta have now organized a workshop in Khartoum on the asteroid and its meteorites, followed by a weeklong field trip to search for more, from December 5 to 15 of this year. Read all about it here. The deadline for registration is very, very soon. I want to go to this workshop so badly I can taste it -- what a unique subject, venue, and opportunity!! -- and I'd pay my own way if money were the problem. But that's not the problem; the problem is the 5-month-old who's utterly dependent upon me. So I won't be going.

If there is anybody reading this blog who will be going and has any interest in writing any journal entries (in real time or after the fact) about the trip, I would desperately like to have any news about it for posting here -- send me an email.