Two great new planetary science-themed blogs have just started up, and rather than repost everything they've posted so far (which is what I've really wanted to do), I'll just give a summary and point you over there to read. Having done that, though, I'm sure I still won't be able to keep myself from reposting a bunch of their stuff. They just have too many pretty pictures to share.

The first one is Dr. Schenk's 3D House of Satellites. Paul Schenk is a researcher at Houston's Lunar and Planetary Institute whose specialty (well, one of his specialties) is figuring out the topography of outer solar system moons. He derives 3D information both from stereogrammetry (looking at two pictures of the same spot from different angles, the way humans see in 3D) and from photoclinometry (analyzing the lengths of shadows to determine heights of shadow-casting points). Here's a striking view from his recent entry on Enceladus: 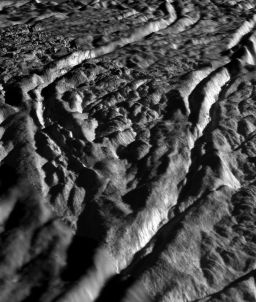 Baghdad sulcus is one of the "Tiger Stripes" that cross Enceladus' south pole, from which its geysers flow. Paul Schenk processed Cassini images to produce a digital elevation model of this region and create the perspective view of a deformed area between two splays of Baghdad sulcus. The ridges are 80 to 100 meters high.
And here's another, from his work on Uranus' moon Miranda: 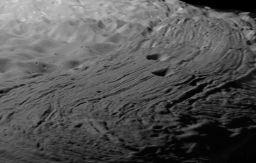 This is a frame from an animation of a flyover of a 3D view of Uranus' moon Miranda, made from a topographic data set developed by Paul Schenk from Voyager 2 images.
The second one is Planetary Images from Then and Now, by Ted Stryk. If you've read much of this blog you know how often I post images from Ted. He specializes in digging up underappreciated space image data, whether because it's old and difficult to work with, or just hard to find. He just restarted the blog after a hiatus of several years, and every post has been one I've wanted to share. I'll limit myself to just a few: 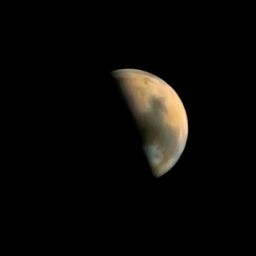 Mars Observer vanished just days before it was to enter orbit. This is one of two shots of Mars it took in August 1993, a month before its planned arrival. The original was grayscale; Ted Stryk has colorized it using ground-based images.