Planetary Radio Q and A: How do you know which way a star rotates?

This week's Planetary Radio features Hal McAlister, director of the Mount Wilson Institute; he had just returned to the peak after the worst fire danger had passed when Mat interviewed him. On "Questions and Answers" I answered the question:"They recently announced the discovery of an extrasolar planet that moves backwards around its star. How do they know which way the star rotates?"

Many thanks to Darin Ragozzine for explaining the following to me. 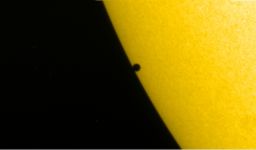 The 2006 Transit of Mercury

This image from the Transition Region and Coronal Explorer (TRACE) satellite shows the Sun in visible light at 19:13:01 UT on November 8, as Mercury's disk began to transit the Sun. Mercury is blocking a part of the Sun that rotates toward us, marginally dimming its most blue-shifted light.
Most planets orbit their stars in the same direction that the star itself rotates. That's because the star and its family of planets all formed from a single rotating disk of gas and dust. The star inherits its rotation and the planets inherit their direction of revolution from the original rotation direction of the disk. So the recent detection of a wrong-way planet named WASP-seventeen was newsworthy. But how could astronomers tell the direction in which the host star was rotating?

Please don't hesitate to send me an email if you have a planetary-science-themed question that you'd like to hear answered on Planetary Radio!